A Three-day Itinerary for Cappadocia and Pamukkale

One of the highlights in Turkey was my trip to Cappadocia and Pamukkale. In this blog post, I’ll explain how to make most of your time if you only have a few days to see both of these places. Time wasn’t an issue for me, but because of the cold weather in late November, I wasn’t keen on spending more time in Cappadocia and Pamukkale than I had to. So I left my big backpack in my hostel in Istanbul and decided to travel only with my small day bag.

Travel from Istanbul to Cappadocia

The first thing I did was checking the flight prices. Sometimes you can find pretty good deals in Turkey and get a flight as cheap as a bus ticket. I was flexible with my travel dates, and I found a cheap flight (20€) from Istanbul to Cappadocia (Nevsehir Kapadokya Airport). Turkish Airlines flies this route twice a day; there’s one flight in the morning and one in the afternoon. If you fly there in the morning, you’ll have a whole day exploring the town. I recommend you to book a hotel in advance and arrange a shuttle through them because the airport in Cappadocia is tiny and it could be difficult to arrange anything from there. 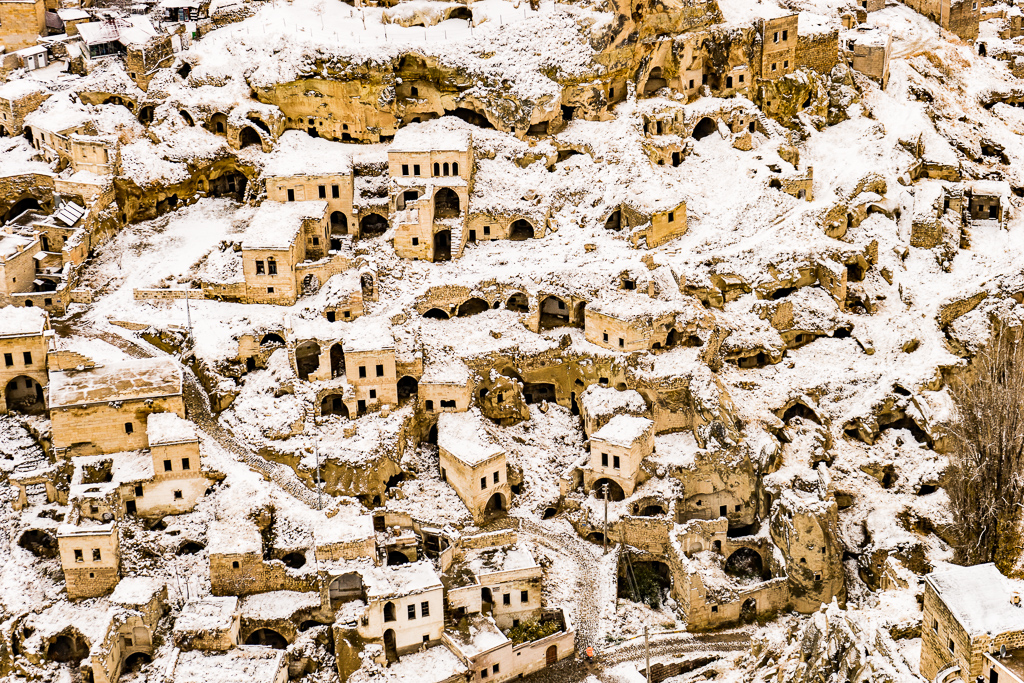 Cappadocia is full of unique “cave” hotels. I found my hotel on hotelscombined.com which combines all the hotel booking sites (Booking, Agoda, etc.) to give you the cheapest price and I found a dorm for 5€/night! It also turned out to be a private room because there was no one else staying there. You can check out the hotel here.

There are also a lot of luxury hotels, and I actually regret that I didn’t book a little bit more expensive place because it was low season anyway and the prices were down. Some really cool cave hotels I saw were these ones:

Book Your Bus Ticket to Pamukkale

I booked an overnight bus to Pamukkale for the next evening. Just go to Göreme bus station and ask for the options. Note that most of the buses only drive to Denizli bus station and from there you have to take another bus/shuttle to Pamukkale. My bus offered a shuttle from Denizli to Pamukkale, so I was fine when I arrived in Denizli 5 a.m. in the morning. I was traveling alone in Turkey as a female traveler and always felt safe, even when taking overnight buses. If you would like to read more about traveling in Turkey as a solo female traveler, read a post Solo Female Travel in Turkey. 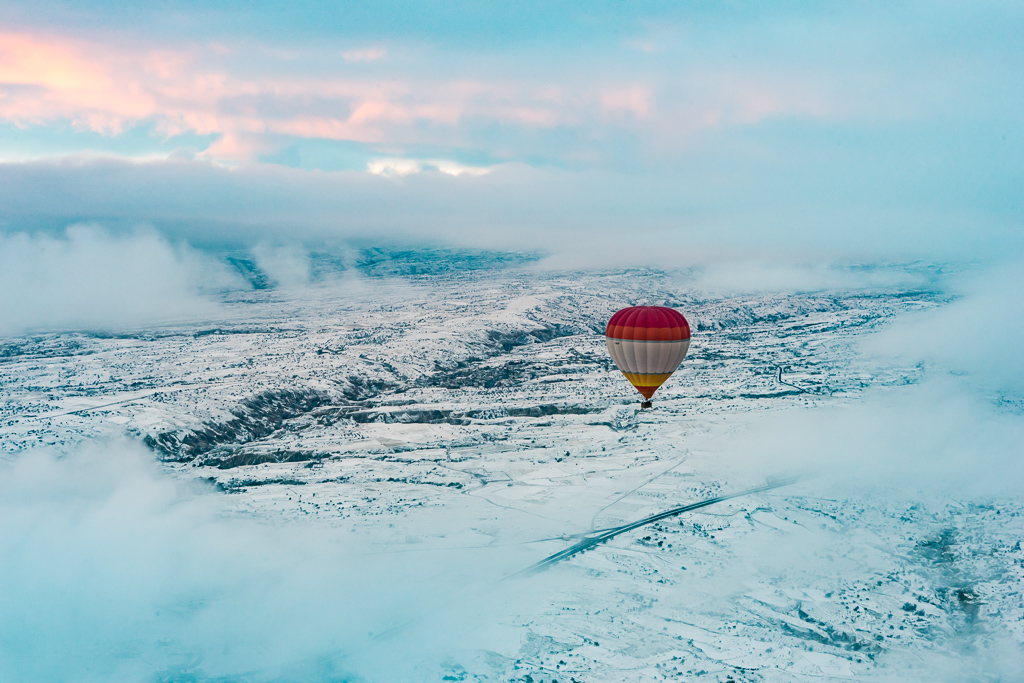 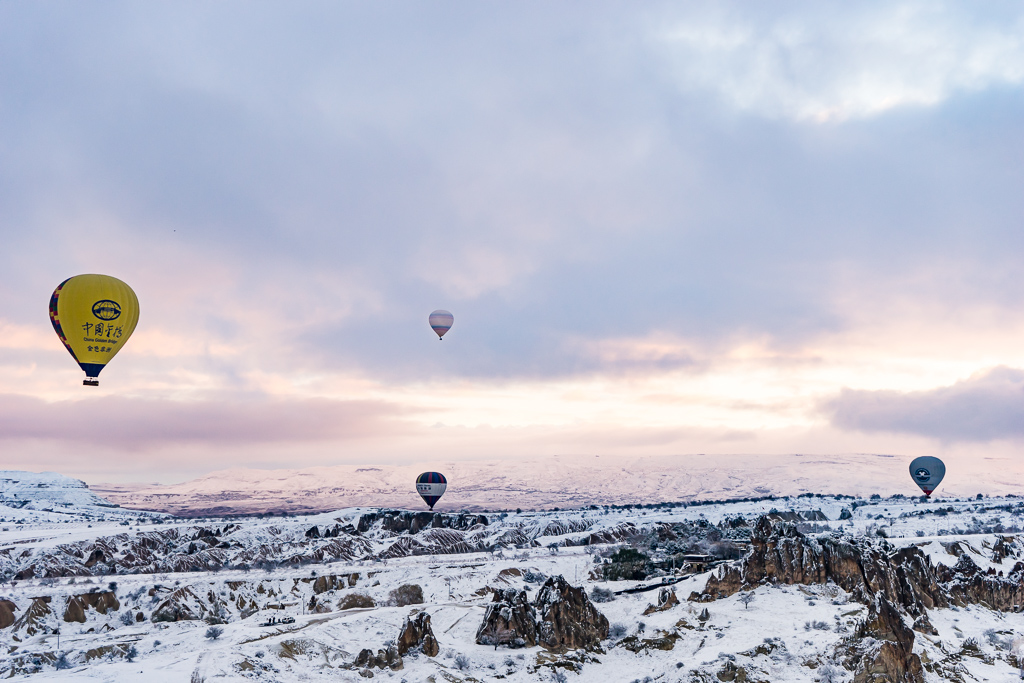 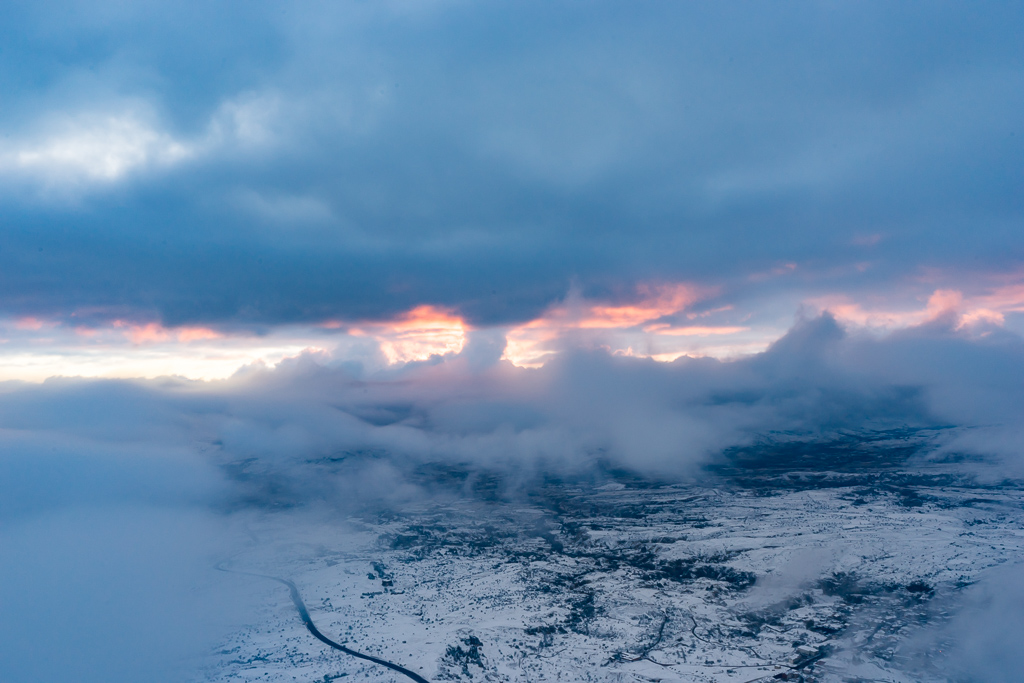 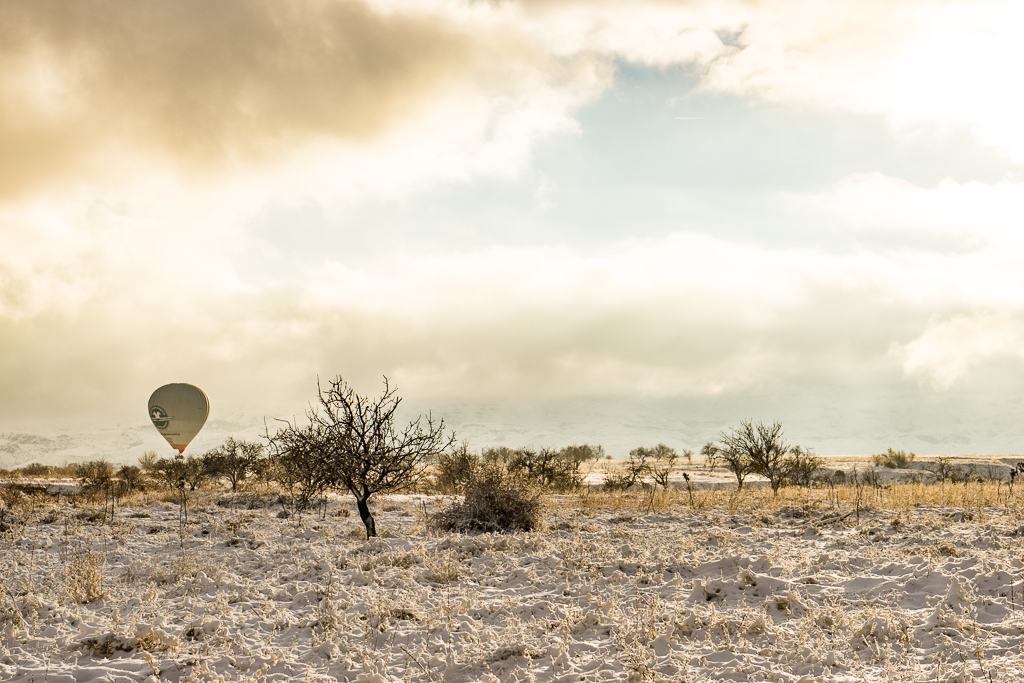 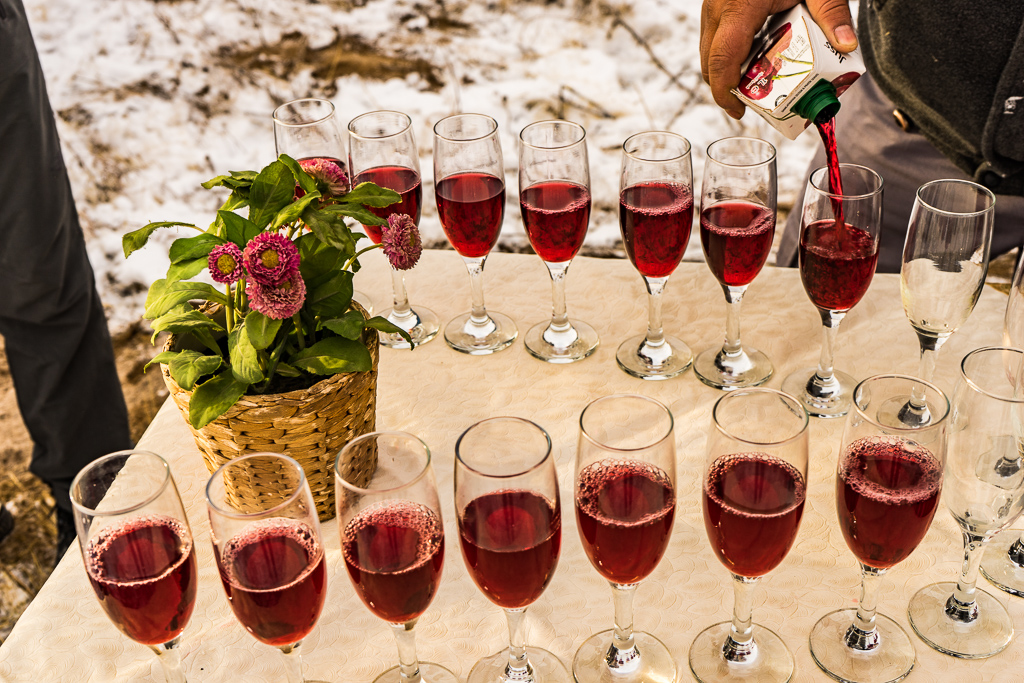 Everyone traveling to Cappadocia should do the hot air balloon ride. I had already booked my hot air balloon flight in Istanbul because my hostel there managed to get a cheap deal, and it only cost me 99€. I booked the flight for next morning, and the balloon company came to pick me up early in the morning (around 5 a.m.) so that we could be there just in time for the sunrise. This was my first hot air balloon flight ever, I’ve wanted to save this moment for something special, and Cappadocia definitely is a special place to do it. I did enjoy it, but because I traveled there late November, it was absolutely freezing. But the pictures turned out nice because it had been snowing the evening before, and it made everything look beautiful. For a more comprehensive review of the balloon ride, check out a post Hot Air Balloon Ride in Cappadocia by Drifter Planet. 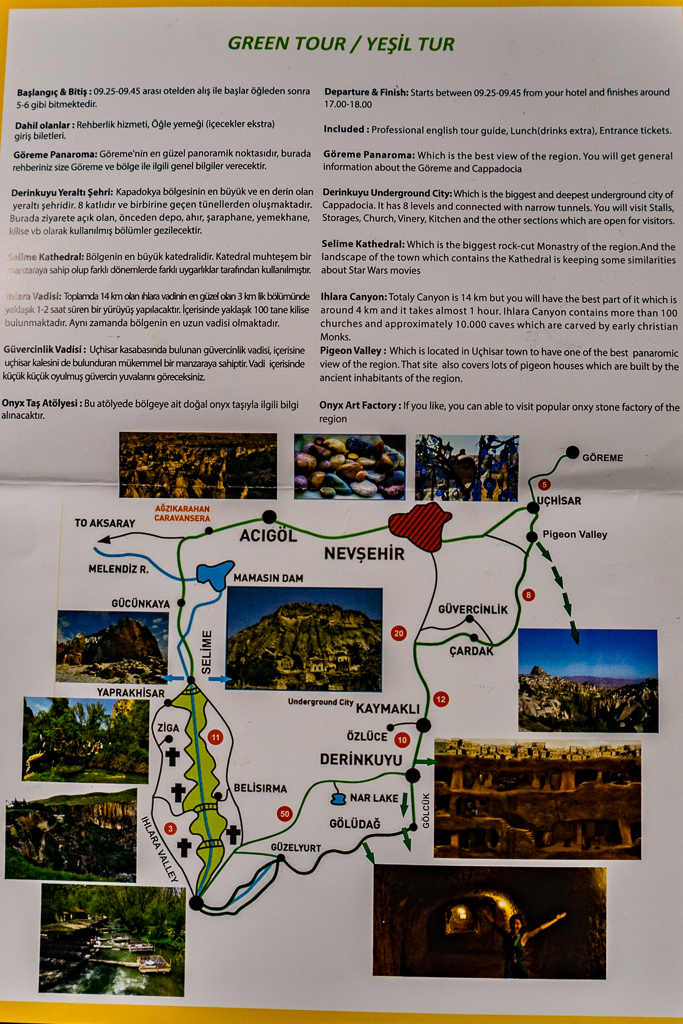 There are two popular tours in Cappadocia: The Green Tour and The Red Tour. Because I didn’t have much time there, I decided to ask which tour is the best, and everyone recommended the Green Tour. I booked the tour through my hotel in Cappadocia for the next morning as well. So after I got dropped back to my hotel from the hot air balloon flight, I had just enough time to check out and eat breakfast. Because I was traveling only with my small bag, I didn’t need to leave anything at the hotel, and I just took my bag with me for the tour. 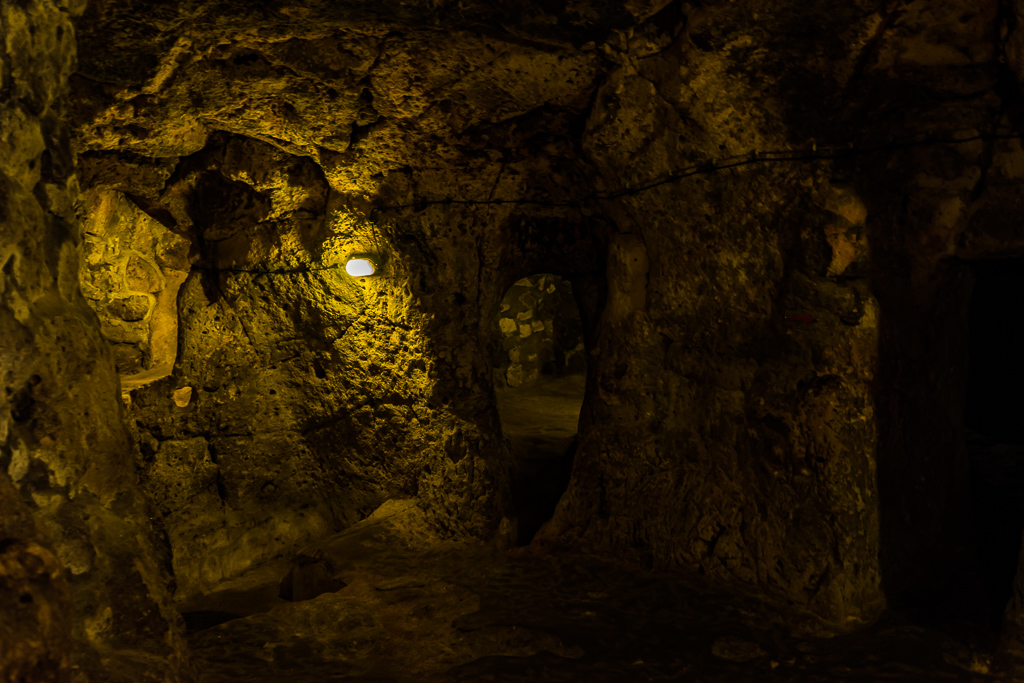 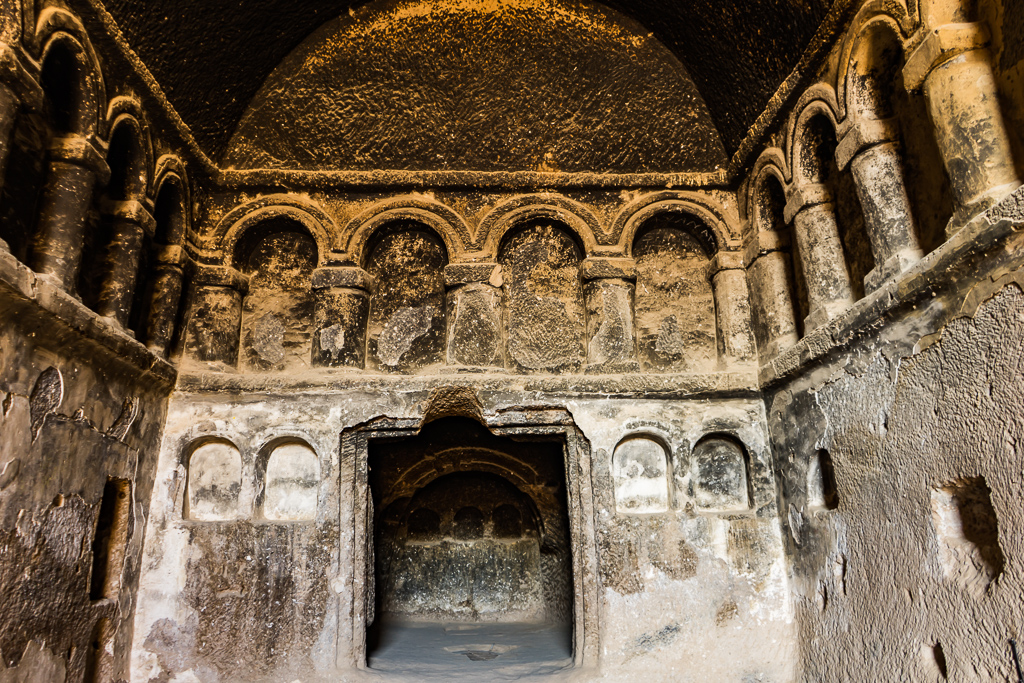 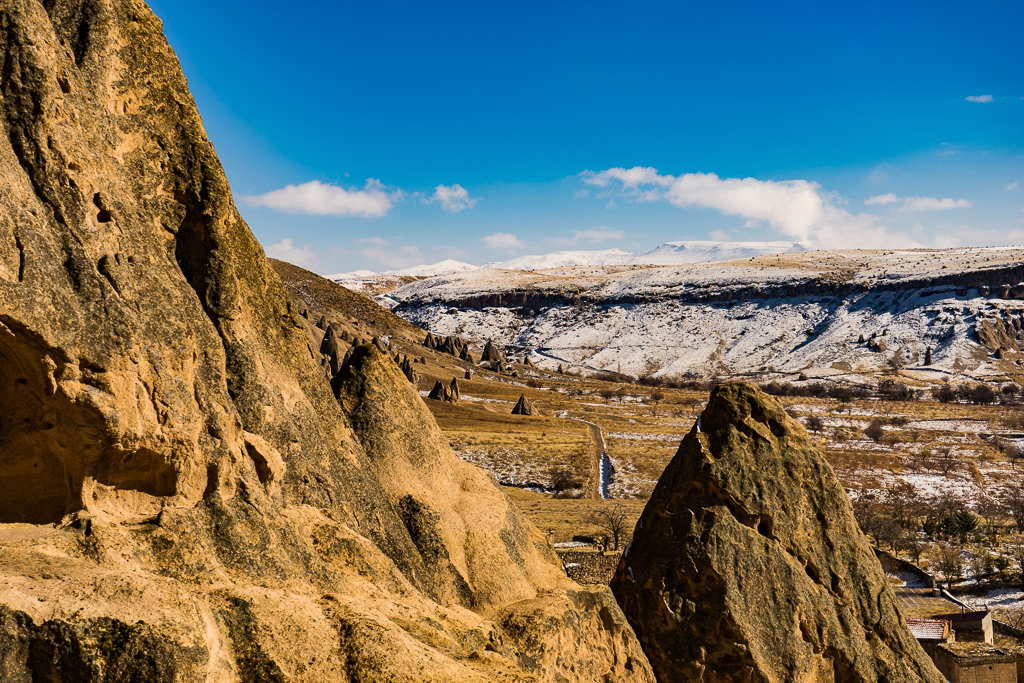 The View from Selime Monastery 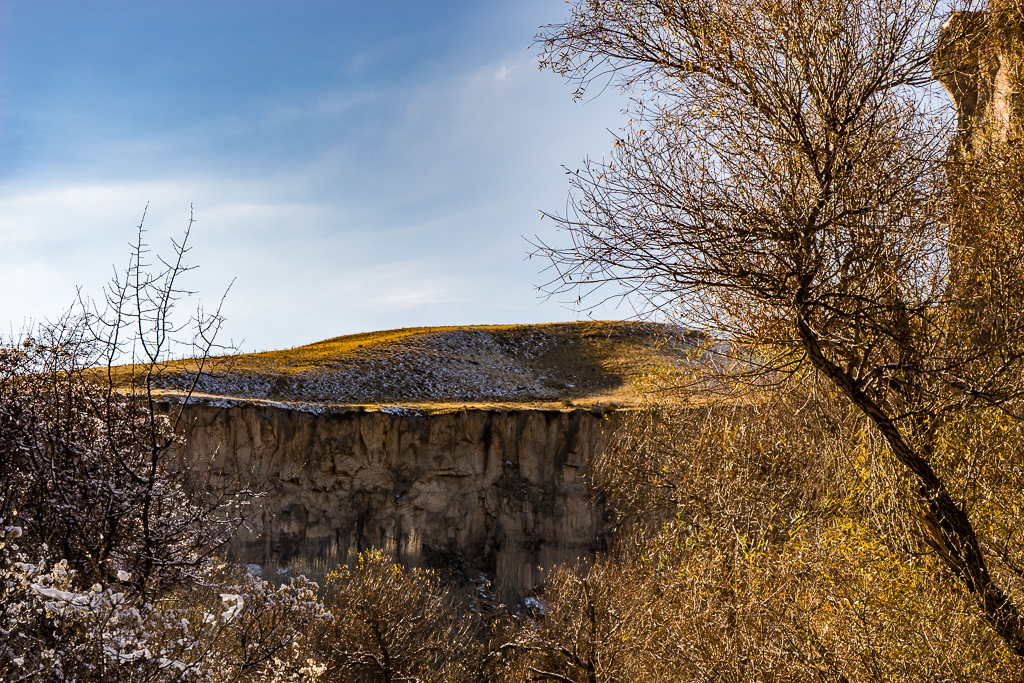 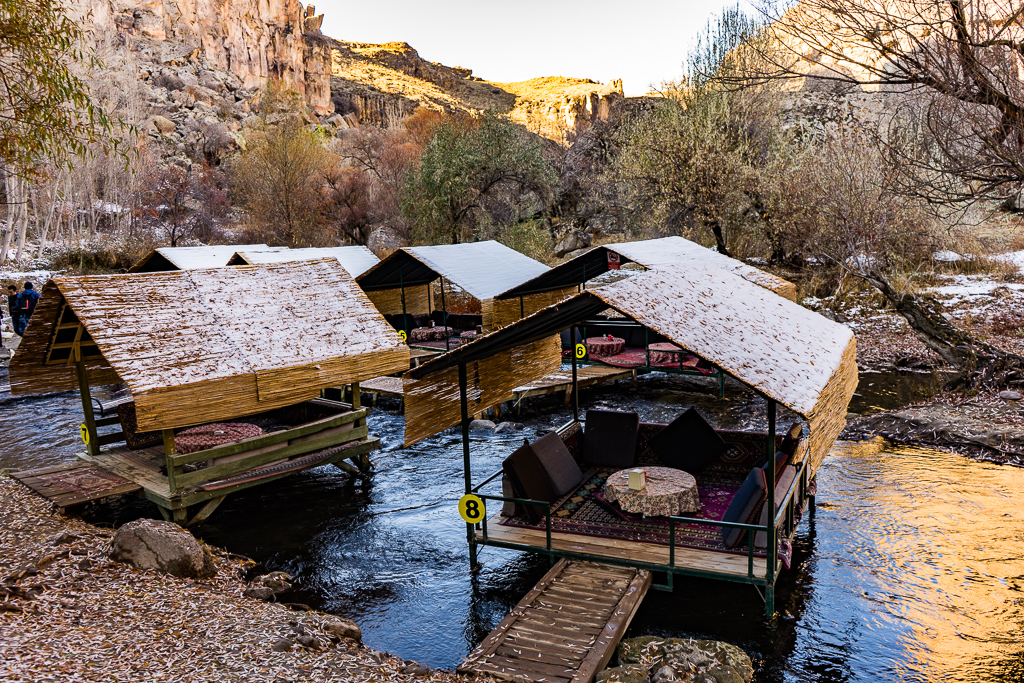 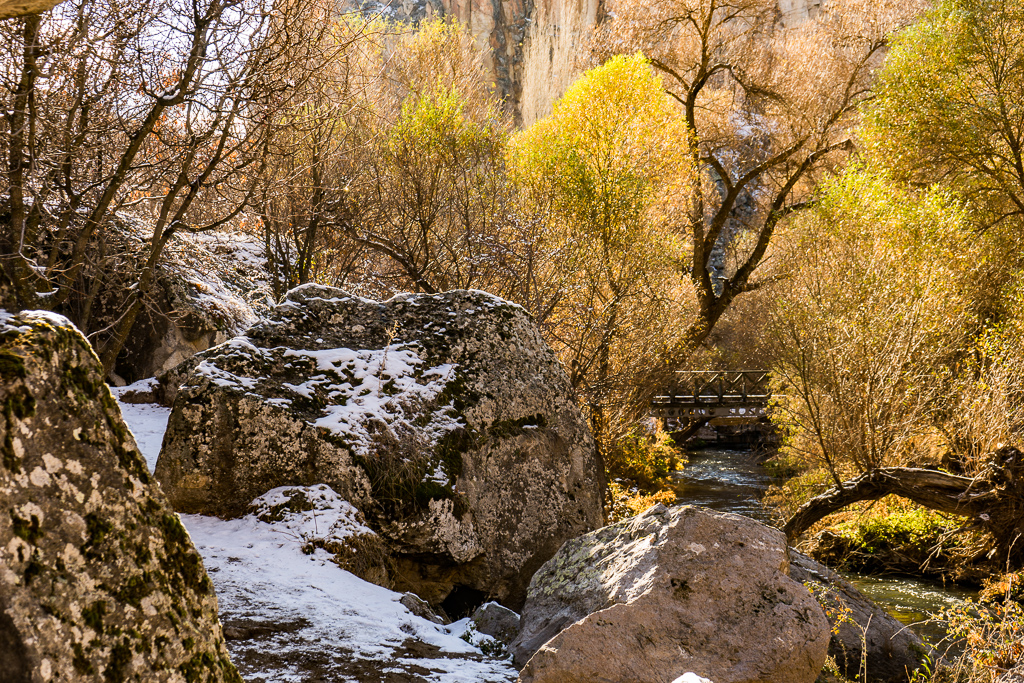 The Green Tour takes you to Derinkuyu Underground City, Ihlara Valley, and Selime Monastery. We also stopped at a jewelry factory and a shop selling traditional Turkish snacks and sweets. The price for the tour was 100 TL (which is like 25€), and it included all transportation, all the entrance fees, and lunch. Pretty good deal for a full day tour, I would say. 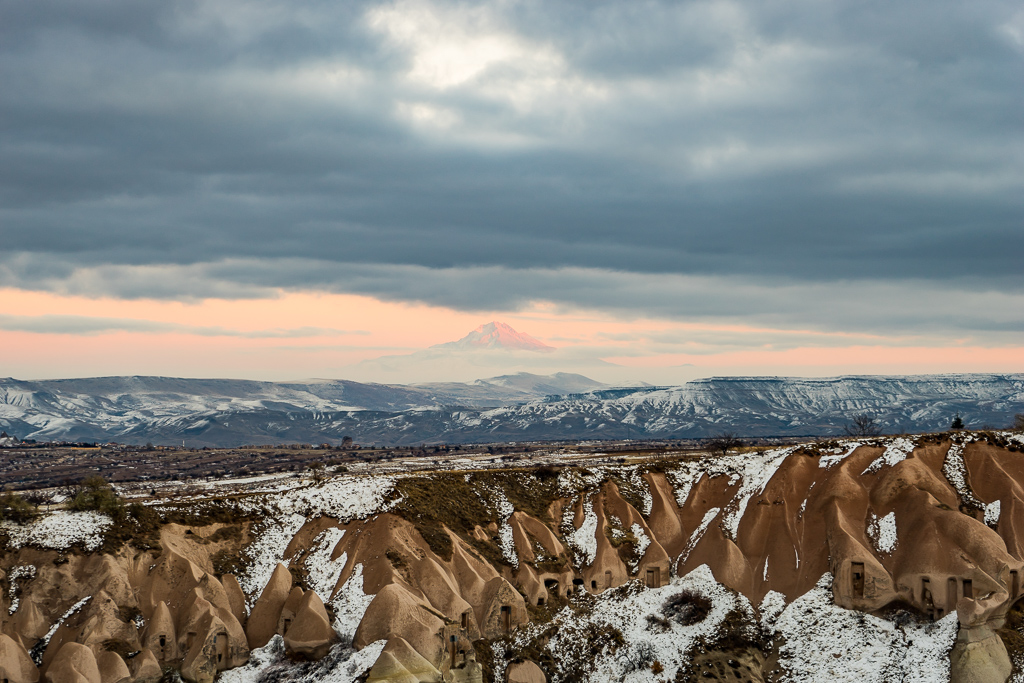 The tour was back in Göreme just in time for me to eat dinner and then head to the bus station. I had hoped to sleep on the bus because it was an overnight bus but it turned out to be impossible because of the man working on the bus. He made me change my seats four times during the night, and he didn’t speak a single word of English. Every time I was almost falling asleep, he was shaking me to wake up, grabbing my bags and making me move to another seat. I don’t know what his job even was, other than keeping me awake the whole night.

So after the bus situation and the lack of sleep the night before that (because of the early wake-up for the hot air balloon flight), I was dying when I finally arrived in Pamukkale at the crack of dawn. It was freezing cold, and everything was closed. I walked along the streets and found one guest house (Kale Hotel) which was open. I ate there and fell asleep on the table after that. I asked their prices and they also offered very cheap options if you only want to have a bed for a half day. I was considering this as I was so tired I hardly could keep my eyes open but then decided to book the first available bus back to Istanbul.

Book Your Bus to Istanbul

There are a lot of travel agencies in town who will arrange a bus and a shuttle to the bus station for you. I chose the bus leaving at 4 p.m, but if you want to do some activities like paragliding, they also have buses leaving later in the evening. You could also book a flight and avoid the second night on the bus, but at the time I was there, the flights were just too expensive. 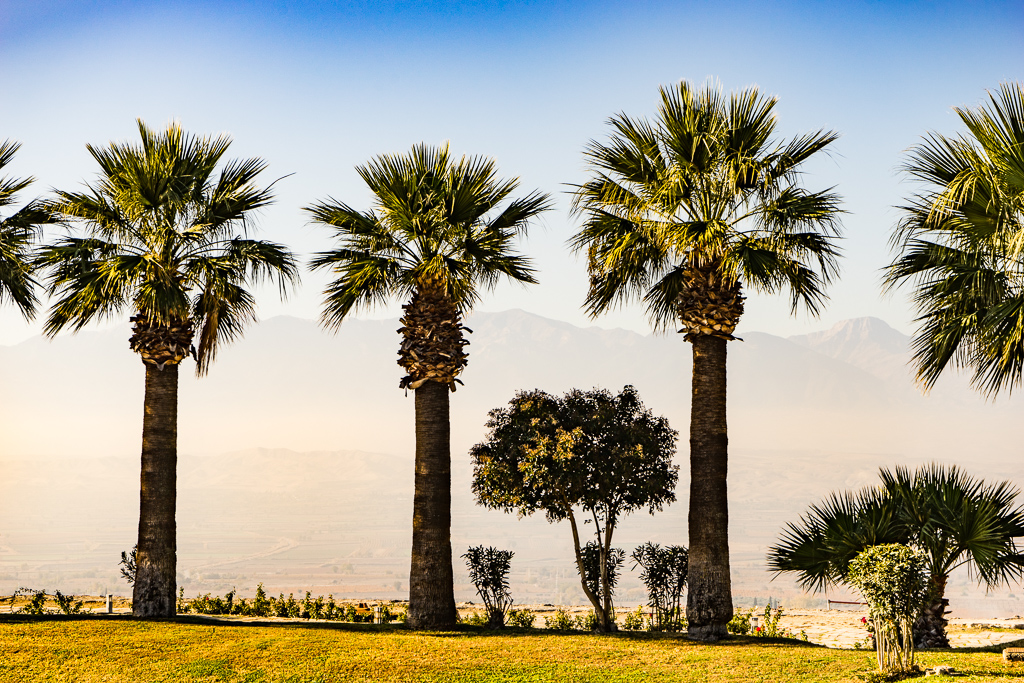 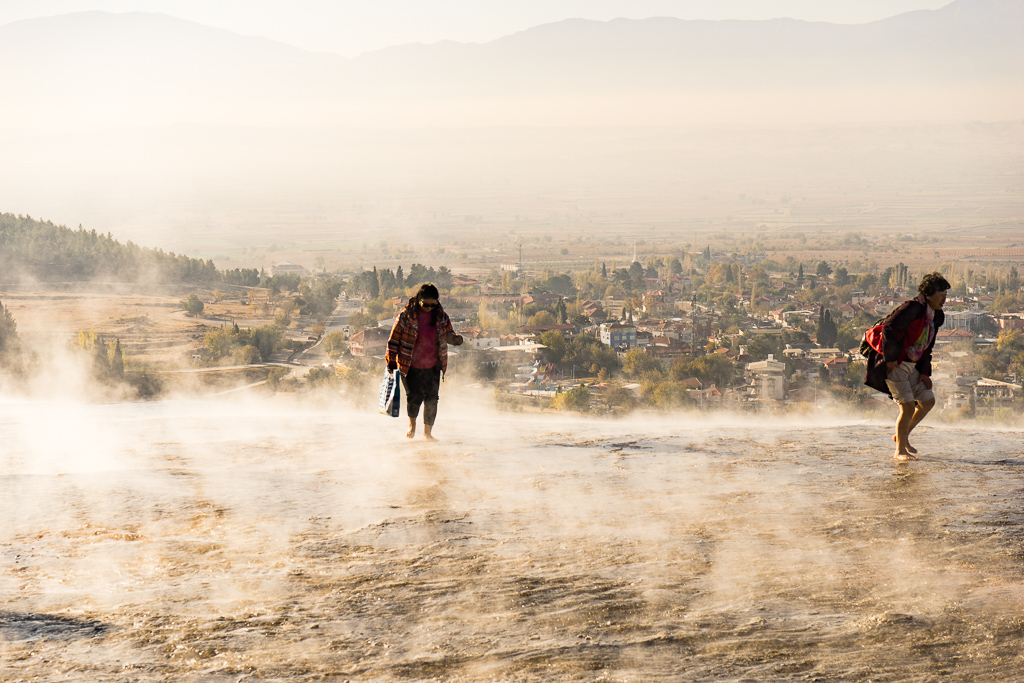 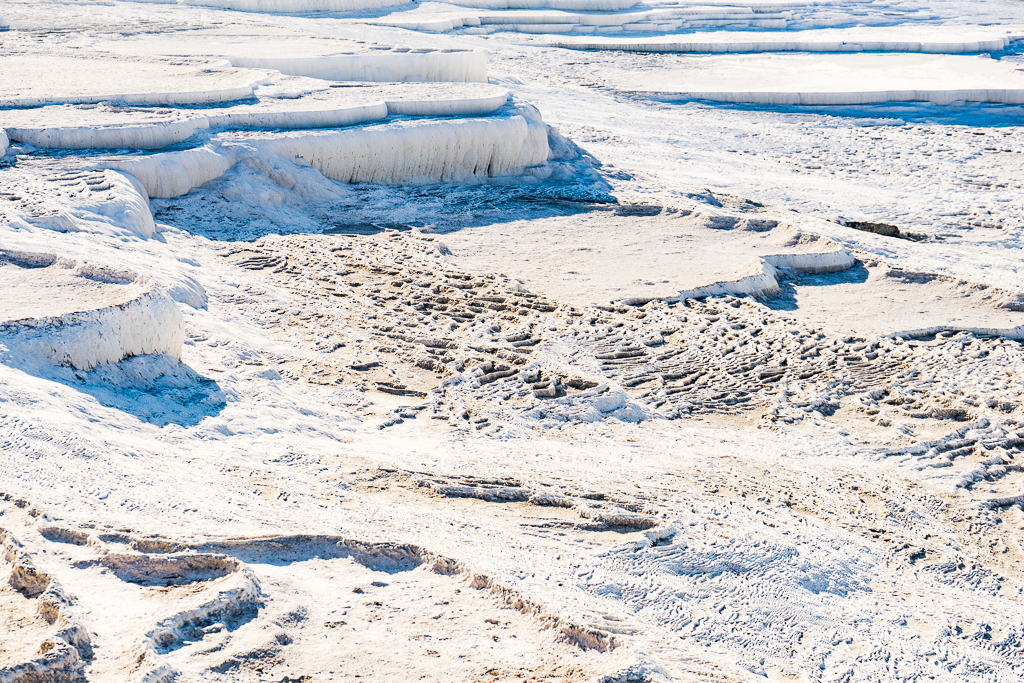 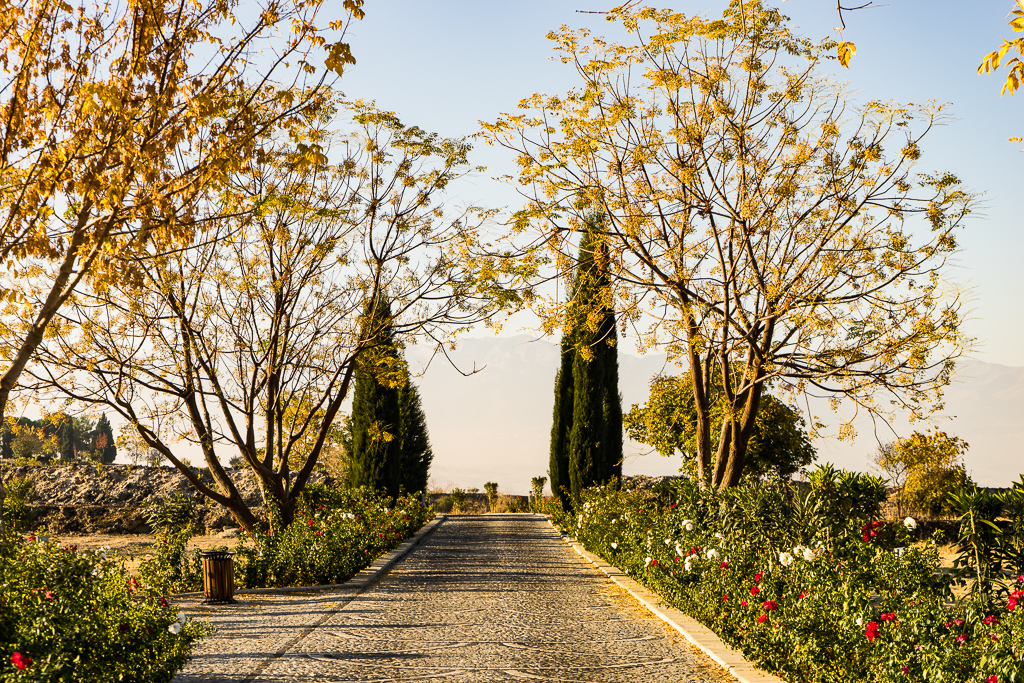 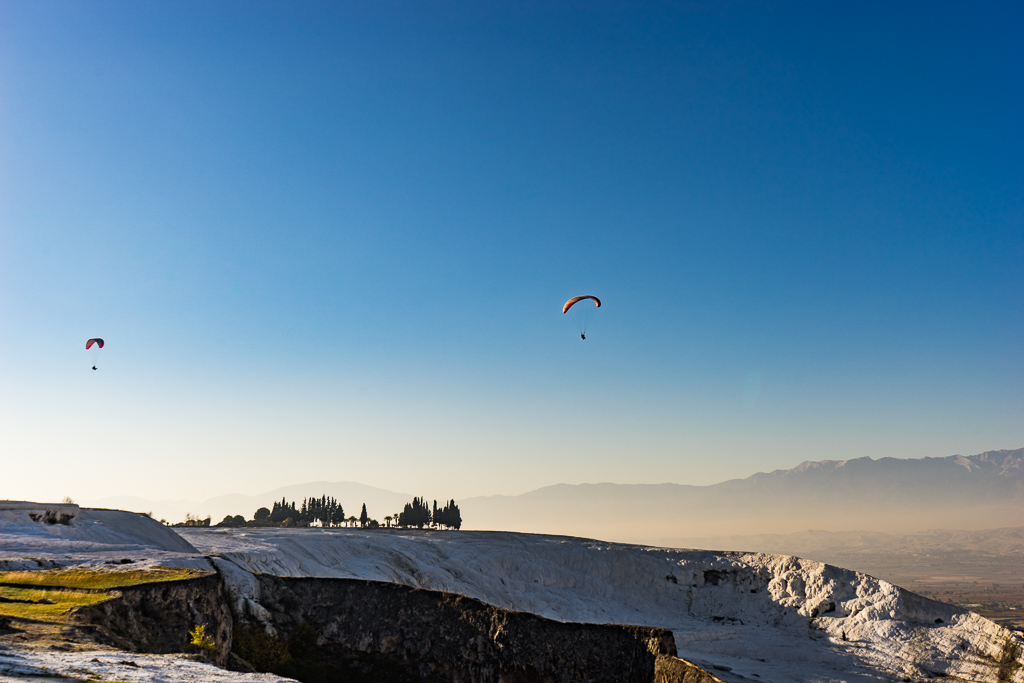 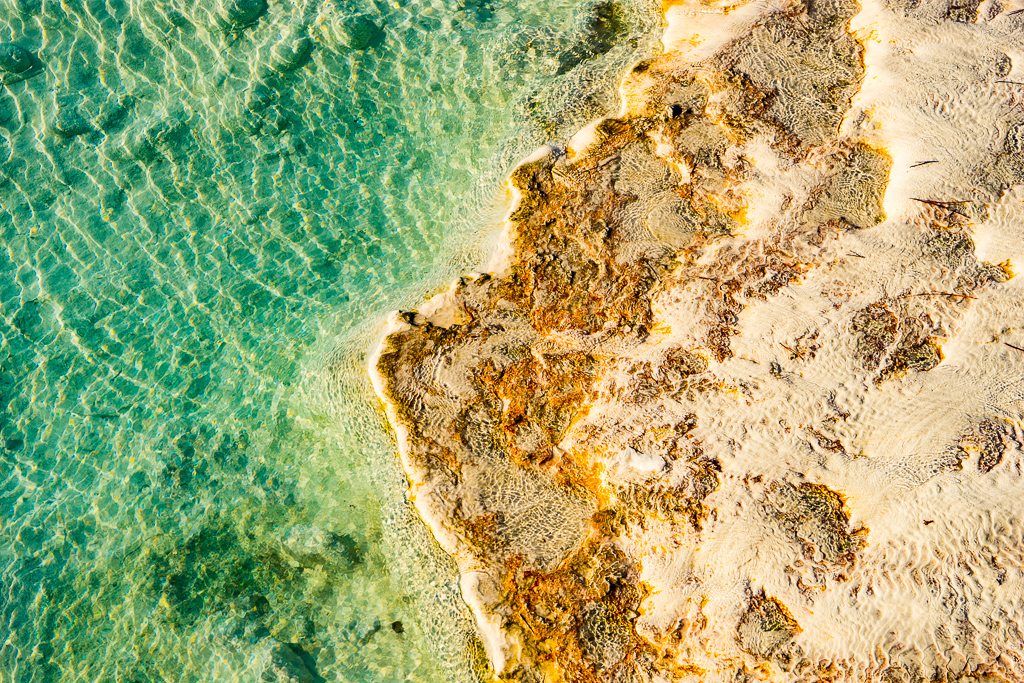 Pamukkale Hierapolis opens at 8:30 a.m, and I was the first one there waiting to get in. The best way is to take a minibus to the North Entrance which is a bit further away from the town, and then walk back. That way you don’t have to walk uphill, and I also avoided the crowds (not that there were so many people anyway when it was low season). 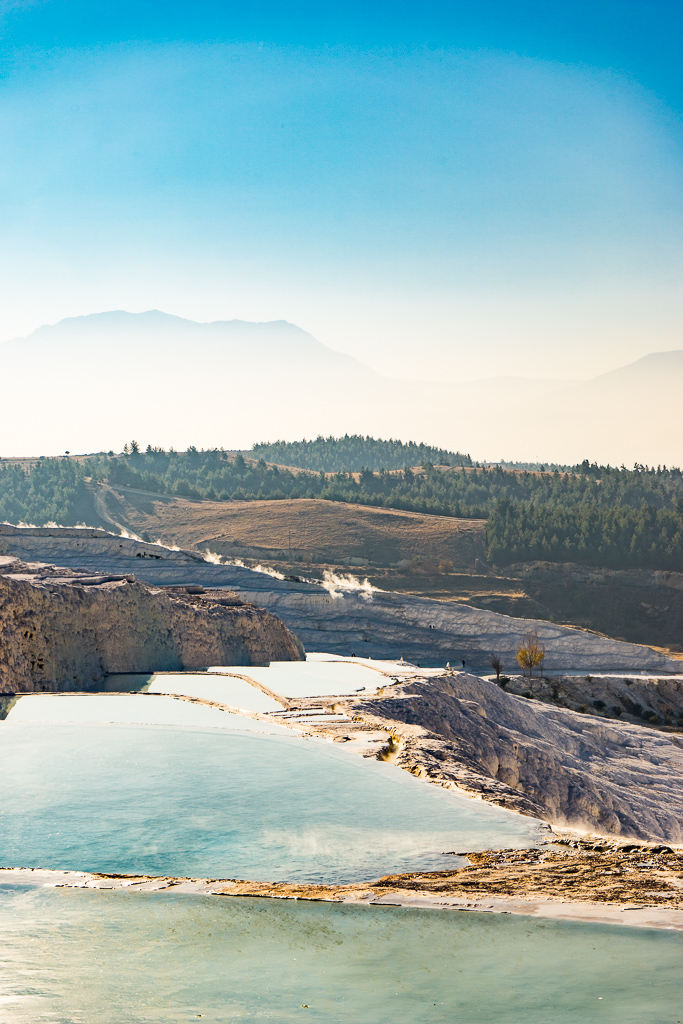 In conclusion, I would say that my schedule was very tight and because of three nights lack of sleep, I was exhausted when I finally made it to Istanbul in the wee hours of the morning. If you don’t have much time, this is the way to see the best of Cappadocia and Pamukkale just in three days, but I have to admit that this kind of traveling is not for me. I like to spend more time in places I visit but the cold weather just wasn’t for me, and I didn’t have winter shoes or anything for the snow in Cappadocia, so I definitely didn’t want to spend there more time than I had to. Maybe I’ll return to Cappadocia someday to see its beauty in the summer. The experience would be totally different!

The Best Places to Visit in East Africa

UTHANDO – A Different Way to Experience Townships in Cape Town

OMG, the balloon flight looks amazing. It’s on my list to do this in Africa, but yours looks great too.

I loved your pictures!! I am saving this for my trip to Cappadocia. Thanks for sharing!

This is such a great way to get to Istanbul and see both Cappadocia and Pamukkale. Although, I agree with you, I would definitely prefer to do it more slowly and probably in summer too (not a fan of the cold:)). It does look incredibly beautiful in winter though.

Very thorough guide and sounds awesome! Cappadocia is high on my list so this is very useful! Thanks

Gorgeous photos, Gabriela. Riding in a hot air balloon is definitely on my wish list.

The balloon ride looks amazing. What a great trip!

I read your title – Cappadocia & Pamukkale in 3 days… I had to read how you did it as the schedule is really tight! Not surprised you were exhausted, but I was really happy you got to see everything:) Cappadocia is awesome and you should definitely return in the warmer weather!

Yes, I would like to return with either a proper winter clothing or in the summer!

Really loved every sentence of your story, I am sure you know that there more things that you can add to your story, so please come back to Turkey again. We are sponsoring for many travel writers visiting Turkey, we will be happy to help you.

Hi! I would love to visit other places in Turkey as well! Loved it there 🙂