Gorilla Trekking in the Democratic Republic of Congo

There are only three countries in the world where you can see wild mountain gorillas: Uganda, Rwanda and the Democratic Republic of Congo. I had already decided to visit Virunga National in Congo to climb Mount Nyiragongo and see the world’s largest lava lake (check out my blog post A Hike to the World’s Largest Lava Lake – Mount Nyiragongo, DR Congo about this adventure!). My original plan was to go gorilla trekking in Uganda, but because I was already going to DR Congo and the permit was cheaper than in Uganda, I decided to see the gorillas in DRC. And I’m so glad I did!

Why Should You See the Gorillas in DR Congo? 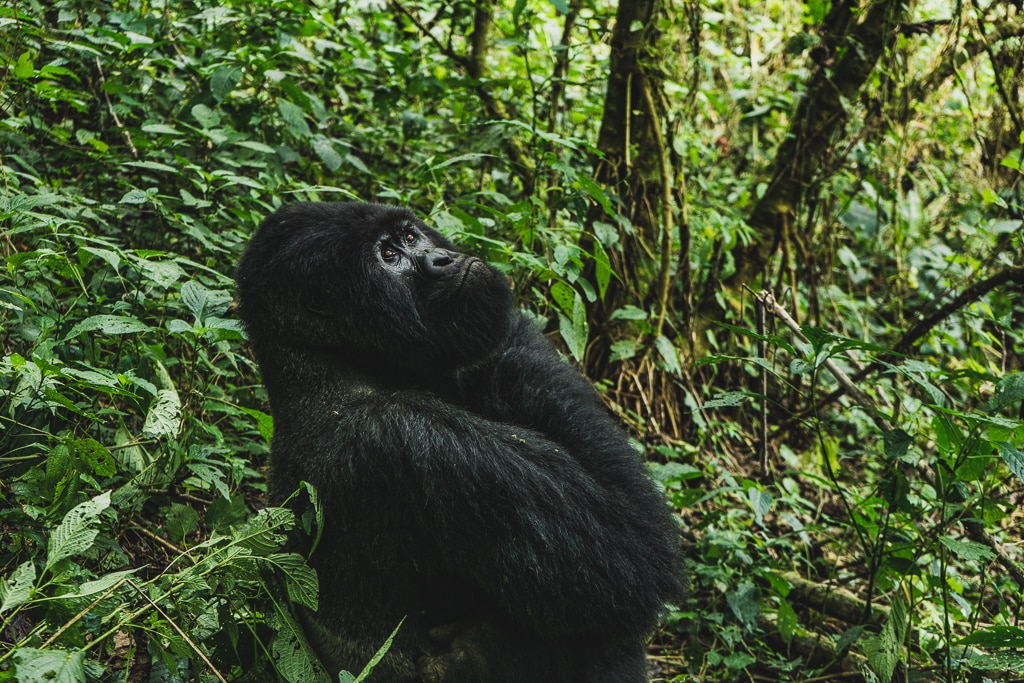 As I said, you can also go gorilla trekking in Uganda or Rwanda. But here are some of the reasons why you should do it in Congo instead.

The Permits Are Cheaper

In Uganda, the gorilla permit costs you $600, while in Rwanda they just increased their prices last year and it’s now a whopping $1,500! Congo remains the cheapest option, and the price is “only” $400.

In Congo, Your Money Makes the Most Impact

The Democratic Republic of Congo is a lot poorer and less developed country compared to Uganda and Rwanda, and they also receive fewer tourists. A proportion of the money from the permits goes towards community projects like water and agricultural projects, and this can have a significant impact on local people’s lives. Our ranger told us about all the great things achieved because of that, like getting clean water and better roads, and how locals have now realized how important tourism is. So I really hope more people would visit Virunga National Park in DR Congo!

While traveling around in the Democratic Republic of Congo can be dangerous, and it’s a country known for its violent crime and rebels, visiting Virunga National Park is not dangerous for tourists. You’re accompanied by rangers all the time, and they work hard to protect the gorillas (and tourists). While the tourists are well protected, the rangers still risk their lives for their work, and every year some rangers get killed by the rebels or poachers.

The Hike Is Easier, at Least When Compared to Uganda

I had heard many stories of people hiking eight hours in dense rainforest in Uganda just to see the gorillas, and I was prepared for this too. To my surprise, we only walked an hour in a field, and then the other rangers called us that they had found the gorillas. We then walked less than 10 minutes in a rainforest to reach the gorillas.

It’s All About the Adventure!

If you want to travel to a more unusual destination, DR Congo is definitely your choice! It’s all about the adventure there and besides gorilla trekking, you can do activities like volcano treks, chimpanzee walks, Rwenzori mountain treks and climbing.

Read my previous post to learn more about my experiences traveling to DR Congo, crossing the border, my hike to the world’s largest lava lake, recommendations for a tour company (I used Green Hills Ecotours), and some ideas on where to stay in Goma. 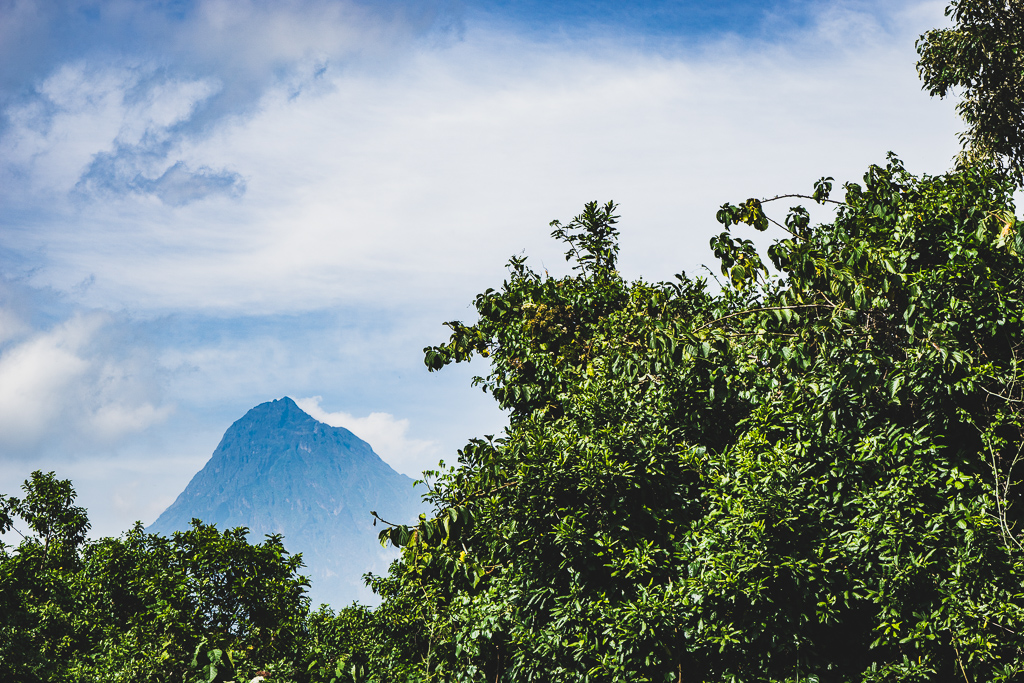 After the volcano hike, I had spent a night in Goma at Hotel Jerryson. The drive to Bukima, the starting point of all the gorilla hikes, was a lot longer compared to the previous drive to the starting point of the volcano hike. It took over an hour driving on a very bumpy road. I was still traveling with the Austrian guy who hiked Mount Nyiragongo with me. He hadn’t planned to do the gorilla trekking at all but changed his mind after the volcano hike. Luckily, Innocent from Green Hills Ecotours was able to organize everything for him very last minute. 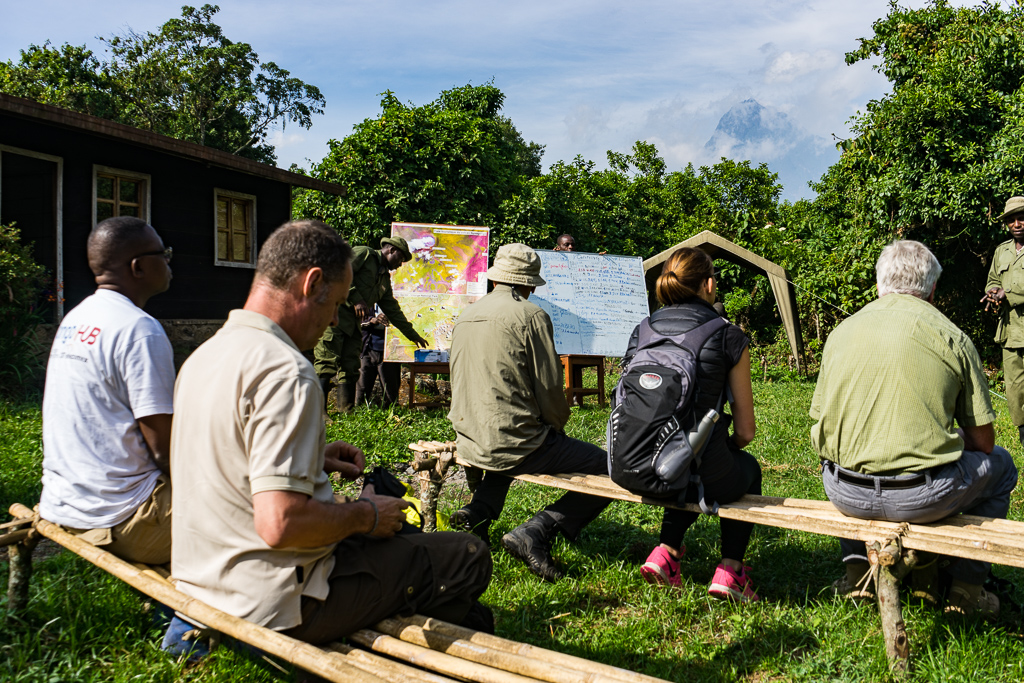 When we got to the starting points, there were lots of other people (I mean, not that many – still less than ten) joining as well which was a little surprise for me. After all, no other people were doing the volcano hike two days ago. All of us had a briefing first to learn a little bit more about the gorillas and the area, and what you can and cannot do near the gorillas. We were then divided into two groups – both visiting a different family. My group had four people (plus rangers and porters), and we were going to see the Humba family. 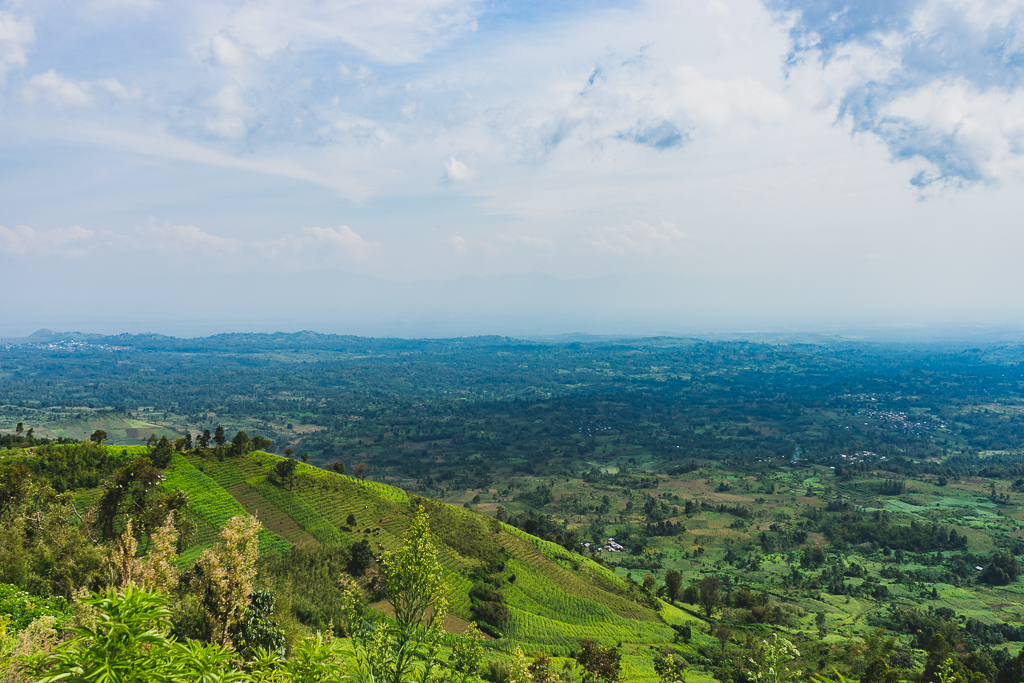 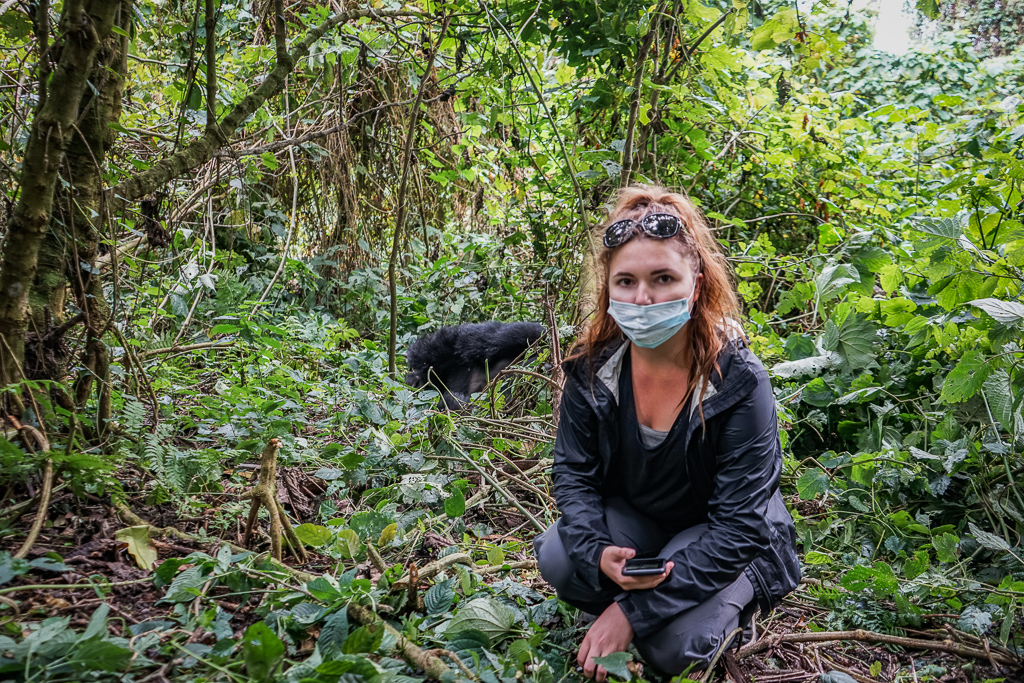 As mentioned earlier, the hike was so much easier than I had expected. We were just walking in a field for less than an hour when our ranger got a call that the gorillas have been found. We then walked up a hill and just 10 meters into the rainforest when we were told to leave our stuff there. You can only take a camera with you, and you’re given a mask you have to wear near the gorillas so that they don’t get any diseases from humans. 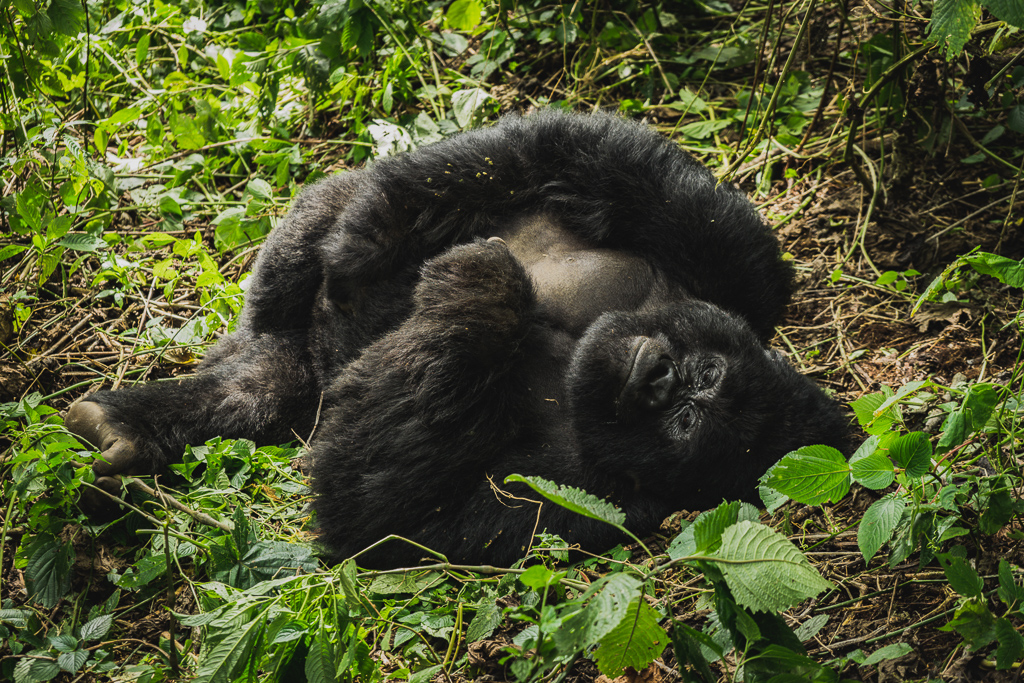 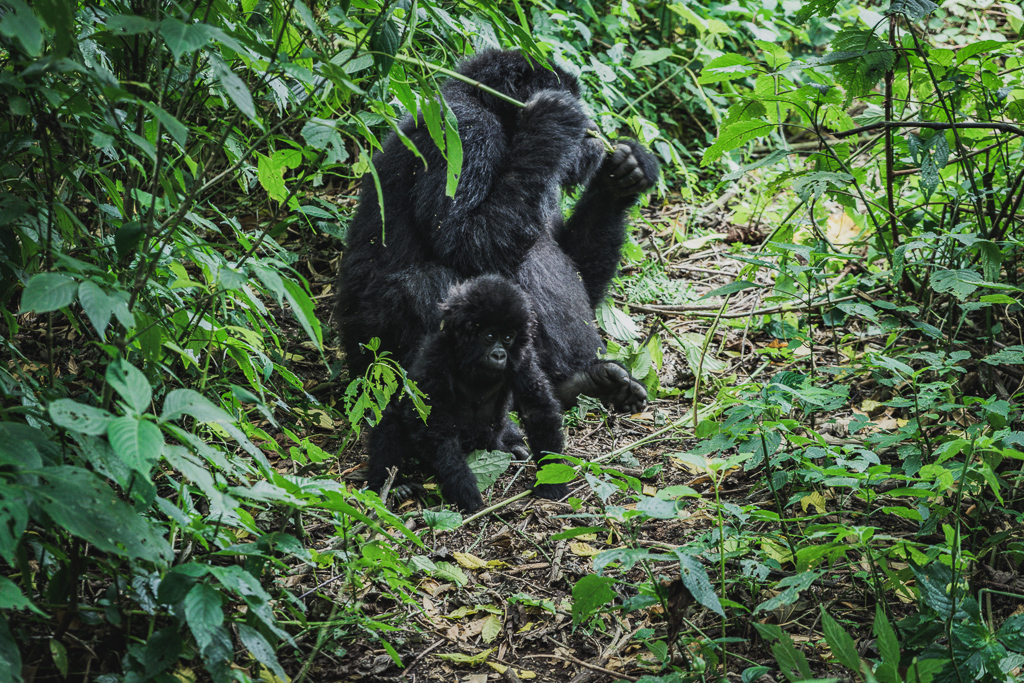 At this moment I was still confused by how easy the hike had been, and I couldn’t believe that we were near the gorillas. But after walking another 10 meters, I could see the first gorilla! It was a silverback laying on the ground, and soon after that, we could also spot a mother with her baby. 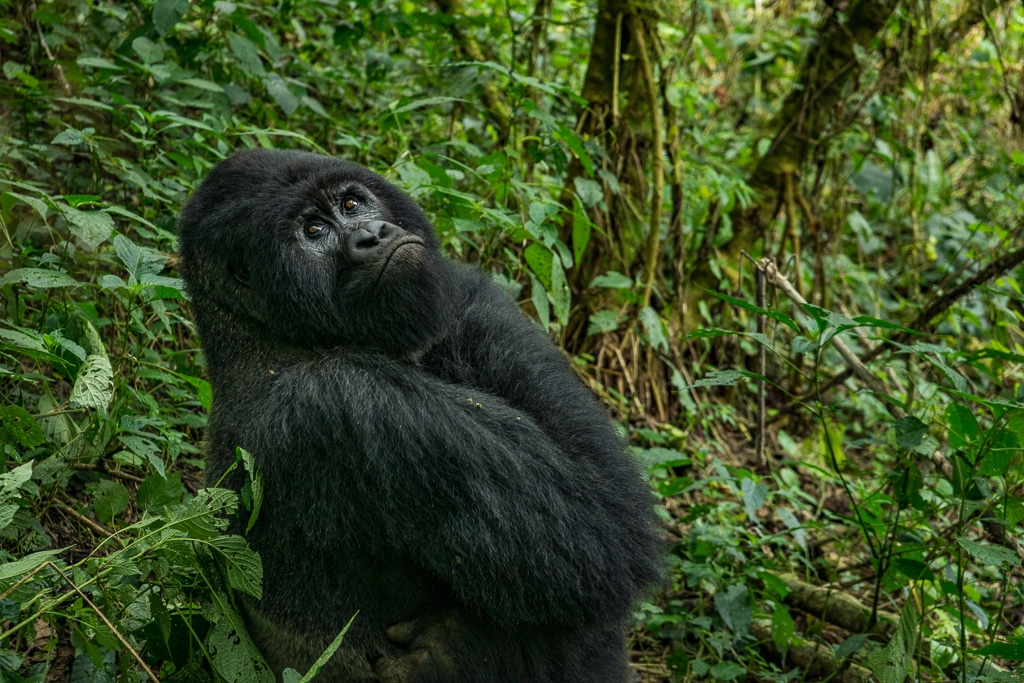 It was fascinating to watch the gorillas and also funny that they didn’t seem to care about us too much. The rangers told us that they are used to a particular group of rangers and know them, but if some random people came here, the gorillas would get aggressive. You definitely don’t want to make the gorillas angry as they are huge and very strong! We had to listen to the rangers as they told us where to go and how to behave. But as I said, the gorillas were pretty chilled and used to these people. 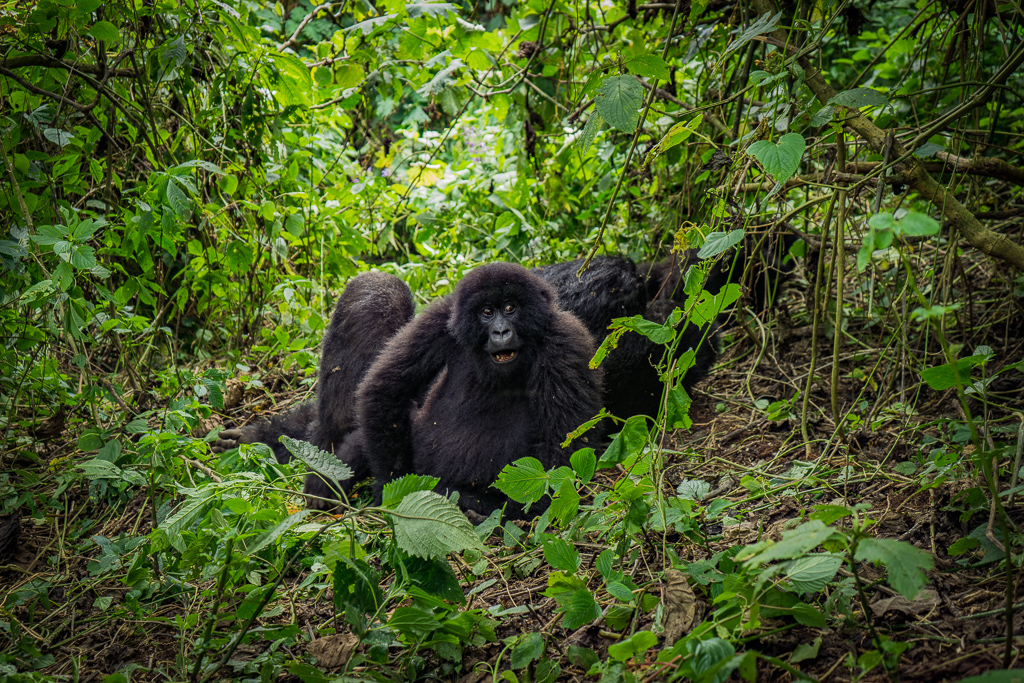 We walked deeper into the rainforest and saw the rest of the family members. In total, we were allowed to spend one hour with the gorillas before heading back. The rangers were very professional and told us a lot of interesting stories and facts about the gorillas. Overall, this was an unforgettable experience, and I felt so privileged that I got to see these endangered animals so closely in nature! 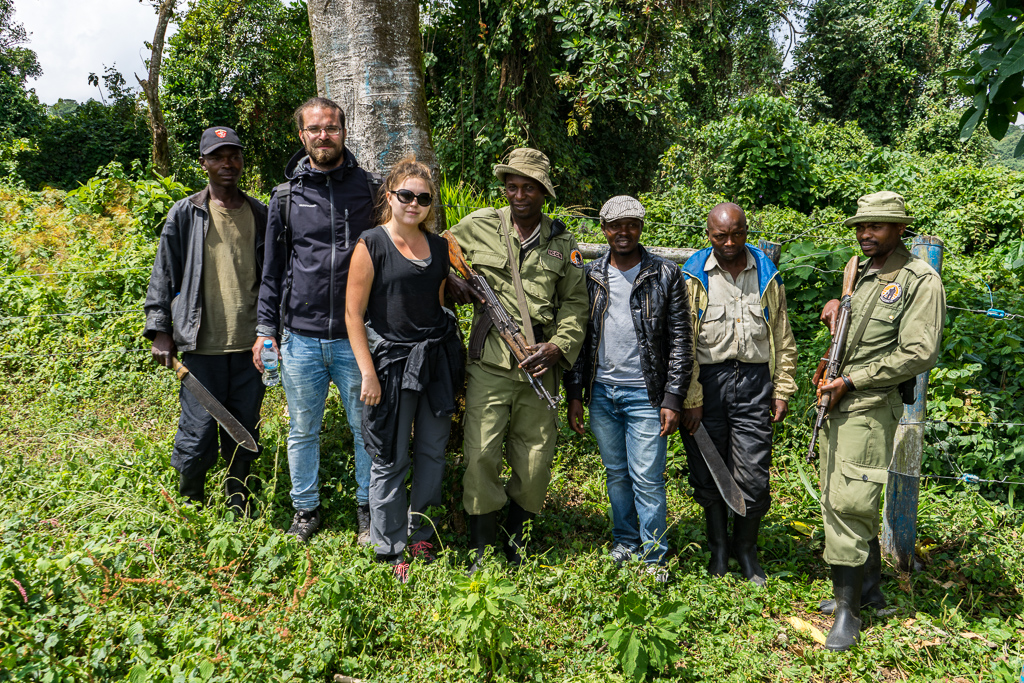 After the hike, our driver took us straight back to Goma, and I crossed the border to Rwanda. I had some difficulties crossing the border because you need to apply for your Rwandan visa online three days in advance. What I hadn’t thought, was the fact that I was crossing the border on Sunday. So while I still had applied three days earlier for the visa, weekends don’t count, and I was denied entry because my visa wasn’t ready. I was panicking that I would have to stay several days between the two countries as I couldn’t cross the border back to Congo either. Luckily, my driver called Green Hills Ecotours, and Ruth came to help me out. She sorted the situation by calling the immigration office, and they approved my visa right away.

My Travel Plans: Overland from Cape Town to...

What an experience! Some amazing photos and great tips for others… One day I hope to go with my son. Would be incredible to see these expressive creatures up close.

I hope you can go with your son! It was an incredible experience ?

Great article, I had only known about being able to do this in Uganda & Rwanda so very valuable!

Wow! This sounds like such an amazimg experience. I really hope I will be able to do that one day since monkeys are my favorite animals. I am still slightly scared though. Is it really that harmless?

Yes, DR Congo is not that dangerous if you just visit Virunga National Park and Goma. You also help the community and gorillas when you spend your money there ?

Wow I had no idea you could see gorillas anywhere other than Uganda and Rwanda. I’d love to do it! Interested to read your other posts to learn more about the safety of the country.

Yes, check out my Mount Nyiragongo post – it has some more information about my time in DR Congo.

Wow sounds like an amazing experience and lots of useful info here! I would love to do this some day 🙂

Thank you! You should do it – it’s the most incredible things I’ve ever done!

I’ve always wanted to go gorilla trekking but had never considered going on DRC. It sounds amazing though, and as long as the cheaper price doesn’t come at the gorillas’ expense – even better 🙂

Yes, it’s the opposite. Your money helps to protect the gorillas who in DR Congo, need more protection than the gorillas in Uganda or Rwanda.

Oh what an amazing experience! I have read so much about the displacement of wild gorillas due to heavy metal mining and violence in Congo, it is such a relief to read such a positive piece from you. I had not heard about trekking in this region and this is all so good. Great post and thank you for sharing.

Yes, the gorillas have been in danger in DR Congo, and they still are. The rangers work hard to protect the gorillas because there are still rebels and poachers.

This sounds totally amazing!! I wouldn’t have known that you could travel in DRC cos of the unrest but it sounds like you’re fairly well protected with the tour. Thanks for sharing!

Virunga National Park and Goma are safe to visit, other places in DR Congo might be more dangerous.

Wow Gabriela, you are so lucky to be upclose with these majestic creatures! I think I am having a Jane Goodall moment. Haha. I will definitely include Gorilla Trekking in my travel plans this year.

It was incredible to see them! I hope you’ll have a chance to go gorilla trekking too 🙂

I went to DRC in 2015- it’s not necessarily “easier” to see gorillas there than in Rwanda/Uganda because the gorillas move up and down the mountain. When I went, it was a 3 hour hike from Bukima Camp. Sometimes the gorillas come down into the camp itself. The hike was wonderful though.