As you may know, I’m traveling to every country in the world, and that requires me to visit all the small nations in Europe I’ve skipped before. So after I was done with Portugal, I took a night train from Lisbon to Madrid and continued to Lleida the next morning. Lleida is a small city in Spain near Barcelona, and it’s the closest you can get to Andorra by train. The next day, I took a bus from there to Andorra.

Andorra la Vella is a beautiful place surrounded by mountains. A lot of Spanish and French tourists come there to do some tax-free shopping. There are a lot of shopping streets where they sell everything from cosmetics to electronics. However, I wasn’t there to do shopping, and I noticed that besides that there wasn’t much to do. In the winter it’s a popular destination for skiing, but I was there in October, so the season hasn’t started yet. If you’re interested in visiting Andorra during winter, check out a post Androrra Ski Holiday by Travel Hacker Girl.

The streets of Andorra la Vella

Andorra is also not the place for budget travelers. I managed to find one hostel, and I paid 23€ for own room, so that was kind of a good deal. All the other hotels I checked were way too expensive for my budget. The hostel was called Barri Antic Hostel and Pub, so if you are looking for budget accommodation in Andorra la Vella, that’s the place. You could also try HotelsCombined to compare the prices.

My room in Barri Antic Hostel

I’ve managed to travel to Andorra but how was I going to get out of there? There was only one bus going to Toulouse, France and it cost 36€. That was way too much for such a short trip, so I decided to hitchhike out of Andorra. I was planning to travel to Nice, France, but I wasn’t so sure if I was going to make it in one day.

I started hitchhiking around 9 am on Sunday morning. I was hoping that there would be a lot of French tourists driving back home. I soon found out that there were none. There was almost no traffic. Hitchhiking in Andorra, it’s quite easy as you don’t need a map. There’s only one main road and you just have to pick the right side depending are you going to France or Spain. Andorrans were surprisingly helpful and I got three different rides before I finally made it to the border of France. 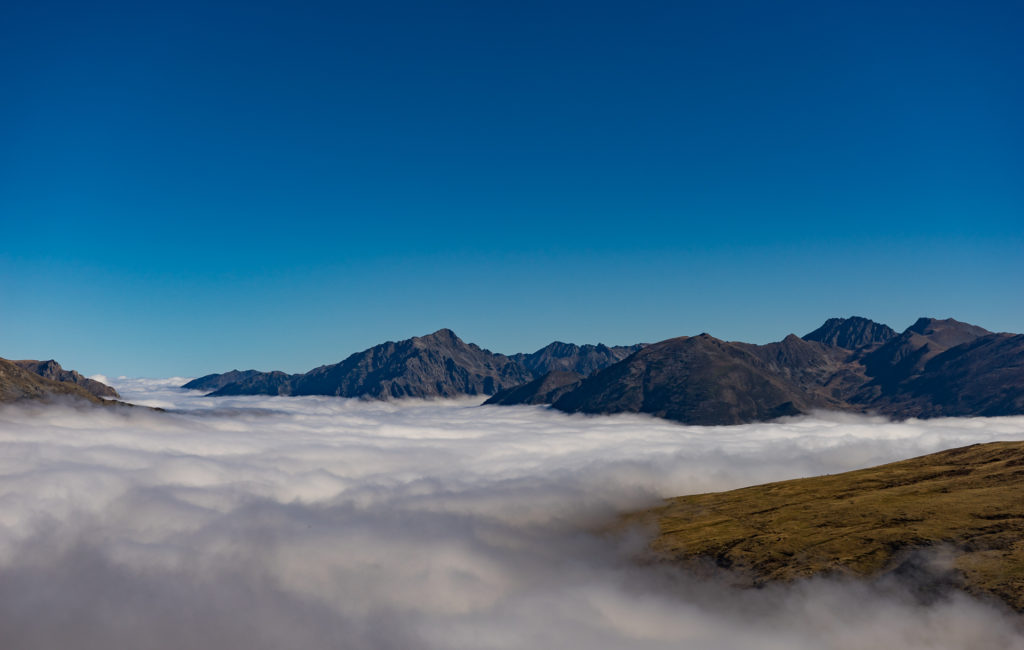 The best view for hitchhiking 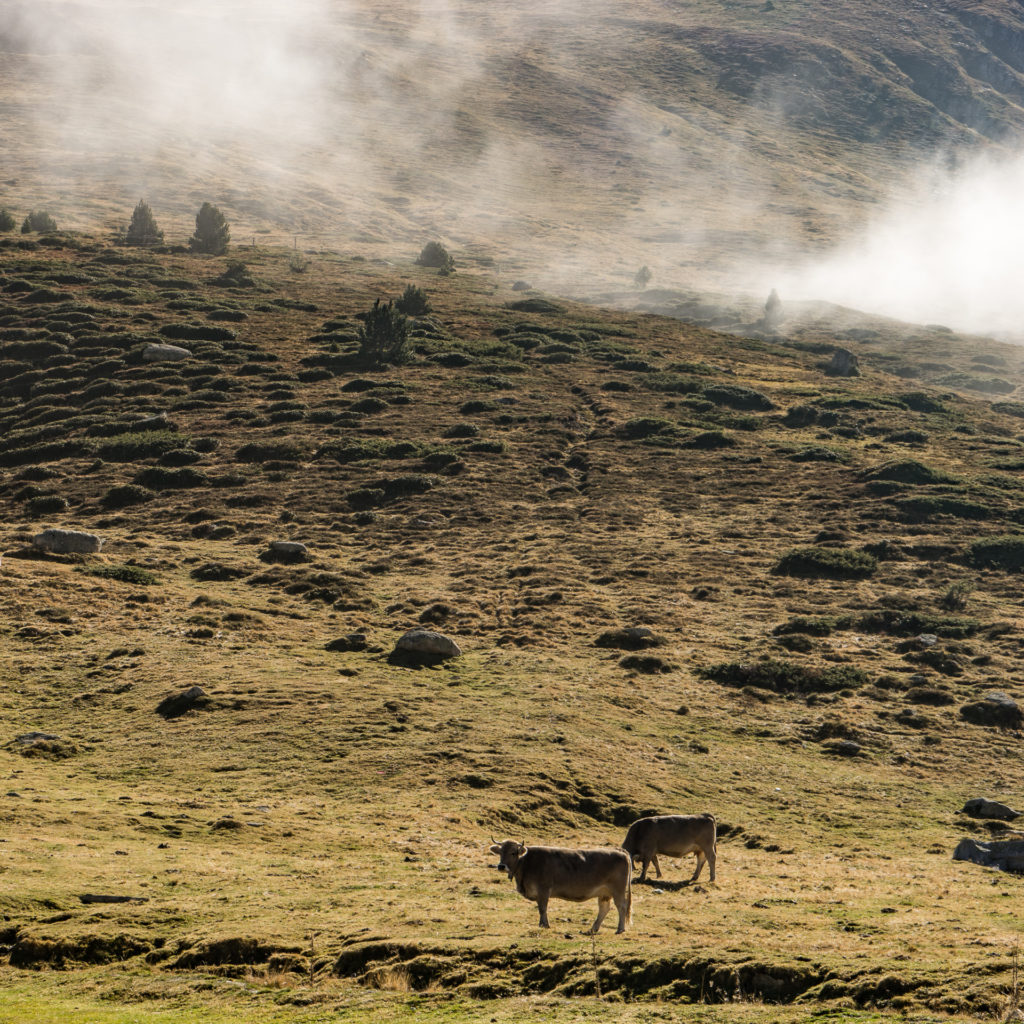 Hanging out with cows while waiting for a ride

That’s where the problems started. I found it very hard to get a ride as I don’t speak any French. I had a couple of phrases saved on my phone, but my pronunciation was so terrible that no one understood me. I had already walked a lot because the last ride didn’t actually take me to the border but a few kilometers away. I walked to the very end of the border village, and I tried to catch a ride from there.

However, there was already an older French man with his hands full of plastic bags, trying to get a ride. He wasn’t too happy about my presence, so I decided that it’s better to keep on walking. That wasn’t a good decision at all. I should have looked at the map before I started walking. Little did I know that I would have to walk over 3 km to the next possible stopping spot. I also had to walk down a dangerous mountain road where cars were driving fast, and the visibility was zero. 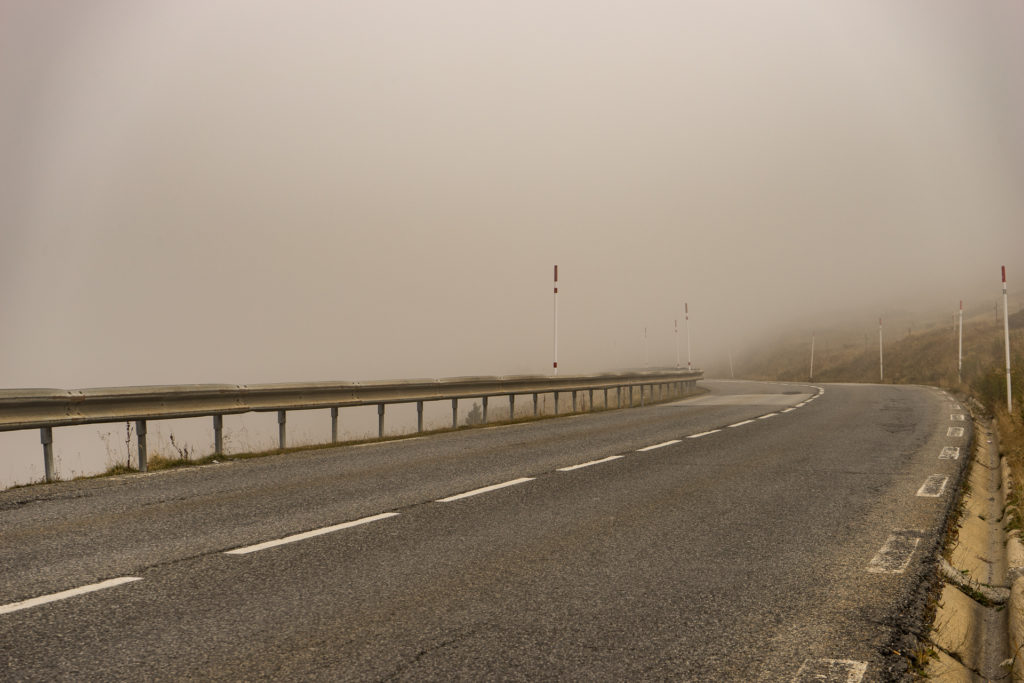 Not a happy place to be…

Finally, I made it to the spot, and I didn’t have to wait for long to get a ride. A French couple picked me up and somehow even with the language barrier I understood that they were going to a small village near Toulouse. I decided to go there and catch a train from there to Toulouse.

When we arrived, and I got off the car, the first thing I saw was the older French man from the border. I couldn’t believe my eyes. How is it possible that from all the places he would end up here? He was also going to take the train to Toulouse.

I was in Toulouse just in time to change for the next train to Nice. I couldn’t believe that I was going to make it. I was going to be in Nice just before midnight. Arriving in Nice at night in a low season wasn’t, unfortunately, the best timing. Everything was closed and I found it impossible to find a hostel. After walking around for an hour, I was ready to join the homeless people and sleep on the street. I checked one more place and there it was! A hostel which was still open! I got in a dorm and I was the only one staying there.

Have you ever hitchhiked and how did it go? Leave a comment below!

Things to Do in Benidorm, Spain

I’ve never hitchhiked before! Your adventures sound amazing though, and I love how fearless you are!

You should try it! It’s always a good adventure! 🙂

It’s easier to hitchhike as a woman. Take advantage of that. Traveling by hitchhiking is one of my principal ways of getting around but often I give up as in some parts of the world people are too fearful of hitchhikers. Female friends of mine who have hitched rides in those same places tell me they are picked up in minutes.

Hi Gabriela! Glad you got to check Andorra off your list – it’s a place I need to double back to one day! Hitchhiking always leads to great stories… even if it doesn’t always go 100% easily 🙂

Yes, Andorra was a beautiful place. Definitely worth checking out!

I have never hitchhiked before! Cudos for being so adventurous and please be safe!

Thanks, always trying to be safe! 🙂

Make sure to hitchhike in Georgia, Armenia and the Republic of Arstakh. The people there are very open to it. I’ve gotten rides of up to five hours over in that region and had my hitchhiking hosts even go out of their way to show me churches and scenic points. Also nearby I’ve heard Iran is unusually good for hitchhiking (can’t do it there myself because I’m American) as well as Iraqi Kurdistan (didn’t think to try while I was there though I will say Kurdish hospitality (and love for America(ns)) is second to none).

And I argue that there isn’t much to do in Andorra. Andorra is famous for its hot springs and has some fantastic hiking. In October I would think the trails are not yet snowed over.