Backpacking in Jordan – Amman & Surroundings on a Budget

A backpacker’s guide to Jordan. In this part, I explain how to get into Jordan, what to do in Amman, what day trips to take from Amman, where to stay and how much to pay for transportation, food, and accommodation. In the second part I talk about Petra and Wadi Rum, and how to get a free day in Petra (I’m not kidding, you can visit Petra for free). Let’s get started with the first part! 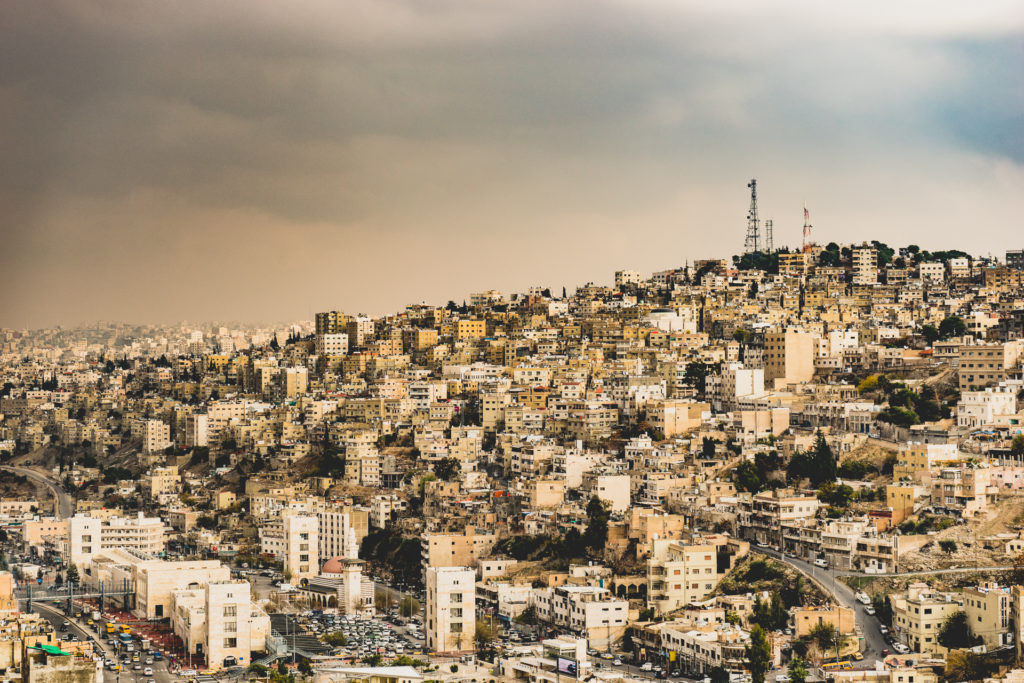 Most people travel to Jordan after Israel, and that was what I was doing as well. Most people can also cross the border overland without any worries, but that wasn’t an option for me. If you cross the border from Israel to Jordan, they are most likely to stamp your passport on the Jordanian side. And if you travel to certain countries after that, they’ll know that you’ve been to Israel because you have the Jordanian stamp from the border. And then you’ll be denied entry. Because I was planning to visit many Muslim countries after Jordan, I had to fly. I heard that on certain border crossings you could ask to get your Jordanian visa on a slip of paper, but then again I wasn’t sure if it would cause problems later. If they still stamped my passport when I’m leaving the country, it would look suspicious that I only have an exit stamp.

I searched for the flights, and the direct flight from Tel Aviv to Amman was almost 300€, and there was only one company flying the route. I searched more and found out that you could fly from Tel Aviv to Cyprus for as little as 30€. Cyprus was a new country for me, so of course, I booked the flight. I stayed a few days in Cyprus before flying to Amman. The second flight was less than 150€, so I can say that I saved a lot of money. Another option is to fly to Greece and fly from there Amman, that’s also a cheaper option than the direct flight.

From Amman Queen Alia International Airport, you can take a bus to the city center at a price of 2,65 dinars. You then have to take a taxi to your hotel, and that will probably cost 2-3 dinars.

Where to Stay in Amman

The best area to stay in Amman is the old town, and that’s where most of the cheap hotels/hostels are located. Here are some of the hotels I either stayed in or met people who were staying in:

Jordan River Hotel. I stayed here when I first got to Amman just because they had a good deal for a private room. They also have dorms, but I don’t recommend them in the winter because they are freezing cold. It wasn’t the best place I’ve stayed in but a good budget option. Check out the photos and decide yourself! A good thing about this hostel, though, was the man working there who organized a cheap tour (more about this later).

Nobel Hostel. In the same building as Jordan River Hotel, just one floor below. I had a friend staying here, so I also saw how the rooms looked like. Pretty similar to Jordan River Hotel, might be worth checking out because they also have good deals on HotelsCombined.

Cliff Hotel. I had another friend staying here. This one is a little bit closer to the restaurants and shops. Also offers dorms and private rooms for low prices.

If you want to use Booking.com, I also have a discount for you. When you book through my link, you’ll get 15€ free travel credit. You can use this anywhere; it doesn’t need to be in Jordan. 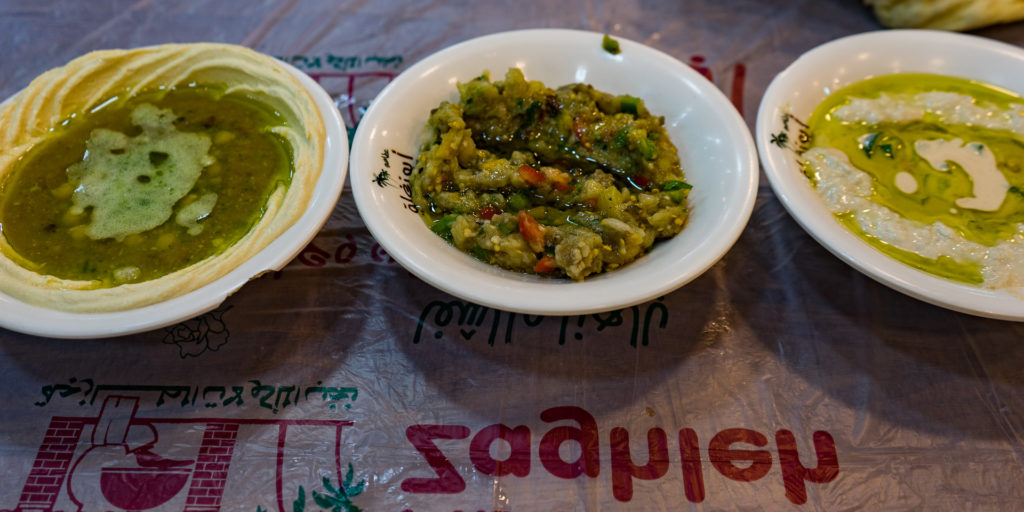 The problem with eating in Jordan is that most restaurants will charge you more because you are foreign. There is one restaurant in the old town I can recommend because they have a proper menu with the prices and they are same for both locals and tourists. This restaurant is called Abu Zagleh, and they offer traditional Middle Eastern food.

I’ve included a map below to explain better. Google maps is not the best because it doesn’t show the small alleys. But if you walk around the block from Abu Zagleh, not the first but the second alley is the one where you can find a cheap bakery. In the third alley, you can find a shop selling falafel wraps (this was basically my stable food in Jordan). The price for one wrap is less than 0,50 dinar, so it’s a bargain. Just opposite to the falafel shop is a fresh pomegranate juice shop. The juice costs 1 dinar for a small and 2 dinars for a large one. There are other juice shops along the King Hussein Street and King Faysal Square as well where they have a bigger selection. 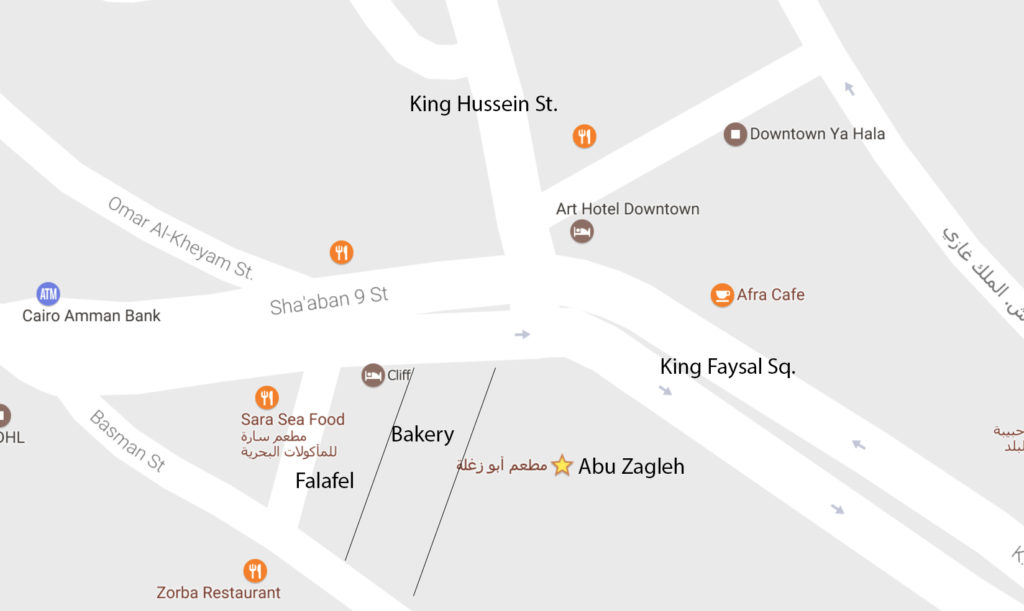 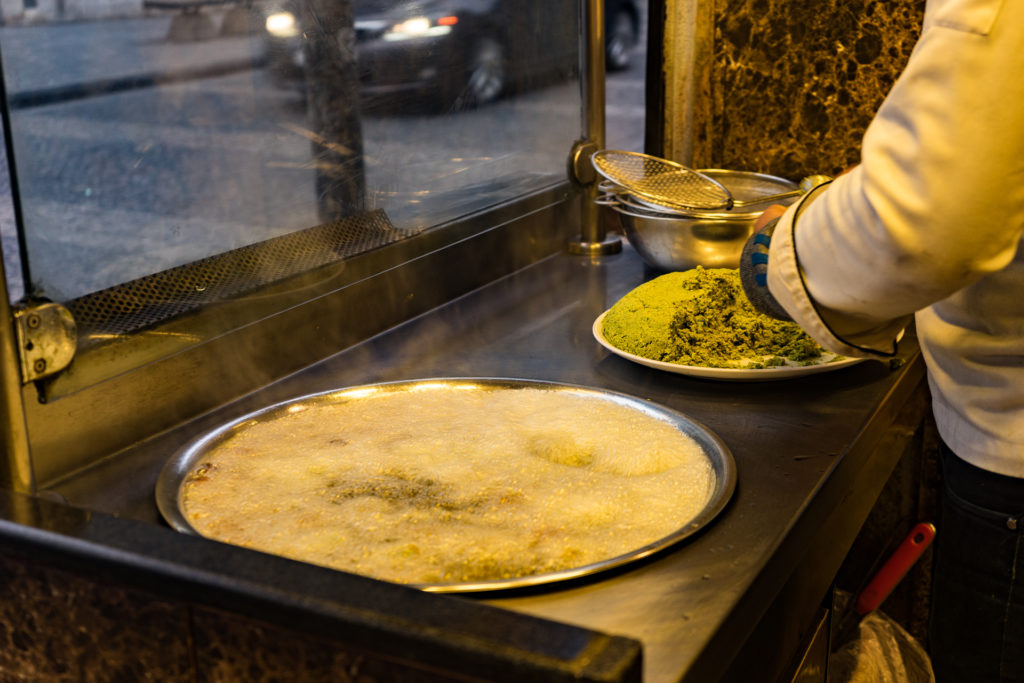 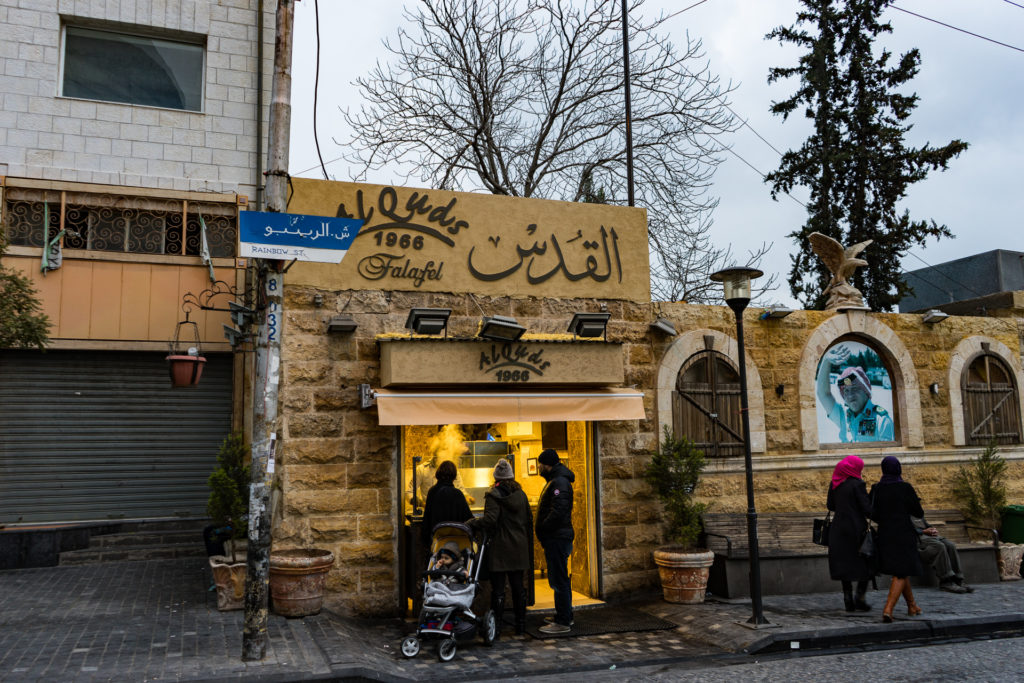 Another nice place for cheap food is Al Quds Falafel on the Rainbow street where they sell falafel sandwiches. These are a bit more expensive than the wraps but still affordable at a price of 0,75 dinars. And they are delicious!

This is a must. At first, I wasn’t sure if it was worth to buy this, but then I read that the visa cost is also included which definitely makes it worth it. When you buy this, you have to decide if you want a one, two or three-day pass to Petra. I recommend a two-day pass, and you’ll actually get the third day for free if you want (I’ll explain this in the second part). Other than the visa and Petra there are many sights included in the price. Buy the pass before you travel to Jordan so that you get the visa for free. From the day you use the pass for the first time (the visa doesn’t count) it’s valid for two weeks, but they actually never scanned my pass until Petra. You can buy the Jordan pass here.

Things to Do in Amman 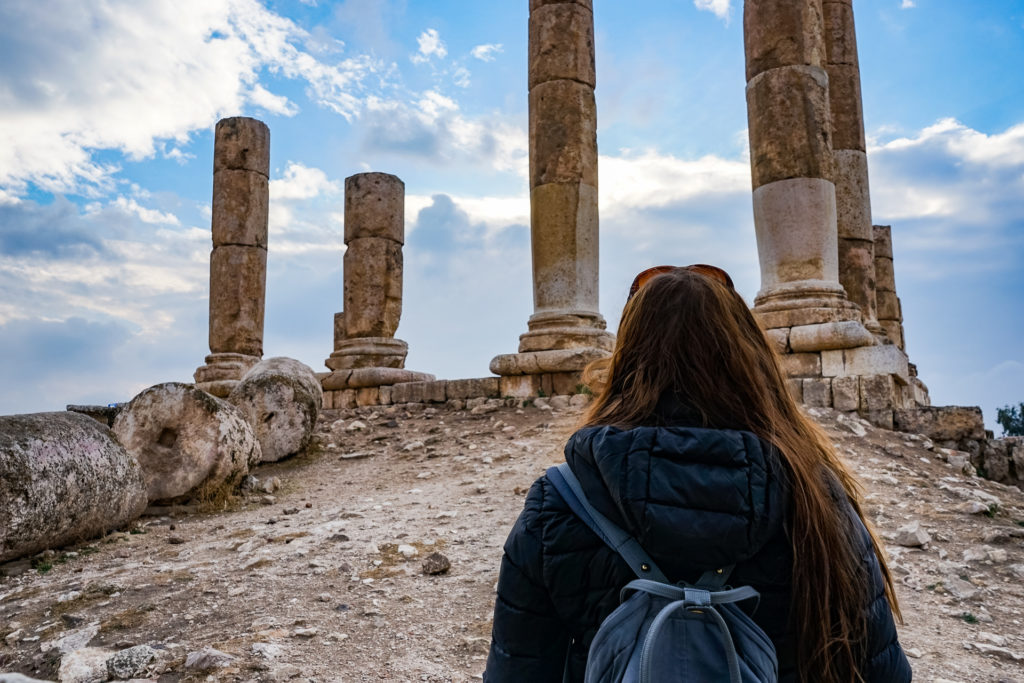 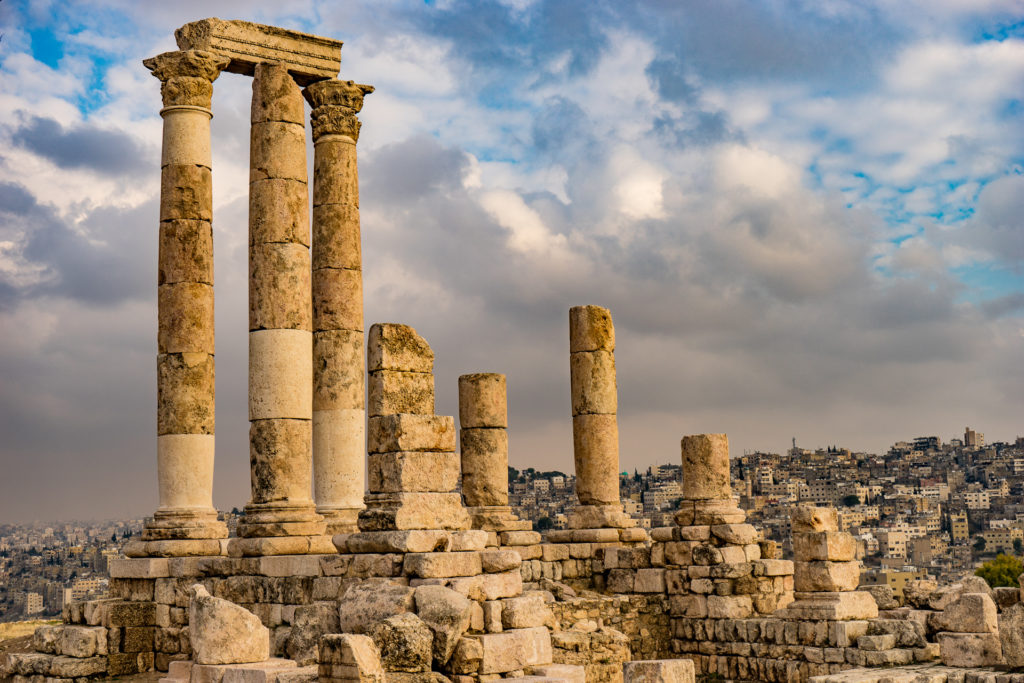 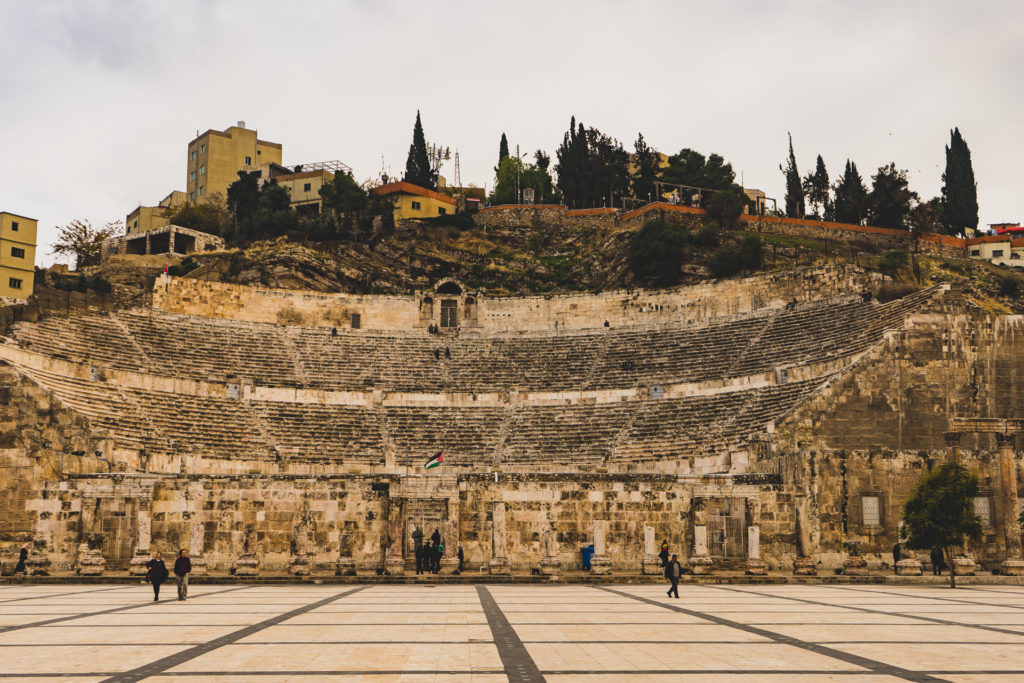 So now when you have the Jordan pass you can visit Citadel and the Roman amphitheater for free. These are the main attractions in Amman and definitely worth checking out. From Citadel you can get a beautiful view of the city. 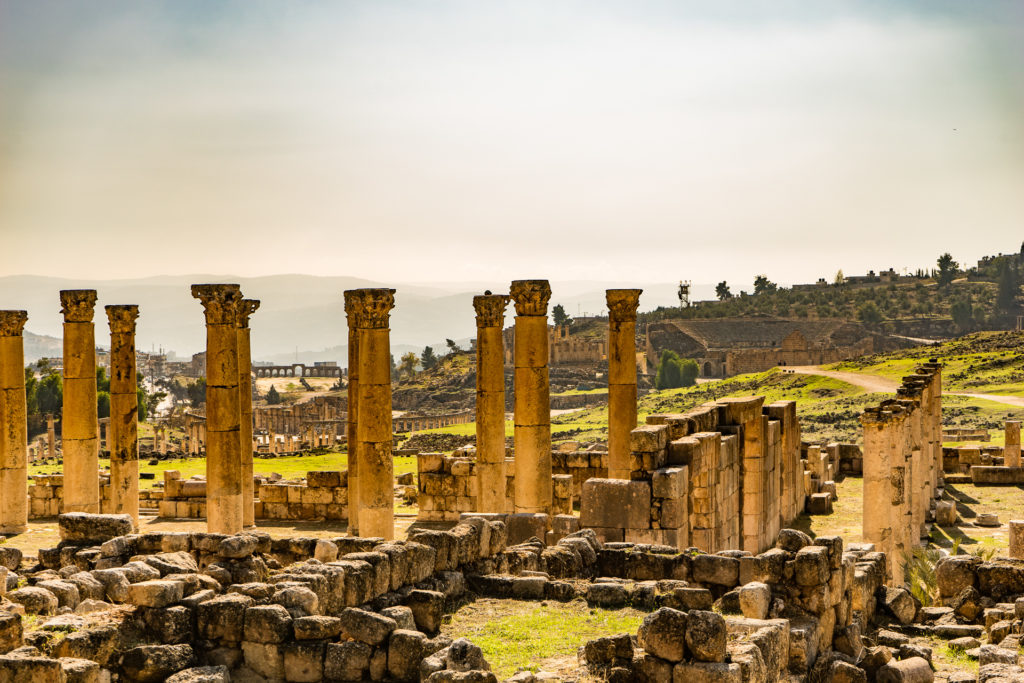 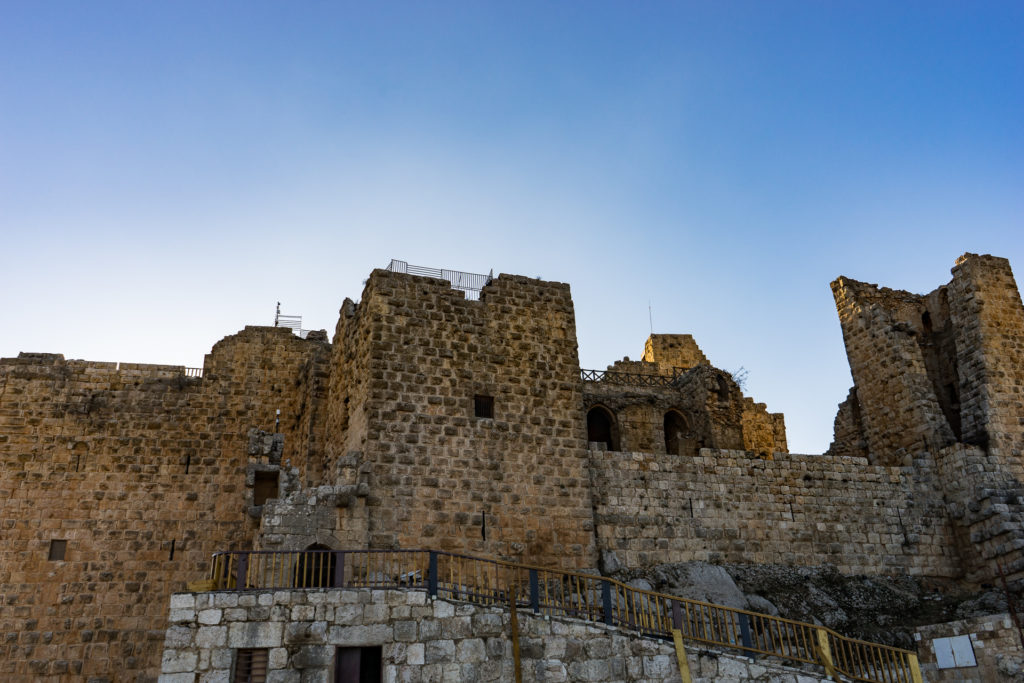 You can easily make a day trip to Jerash and Ajloun Castle. From the city, you first have to take a taxi to the North Bus Station (Tabarbour). This should cost 2 dinars, and the bus to Jerash costs 1-2 dinars. Ask the driver to drop you off where the ruins are because the actual city of Jerash is far away from the site. After Jerash, you can negotiate a taxi to take you to Ajloun Castle and back. I was traveling with two other girls, and we paid 15 dinars (so 5 dinars each) for the driver to take us there, wait for us in the car and then take us back to Jerash from where we then took a bus back to Amman. 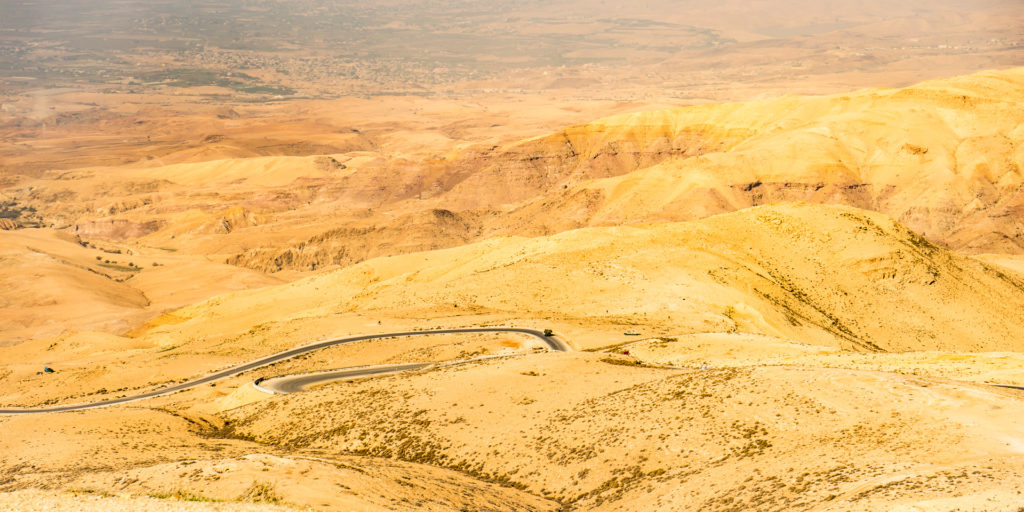 The View from Mount Nebo 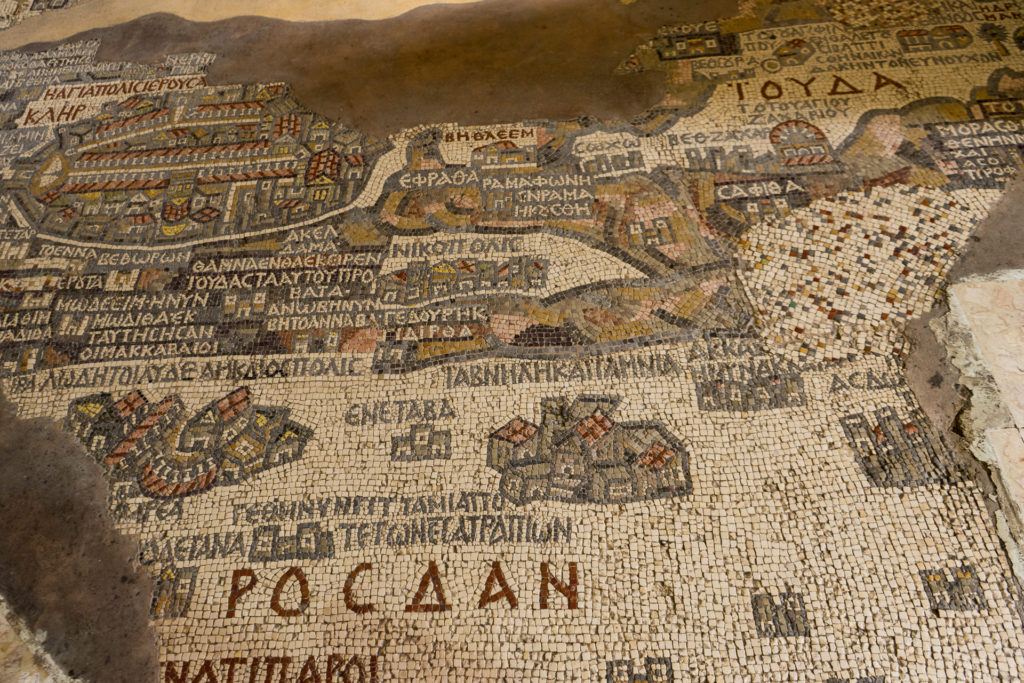 The Famous Mosaics in Madaba 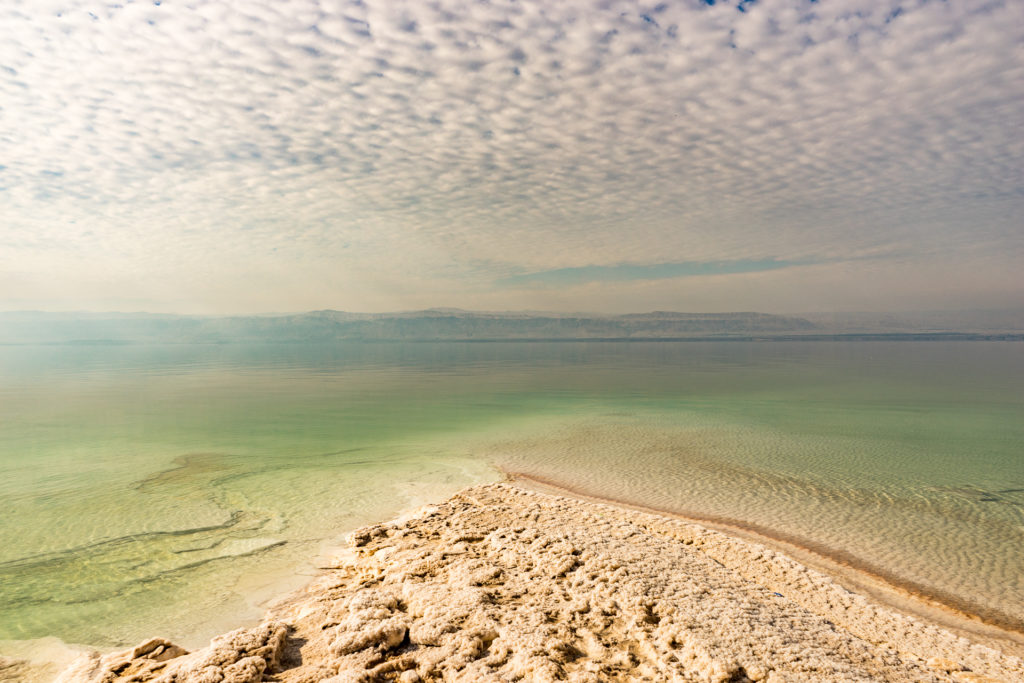 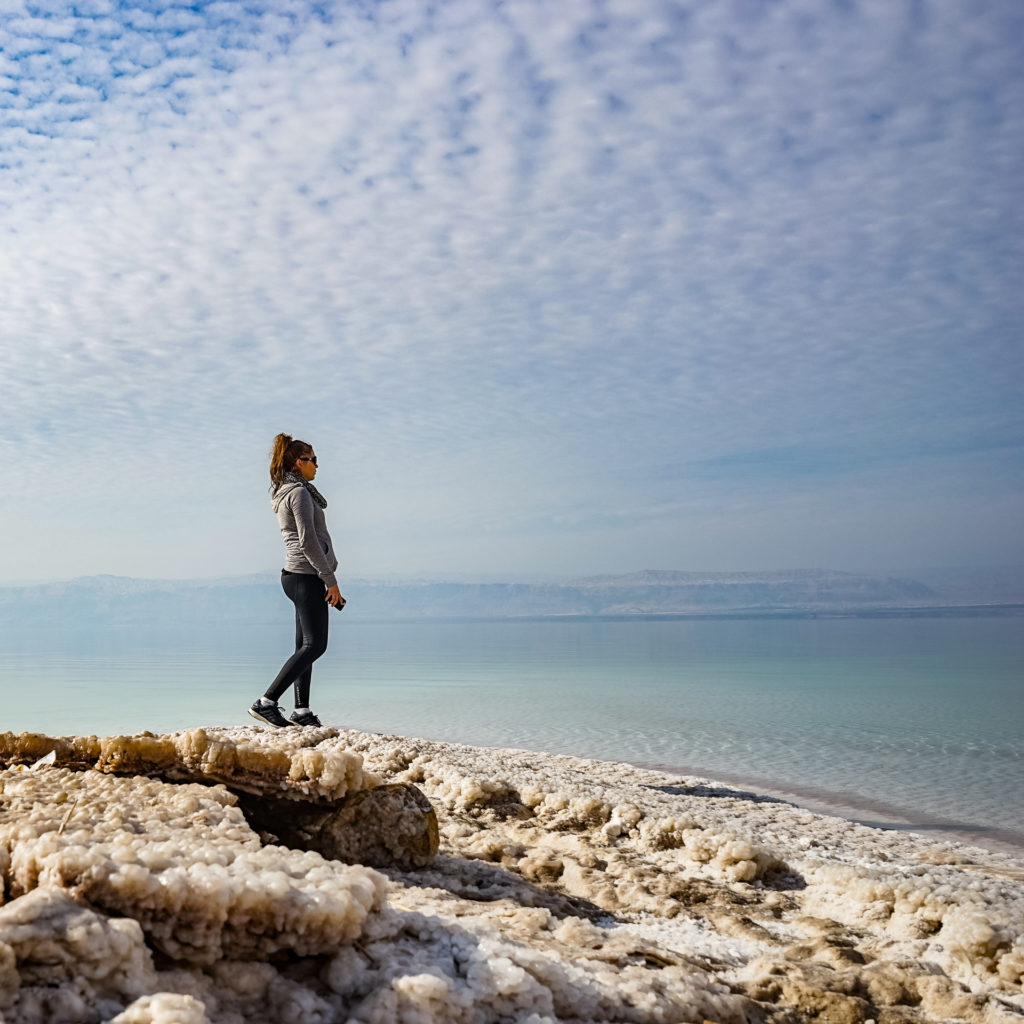 As I mentioned earlier, my hotel (Jordan River) arranged a tour for its guests. The man working there drove me and two other guests to the Dead Sea, Madaba and Mount Nebo. We paid 15 dinars each, and I think it was a reasonable price for a full-day tour to all of these sights. If you only want to visit the Dead Sea, I heard that you could get a taxi there and back to the city for 10 dinars. You have to haggle down the price, though, because most of the drivers want to rip you off. 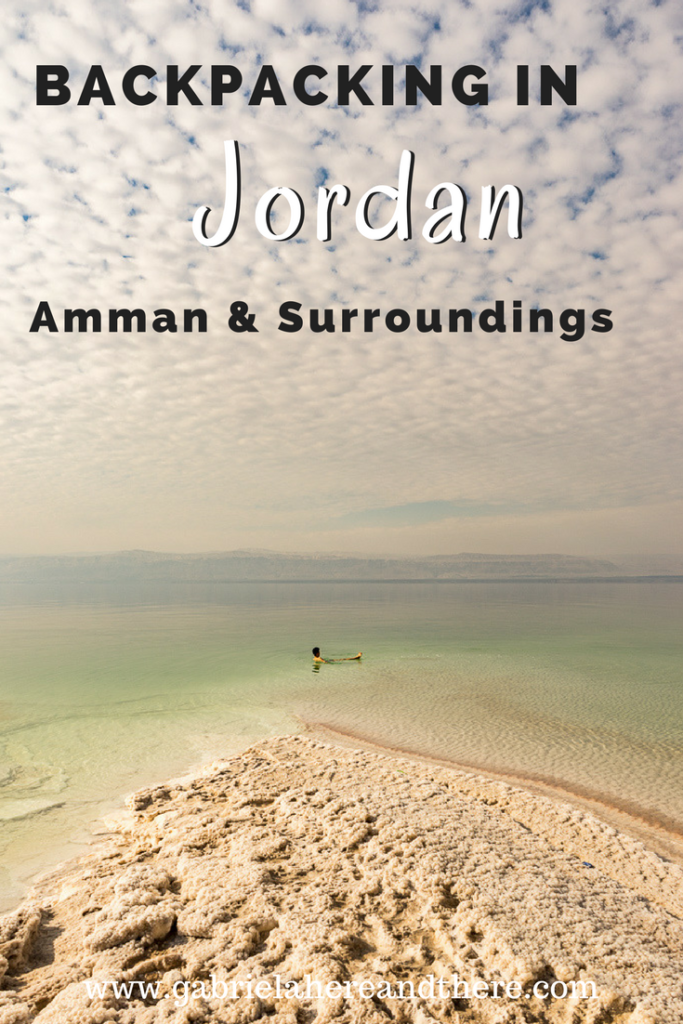 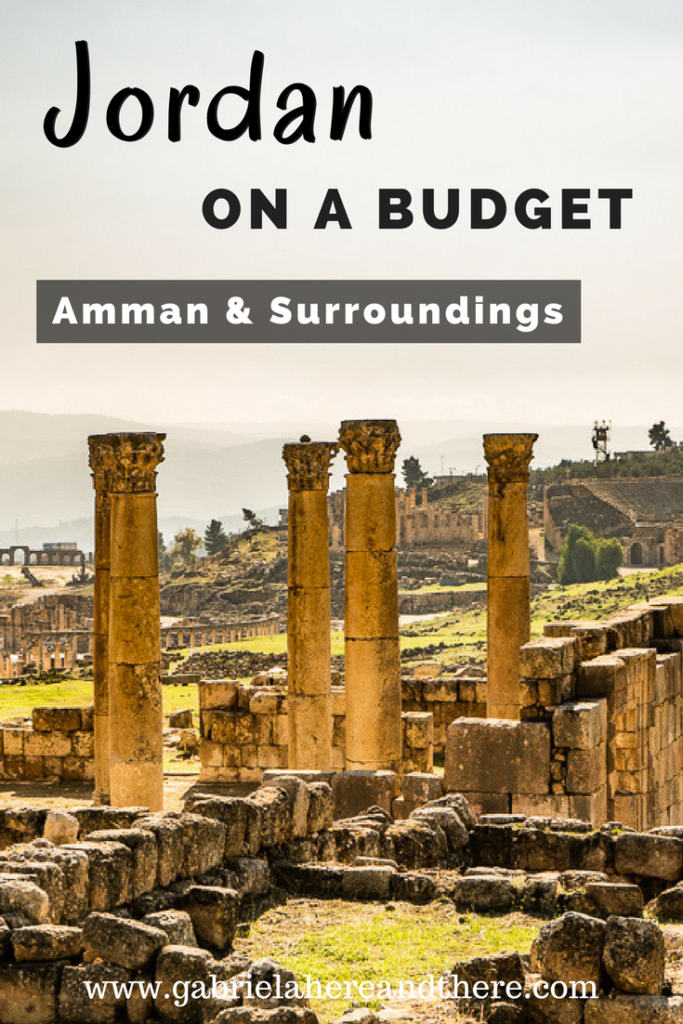 Backpacking in Jordan – Petra & Wadi Rum on a Budget

Hi Gabbie,
Very concise guide! I love especially the details on where find good+cheap food and pro+cons on the hotels.
Just one little addition: you don’t have to get a stamp crossing from Israel to Jordan via Jordan Valley in the North. You can ask to get your Jordanian visa on a slip of paper so that there is no trace of having been in Israel in your passport 🙂

Thanks for adding! But what do they do at the airport when you are leaving? Do you still get an exit stamp? Then it would look suspicious that you only had an exit stamp and not entry stamp. It just sounded so confusing that I didn’t want to take any risks, so just I flew in.