From Libreville to Lopé and Back – Travel Stories from Gabon

Gabon has a lot to offer: a spectacular array of wildlife, dense rainforests, open savannahs, white-sand beaches, rushing rivers, and beautiful green landscapes. It’s an unexplored part of Africa, and being in Central Africa, it’s not your average safari tourism destination. 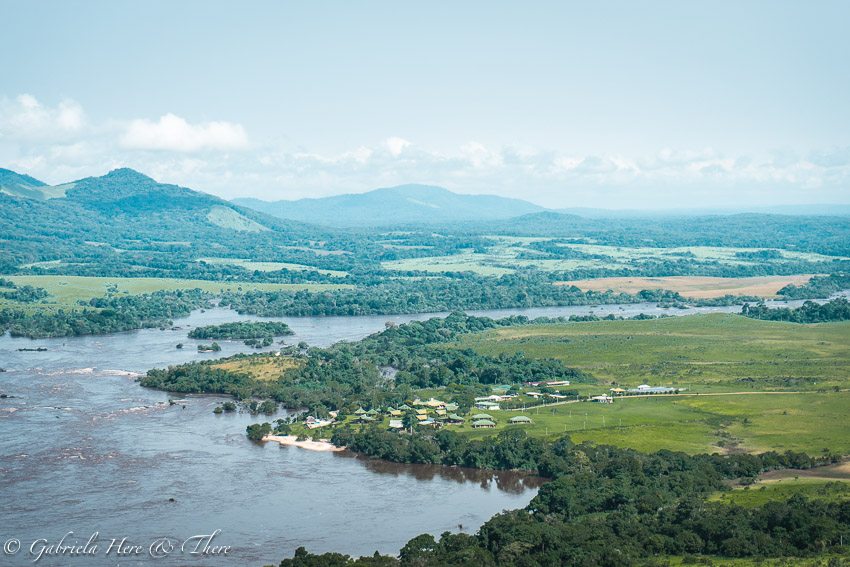 When I found myself in Libreville, the bustling capital city of Gabon, my goal was to get out of the city and explore some of the more remote parts of the country. At the top of my list was Lopé National Park – a Unesco World Heritage Site and park known for its most prominent mandrill troupes in the world.

What I didn’t know at this point was that getting there was going to be a challenge. I had a lot to do in Libreville: I had to arrange my visa for Congo-Brazzaville, and on top of that, I had problems with getting money out of any ATMs in town. In the end, I was running out of cash. Because none of the ATMs didn’t work, I had to transfer myself money using Western Union just to find out that although there were Western Union logos everywhere and I could transfer money with them, Western Union wasn’t functioning in Gabon anymore. I then tried MoneyGram and spent half a day waiting in line to pick up my money. 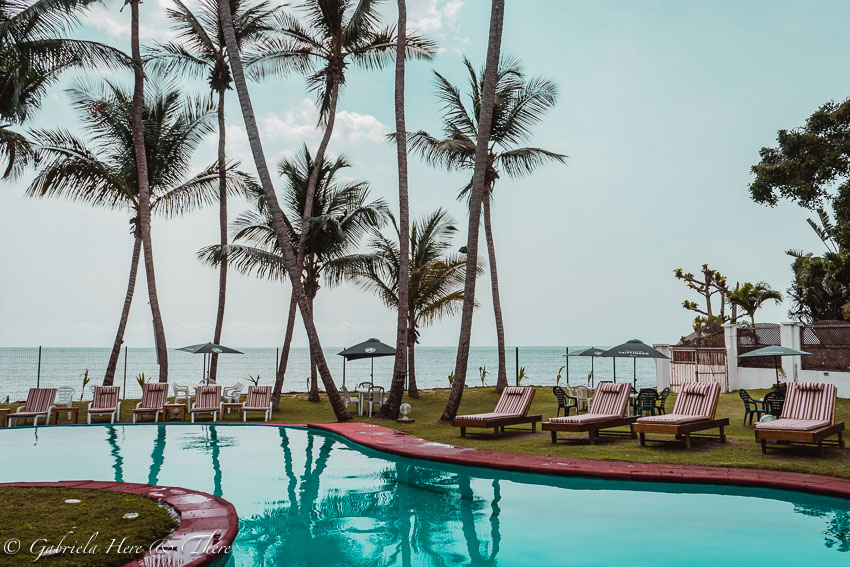 My hotel in Libreville

Where to stay in Libreville: Book your hotel for Libreville on Booking.com.

I had been in touch with Lópe Hotel to get some help arranging my trip to Lópe. The best and I think the only way to visit Lópe is by train because the roads are in bad condition. However, I heard from the Lópe hotel staff that the train hadn’t been running for a few days because of technical issues. Luckily, by the time I was buying the train tickets, the train was running again.

It was a day before Christmas Eve, and the city was busy. All of the locals were traveling to their families, and everyone was at the train station trying to do exactly what I was doing: buying train tickets. I spent hours waiting in line, and when I finally made it to the ticket counter, I was told that there was nothing I could do: the train was sold out.

I visited the train station twice that day, desperately trying to buy the tickets. The second time I got to the station, I came across this Singaporean guy who clearly was a traveler as well. I was surprised; usually, you don’t meet other travelers in these parts of Africa.

He was also trying to buy a train ticket to Lópe for the next day, and we decided to combine our efforts to get the tickets. Somehow we managed to find one employer at the station who spoke English and then introduced us to the station master, who then sold us tickets for the train that was supposed to be sold out. I don’t know how it happened, but I was so happy to have the ticket for the next day finally. I ended up paying 15,150 CFA for a 2nd class ticket for the Omnibus train. I’m not sure if the train master took some extra money for selling us the tickets. Probably yes, but at this point, I didn’t really care. 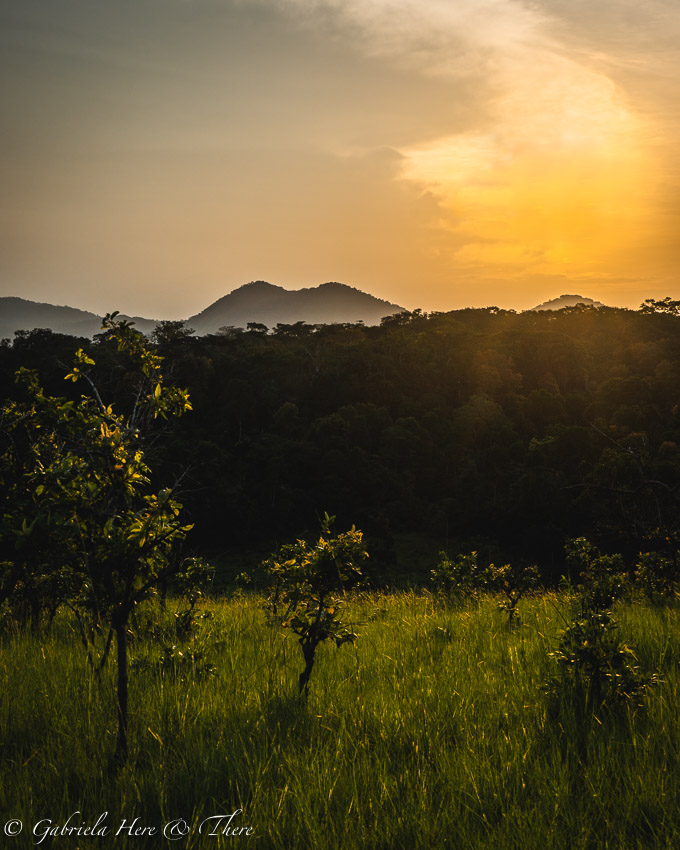 So the next day, on Christmas Eve, I arrived at the train station at 5 pm. The train was supposed to leave at 5:30 pm, but of course, it was two hours late, and we left at 7:30 pm. The train was surprisingly clean and in good condition inside, at least when compared to the Tazara train I’ve taken in Tanzania (that was years ago, though, and I’ve heard that nowadays they have some better Chinese-built trains as well).

Although the seats were relatively comfortable, I couldn’t get any sleep during the night because of my bad insomnia. The only way I can sleep on the train is by having a sleeper cabin with a proper bed and then taking some sleeping pills. Unfortunately, I didn’t have either of those, so I spent the whole night wide awake.

The train also broke down in the middle of the night, and we spent four hours stuck somewhere. I spent the night wandering through the aisles of the train, trying to have conversations with the locals (language barrier was an issue as my French is very limited and not many people speak English), reading my book, and trying way too hard to get some sleep. But when the sun rose, and the train started moving again, I was more than ready to get to my hotel in Lópe and get some rest. 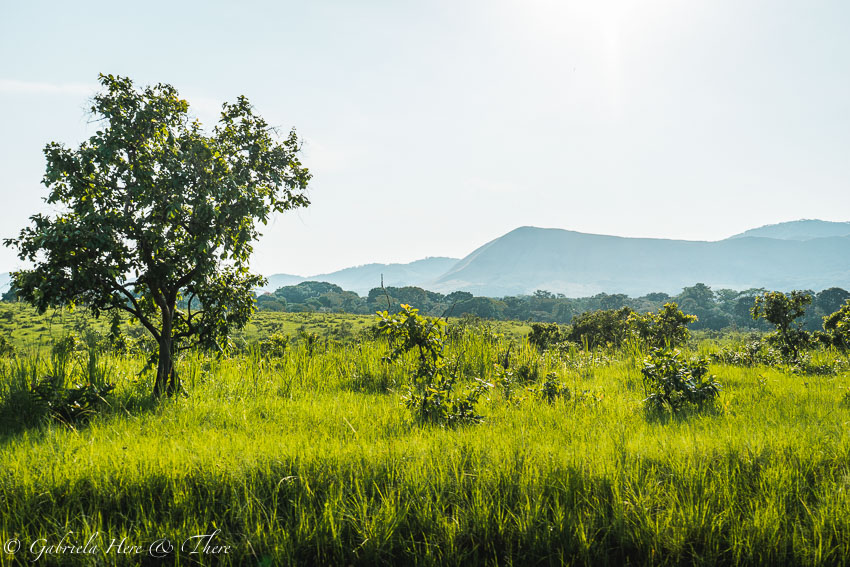 It was almost 9 am when we approached Lope. I was looking out from the window, and there it was: Lópe with its spectacular green hills, framed by the Ogooué River. We hopped off the train, and knowing how hard it was to get the tickets in the first place, the first thing we tried to do was to buy the return tickets to Libreville. The ticket office, however was closed, and we were told to come back later.

Shortly after, we were greeted by the staff from Lópe Hotel and escorted to safari vehicles where we surprisingly met another traveler, a guy from Germany who had arrived in Lopé earlier. We were told that the first thing on the itinerary was a walking tour. We drove to the hotel to drop off some things, but there was no time to take a shower, eat, or do anything else. 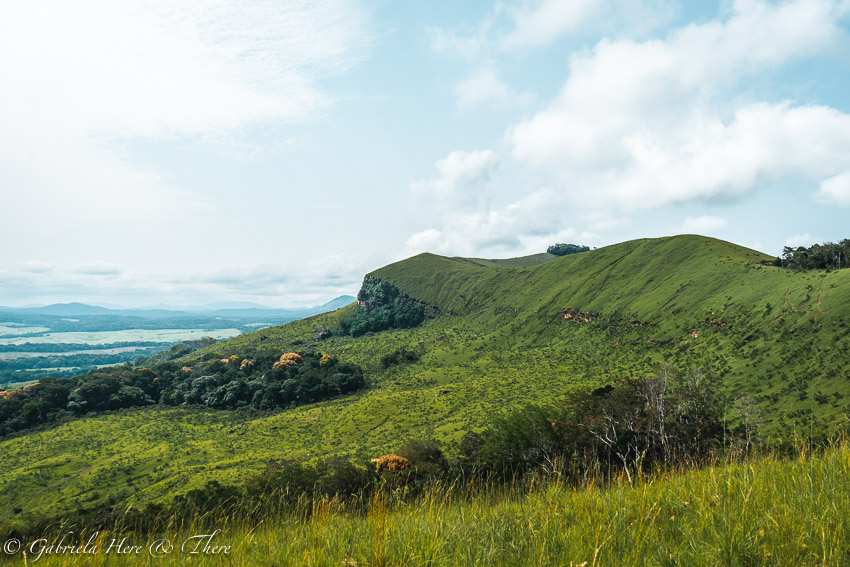 I hoped that I would have been ready to explore the national park, but after a long night with no sleep at all, being all sweaty and dirty, and when I couldn’t even remember when my last meal was, I was exhausted, tired, and hungry. The last thing I wanted to do was go hiking. But off we went, and shortly after, I found myself walking up one of those green hills I had seen from the train. 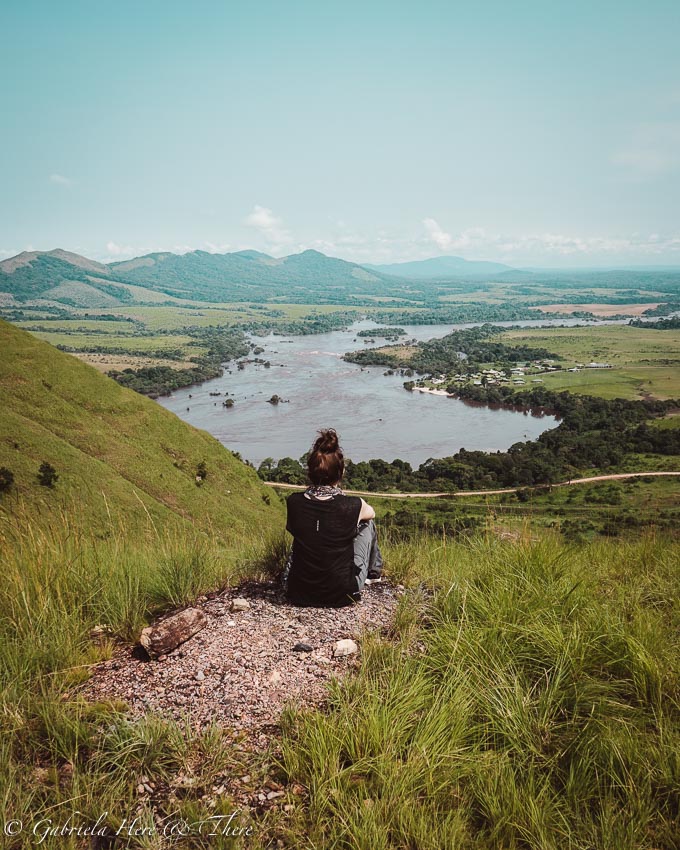 The views were beautiful, but the truth was that I was way too tired to understand anything, and I had zero energy because I hadn’t eaten, so after a while of walking up and down the hills, I decided to head back to the hotel. I later found out from others that I hadn’t missed anything, because they finished the trip soon after and didn’t see animals or anything else interesting.

There was one thing I needed to do before heading back to the hotel, though: buy return train tickets to Libreville. I walked all the way back to the train station just to find out that there was (again) no one working there to sell tickets. I was told to come back later in the afternoon.

I walked back to the hotel, and finally, it was time for me to take a shower, eat lunch and get some sleep before the afternoon game drive. After relaxing for a while, I felt so much better and was ready to explore Lópe when the staff came to pick us up for the game drive. 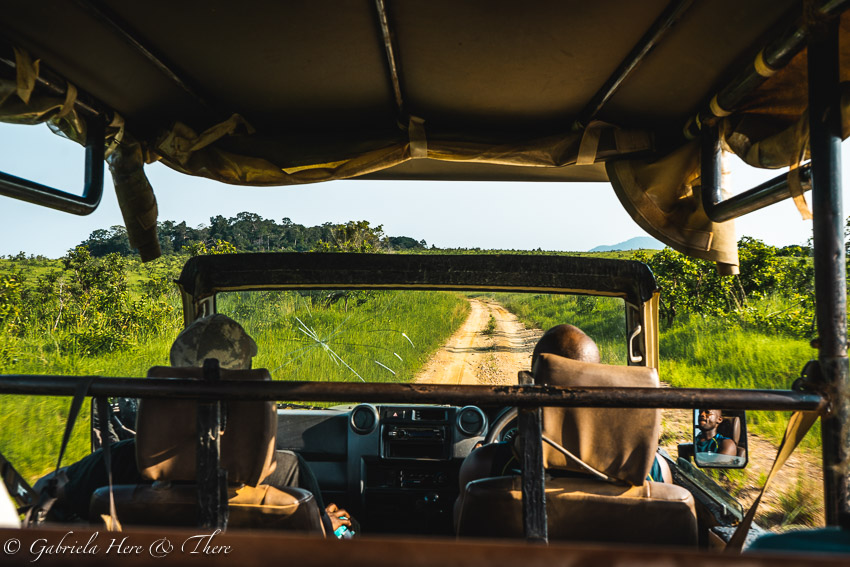 We tried to buy the train tickets before the game drive for one last time, but it didn’t work out. However, this time, we got some new information and were told that it would be possible to buy the tickets on the train. 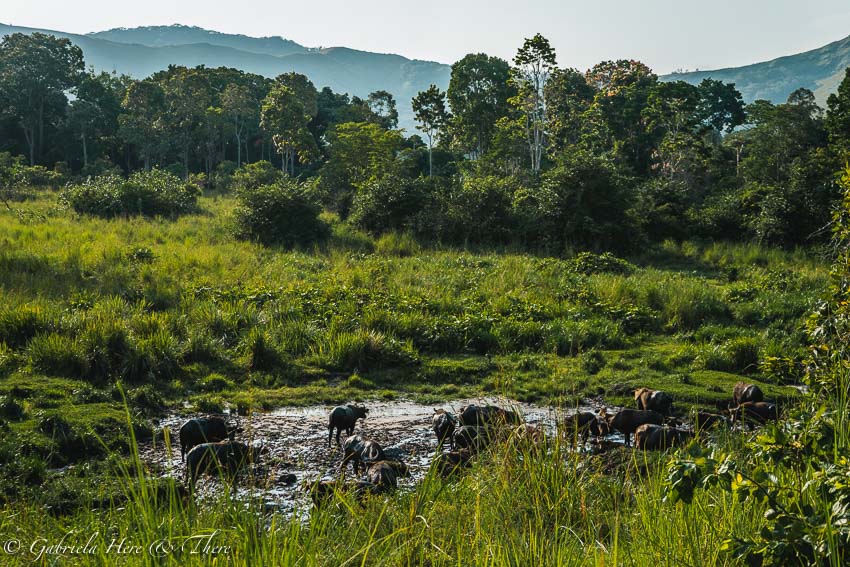 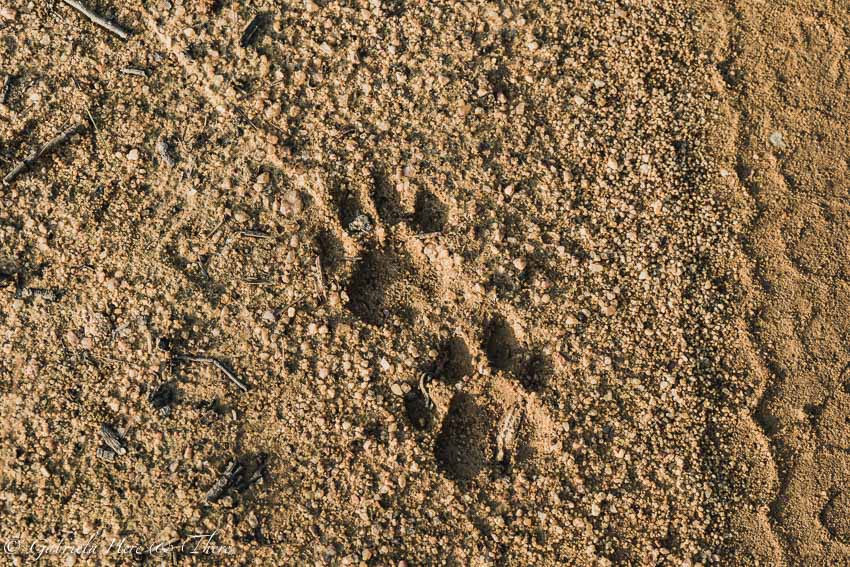 The afternoon game drive was pleasant and relaxing. We didn’t see anything super exciting, and the only animals we spotted were buffalos and forest elephants that were quite far away. We also saw some leopard paw prints, so if you are lucky, you might spot leopards. There were no signs of the famous mandrills, and if you have done a lot of safaris in Africa, you probably wouldn’t be that impressed by Lópe, but I still truly enjoyed the experience. 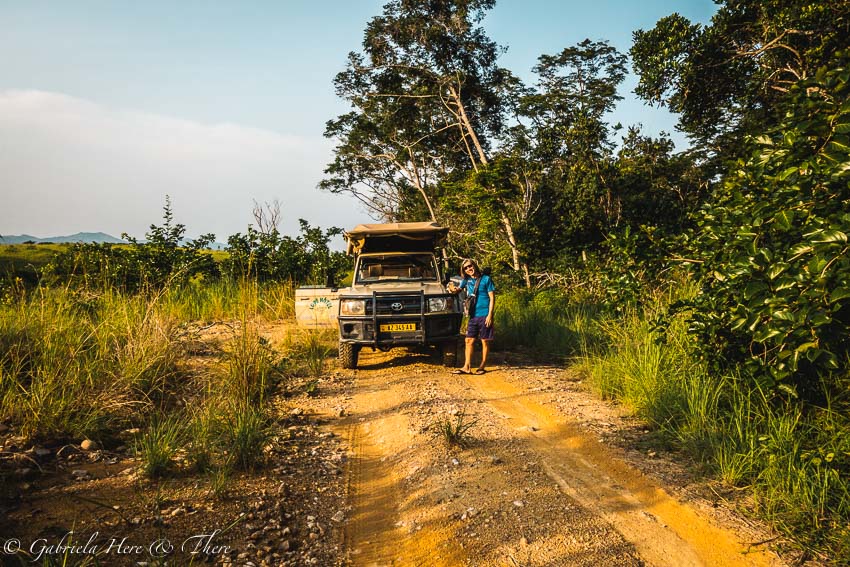 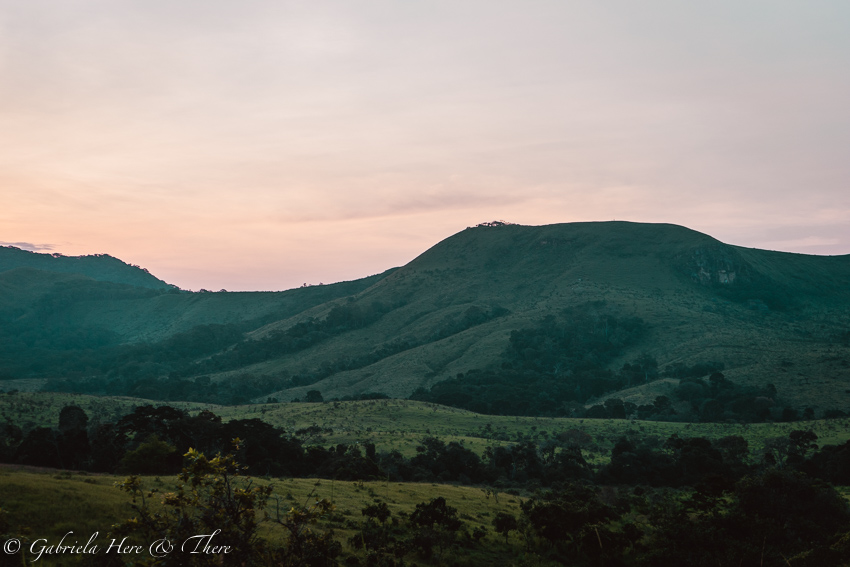 We also watched the sunset, and as always in Africa, it was beautiful. I don’t know what it is about Africa, but the sunsets there are always spectacular.

After the game drive, we wandered the dusty streets near our hotel, grabbed some dinner, and made arrangements for the transport to the train station. The train back to Libreville was supposed to leave at 1 am, so there was time to sleep a little bit before that.

So we went back to sleep just to wake up a few hours after that. Then in pitch black, we drove to the train station where we were told that the train should arrive at 6:30 am. We decided to stay at the train station and wait. In the darkness of the night, there were thousands of different kinds of insects crawling and flying, making sleeping impossible, so we just waited.

At 7 am, the train was still not there. Maybe it will arrive at 8 am or 9 am; no one really knew at this point. This is Africa. You need time and patience when traveling here.

Soon it wasn’t dark anymore, roosters were crowing, and the town was waking up. I grabbed some breakfast from the nearby streetside shop, where chickens, cats, and goats all wandered around.

Getting in and out of Lópe wasn’t the most straightforward task, but then when is it ever easy in Africa? I think that one of the reasons I love traveling in Africa is the fact that it isn’t easy. It’s raw and real, a true adventure. And for everyone up for an adventure, I highly recommend visiting Lópe National Park.

If you would like to see more pictures and videos of my travels in Gabon, check out my Instagram, where I have added all of my Gabon stories to my story highlights.

A Day Trip to Ulu Temburong National Park in Brunei