A review of a shark cage diving tour with Marine Dynamics.

When I was surfing in Muizenberg, Cape Town, there were always multiple shark alarms every single day. I heard stories of past shark attacks and people told me not to go surfing too far. Of course, I was scared of great white sharks after that, but I had still never actually seen one. And you don’t want to see great whites in the water when you are surfing…

South Africa is one of the few countries where you can go shark cage diving to see great white sharks in their natural environment. But this is the only country where the sharks are just 15 minutes boat ride away, and the price is lower as well. I learned that in Mexico the sharks are 18 hours boat ride away which sounds insane! 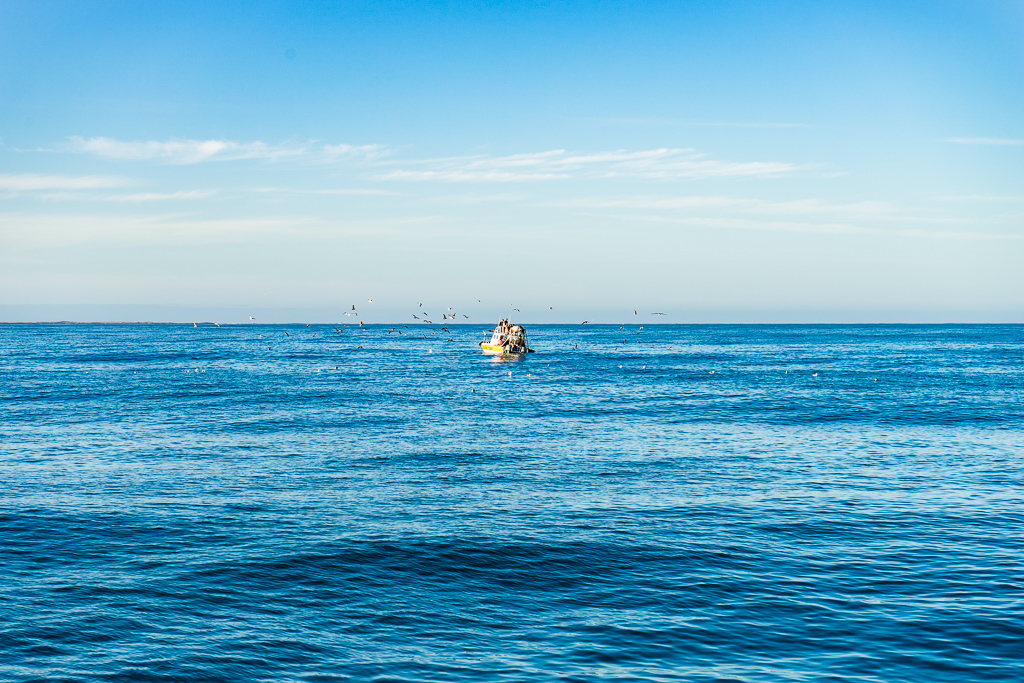 When I was in Cape Town for the first time three years ago, I didn’t do shark cage diving because I wasn’t sure about the ethical side of it. I would never do activities that harm animals like elephant riding in Thailand etc. This time around, I did a proper research and tried to find out if shark cage diving is somehow harmful to the sharks.

I found a tour company called Marine Dynamics. They are not only a shark cage diving company, but they also do research, conservation, and education. Plus they are Fair Tourism certified. They always have a marine biologist on board who then explains more about the sharks and other animals as well.

They also have a luxury boat designed only for shark cage diving and a Great White House with a restaurant, bar and gift shop. Before and after the dive you can get complimentary breakfast/lunch, and they also have snacks and drinks on board. They have a shuttle service from Cape Town to Gansbaai where the sharks are, and this town is about a two-hour drive away. 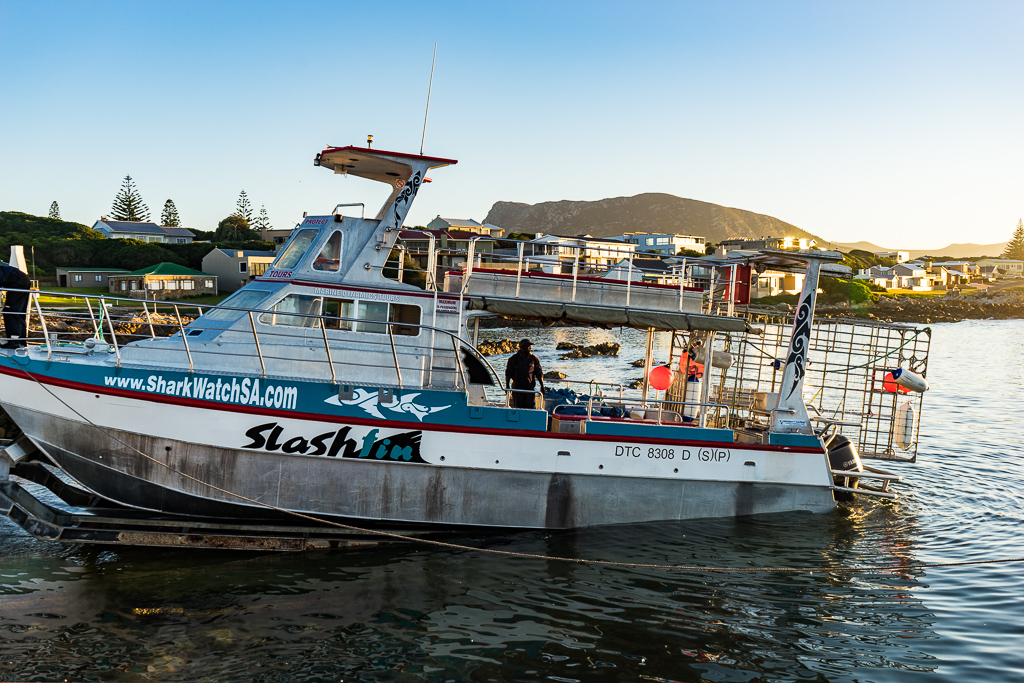 So I had decided to do the tour with Marine Dynamics. There was only problem: the sharks were gone. No one really knows what causes this but the sharks have been missing for several weeks already. This apparently had happened before as well, so it wasn’t new. I heard that many people went to Mossel Bay instead to do shark cage diving there. I was really hoping to do the tour while still in Cape Town, and after several canceled tours during my last week, I finally got a phone call that they had seen sharks recently and they would pick me up the next morning.

The pick-up time was super early in the morning, or should I say in the middle of the night. I actually had to ask the lady on the phone to repeat the time for me three times because I was sure I had heard wrong. But nope, the pick-up time was 2:50 am! But all the best things happen in the morning, like seeing the most beautiful sunrise of my life in Israel or hot air ballooning in Cappadocia! 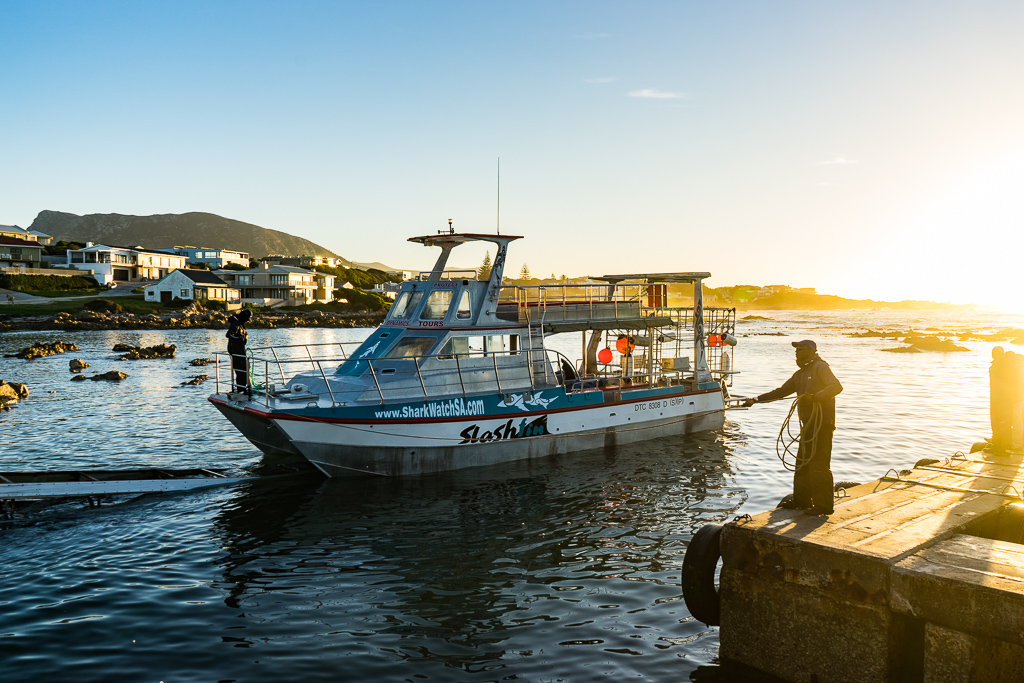 After 2-hour long drive to Gansbaai, we had a little bit time to relax and eat breakfast before it was time to board the boat. On the way to the diving spot, the marine biologist explained everything about the sharks and other marine animals as well. I found this very informative and educational, as I’m very interested in nature and different animals, so it’s always nice to learn new things. I learned for example that great white sharks don’t survive in captivity, and I learned how to tell the difference between male and female great whites. 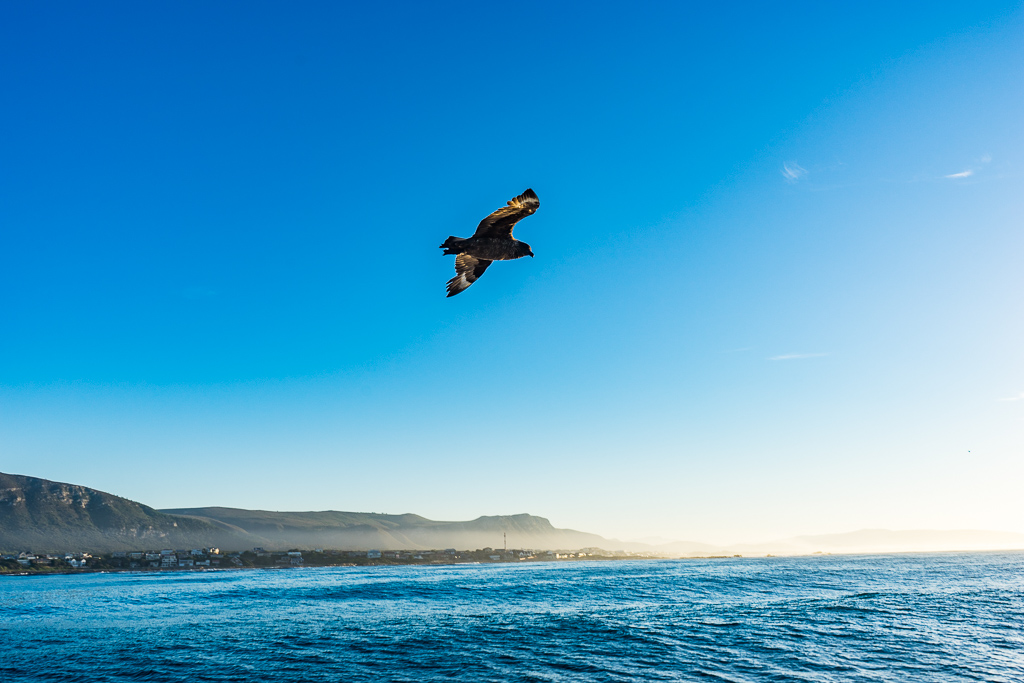 The marine biologist was also happy to answer any questions, and I specifically wanted to know if shark cage diving can somehow be harmful to sharks but turned out it’s not. They don’t really feed sharks, they only use fish oil and small baits, and make sounds to attract sharks, and because they are naturally curious animals, they come to see what’s happening. 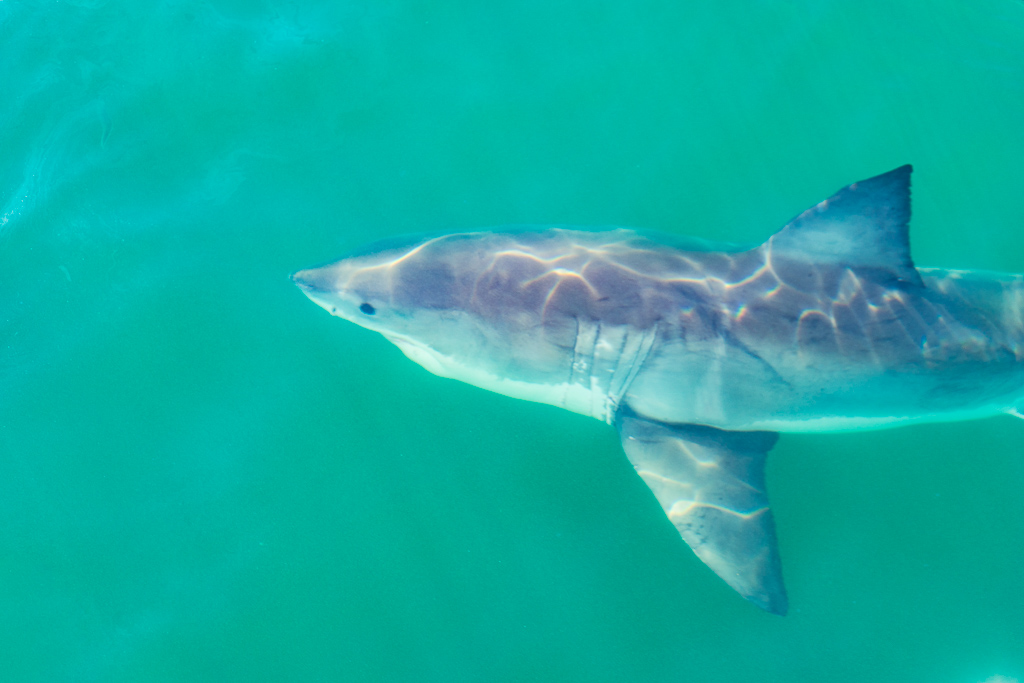 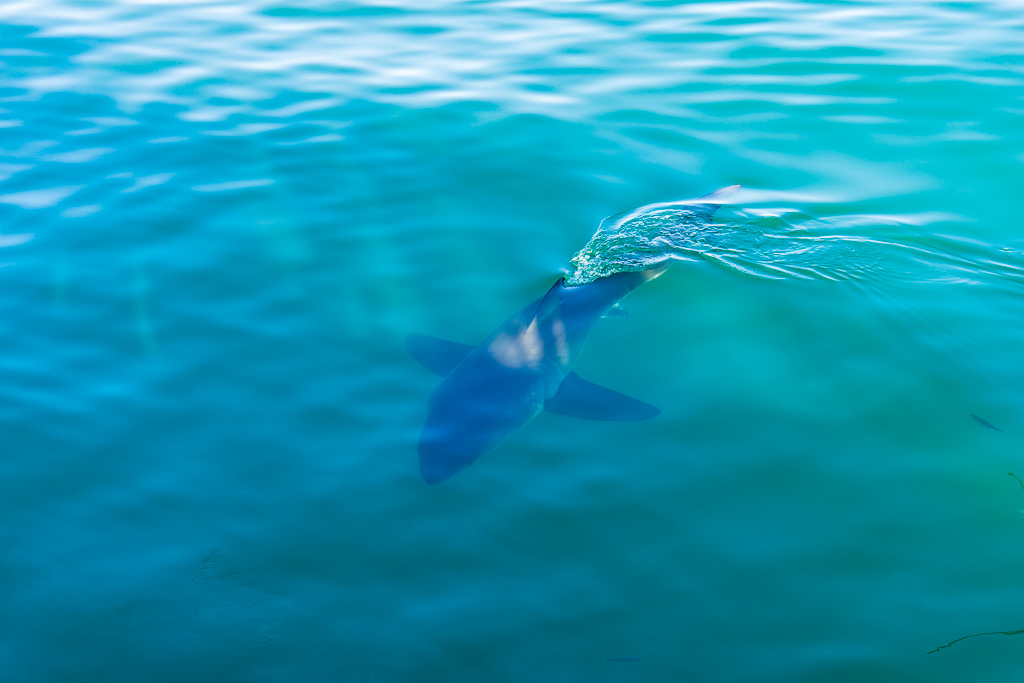 We were in luck to see one small great white shark. Maybe in the winter it’s better, and you can see more sharks, but after a month of no sharks at all, we were extremely lucky! I didn’t get to see the shark when I was in the cage, though, because I was on the wrong side of the cage and the shark always came just to another side. But I did get some footage from the deck! 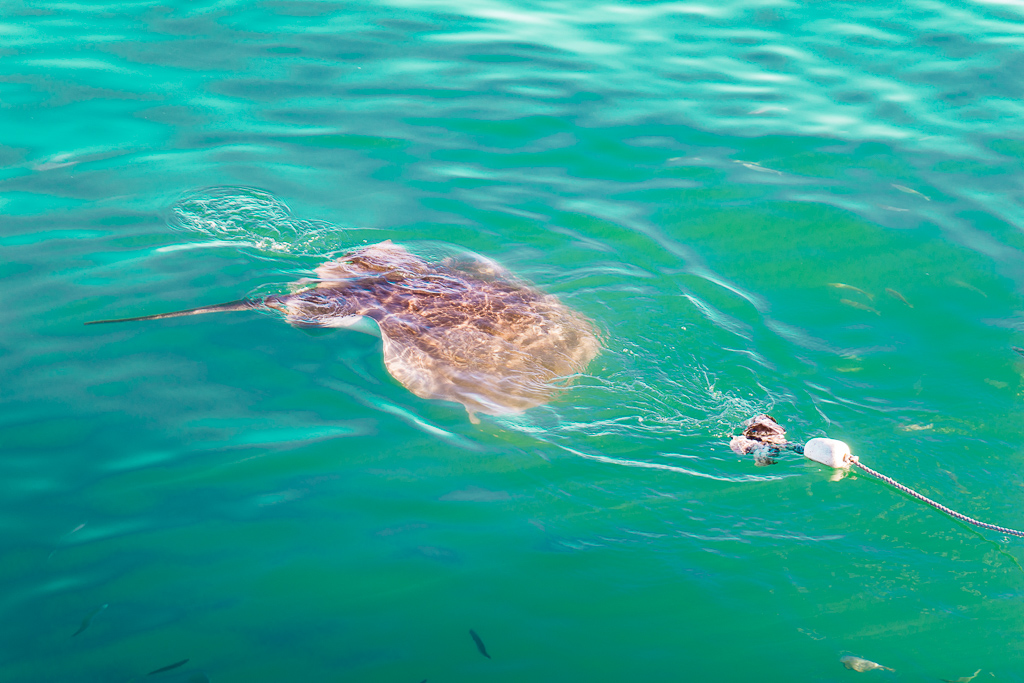 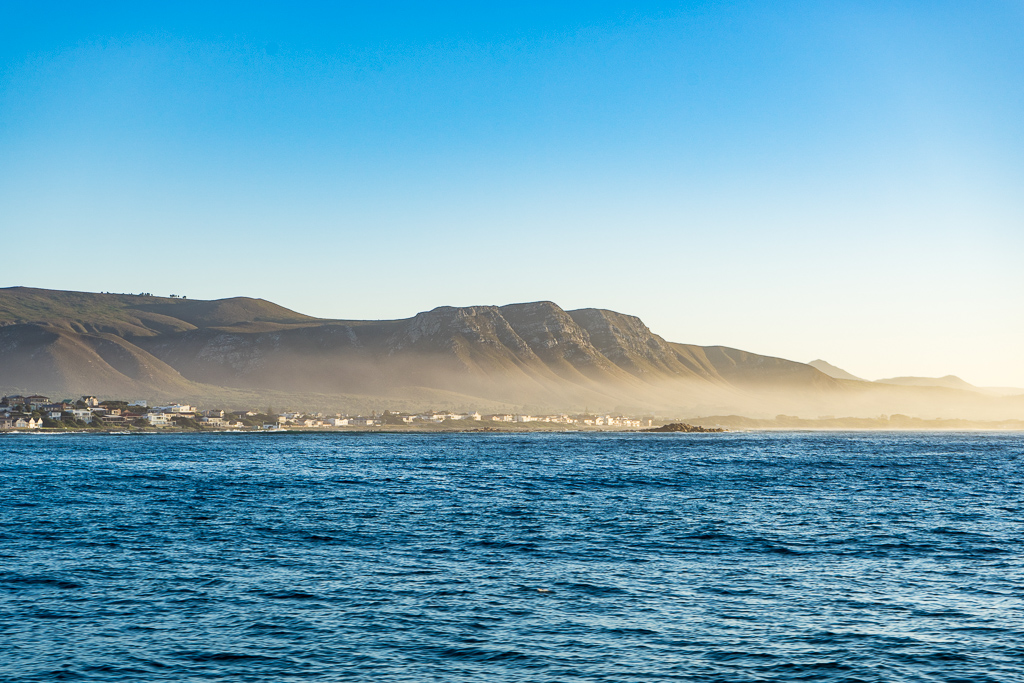 After everyone had experienced the cage, we headed back to the shore where we had lunch, and we were also given a bit more information about the research they do.

I enjoyed the tour a lot, but I would recommend doing it in the winter instead because then the sharks are hunting at the seal colony and you’ll see more sharks and the visibility will be better. Hopefully, I’ll return to South Africa some day, and then I definitely come in the winter so that I could experience shark cage diving again.

The Best Hostels in South Africa

Plettenberg Bay – A Beautiful Spot on the...

Exploring Mauritius Beyond the Resorts

A really unqiue and cool experience, thanks for sharing! We did similar research and are going in the early spring in SA, really hoping to see some curious great whites! We are also going to be swimming with the shark’s prey, the seals. Trying to experience both ends of the food chain 😀

Early spring should be better for spotting the sharks. My timing was bad and there were not so many sharks around.