Bucharest, Romania’s capital city, has a lot to offer and it’s an excellent destination for a city break. While many travelers would only stay there a night or two, I recommend giving the city at least a few days, as Bucharest is one of those places you want to experience slowly. Bucharest offers things to do for everyone: you can learn about the history, enjoy food at one of the many vegan restaurants, stroll the parks, admire the Orthodox churches and art deco architecture. 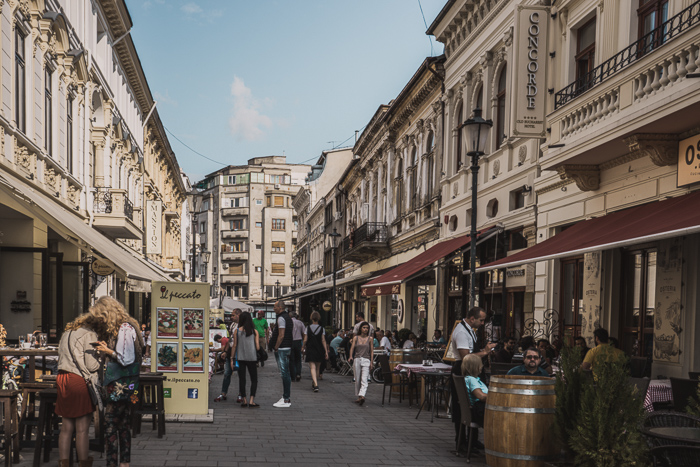 The Old Town of Bucharest (Centru Vechi in Romanian) is an area where you find some pre-World War II buildings. Rich history, restaurants, cafés and beautiful architecture are reasons to visit the Old Town, and it has become one of the liveliest districts in the city. 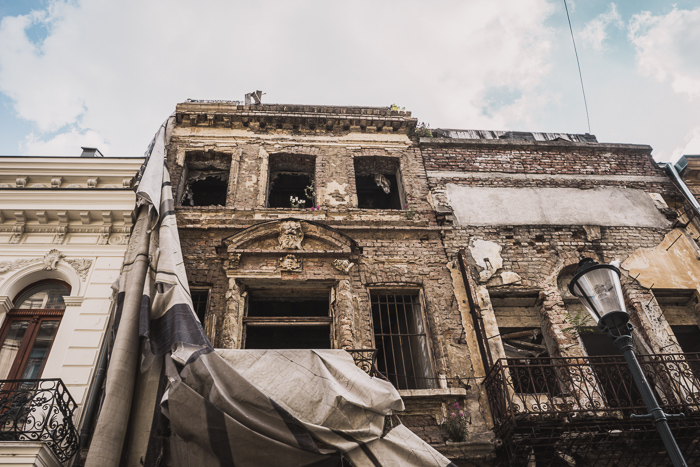 As an aftermath of communism in Romania, there are lots of abandoned buildings in Bucharest – many of them located in the Old Town. I’ve always found abandoned buildings fascinating so seeing them in the most touristy area of the city, mixed between already renovated buildings, was very interesting. 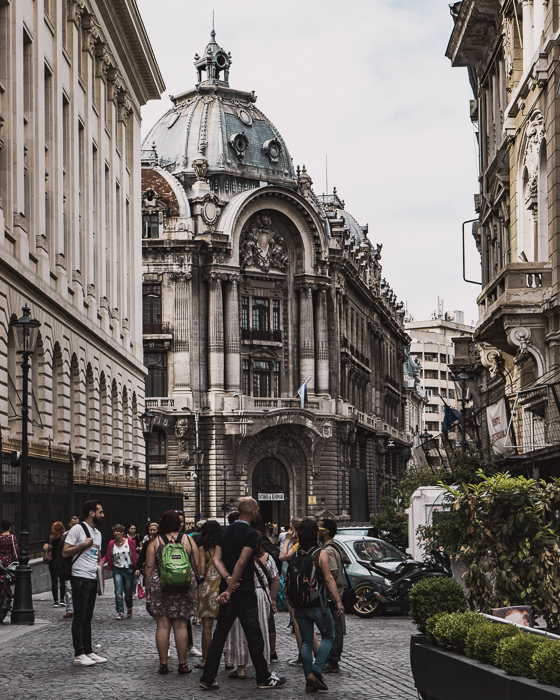 There’s no better way to explore a new city than taking a walking tour, and Bucharest offers many different tours like a Guided Tour of Communist Bucharest, Alternative Tour, Jewish History Tour and Bucharest Old Town Tour. I did a walking tour on my first day in Bucharest, and it was a great way to get an overview of the city and learn more about the history. 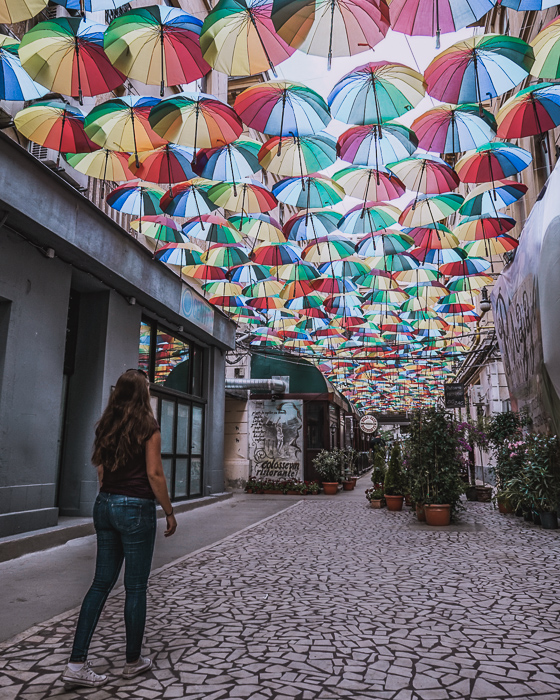 Pasajul Victoria is a street covered by umbrellas, and you can access this place from Calea Victoriei. This is one of the most popular Instagram spots in the city and worth checking out if you would like to take cool pictures. 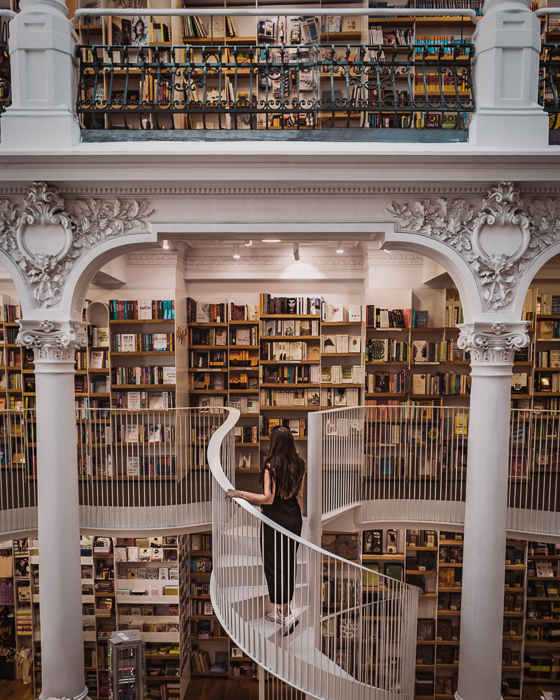 This is a second trendy Instagram spot in Bucharest and the most beautiful bookstore I’ve ever visited! Bucharest is full of great bookstores, but this place is just amazing with different levels and stairs, and the beauty of the architecture. 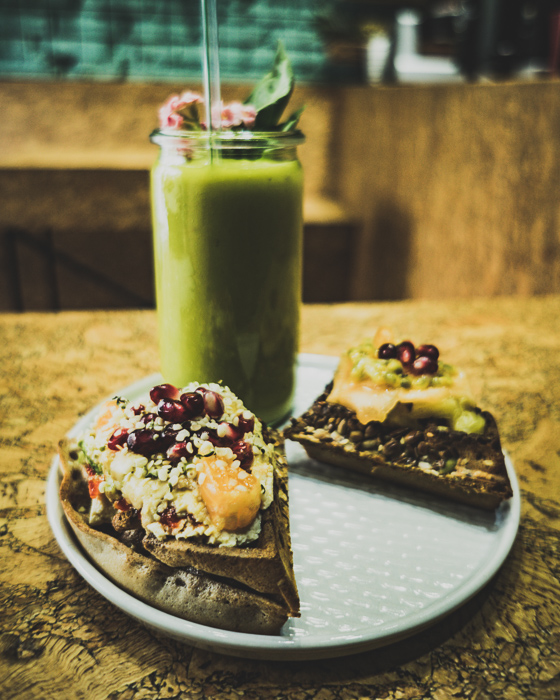 Bucharest’s café culture is cool, and there are lots of trendy and hipster cafés to choose from. In the summer you can also enjoy your coffee outdoors as there are many outdoor garden cafés. The picture above is from VanFruct Specialty Coffee Shop where they also serve vegan options. 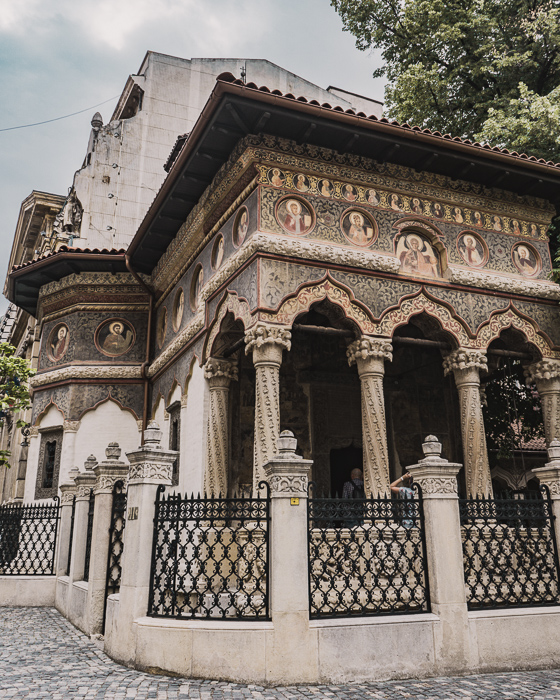 Stavropoleos Monastery is a beautiful church characterized by its stone and wood carvings. It’s located in the heart of the old town, so it’s easily accessible. What’s interesting about this monastery, is that they also store a significant number of old books. Check out the picture above of one of those massive old books! 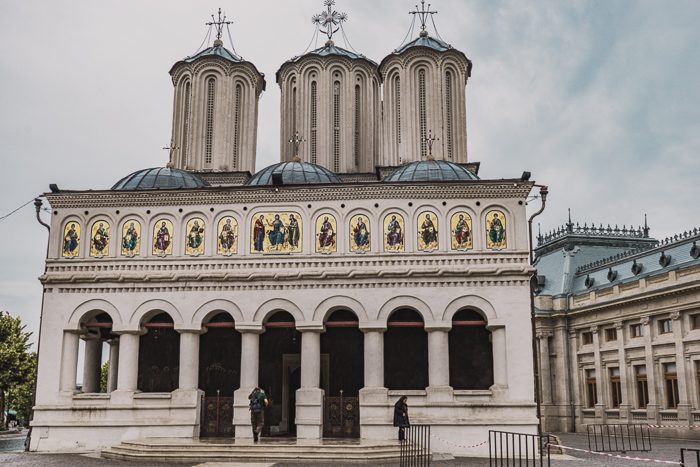 The Romanian Patriarchal Cathedral is a functioning Orthodox Cathedral located next to the Palace of the Patriarchate. This spot has been the core of the political and religious life for three centuries, and it’s worth taking a trip here. 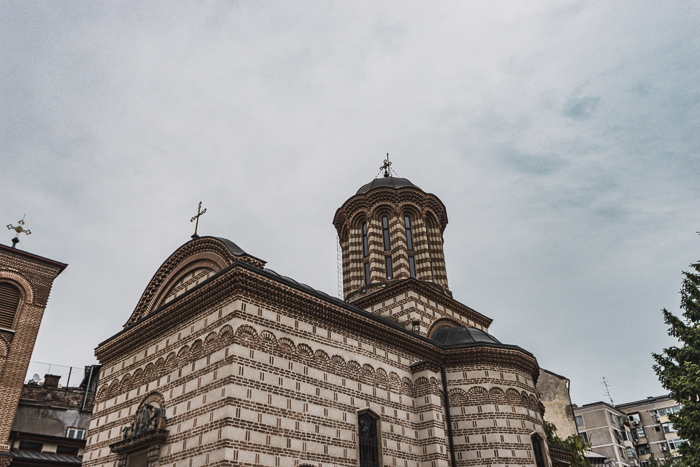 Curtea Veche (the Old Princely Court) takes you back in time to the era of Romania’s ancient Wallachia region. Here you can also find the oldest church in Bucharest: Biserica Sfântul Anton. 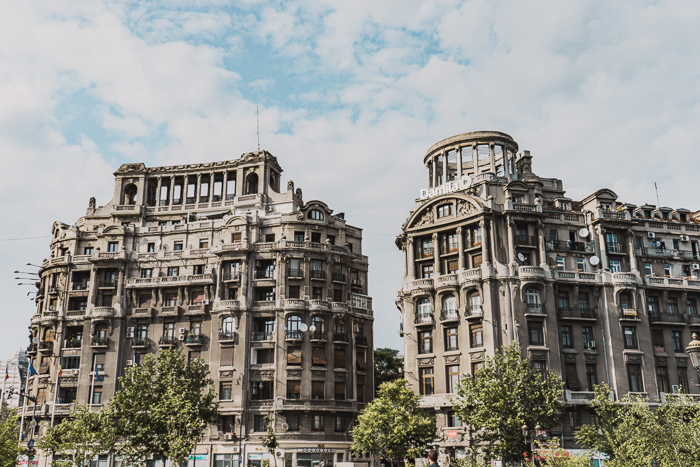 Bucharest is often referred to as Little Paris, mostly because of its elegant architecture, but several different architectural styles have influenced the city. Brancovian style, Neo-Romanian style, Art Nouveau, Art Deco and communist era style are all part of the city’s architecture, and this makes it a unique place. 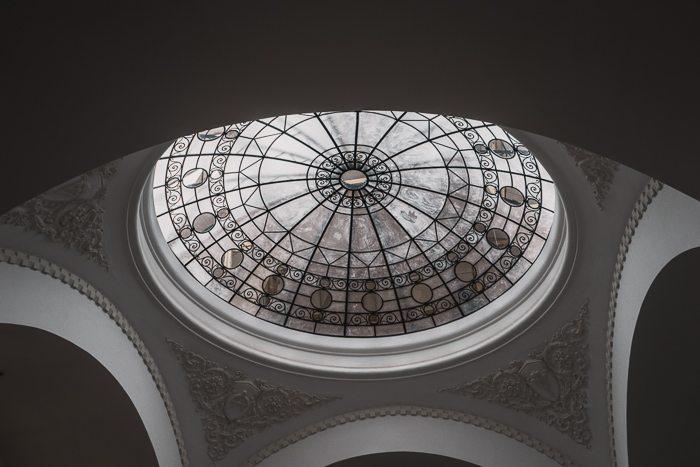 Speaking of the architecture, even the government buildings in Bucharest are stunning. The City Hall is an excellent example of this, and you can visit the building on Saturdays and Sundays, as well as on official holidays. 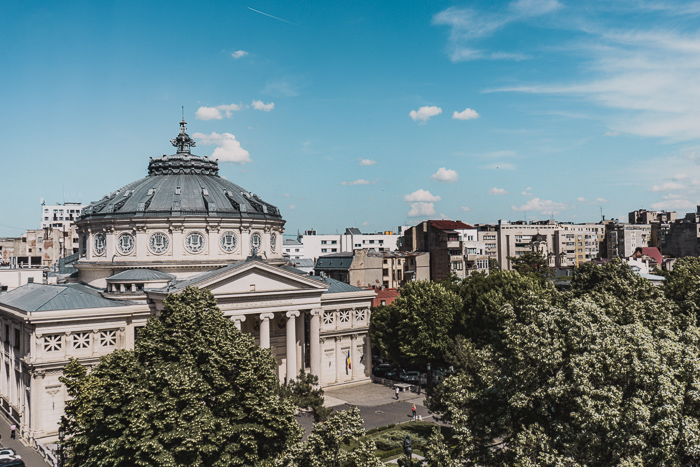 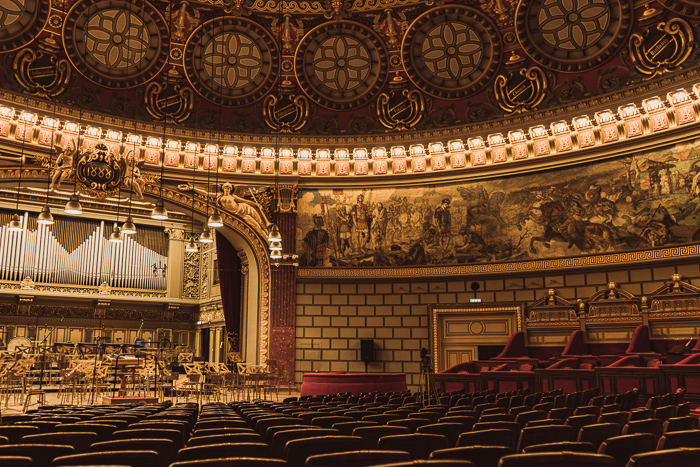 The Romanian Athenaeum is a concert hall in the center of the city, just next to Hilton Hotel. It’s open for visits, and I highly recommend going there to admire the architecture. The building looks nice from the outside, but it’s even more stunning inside! 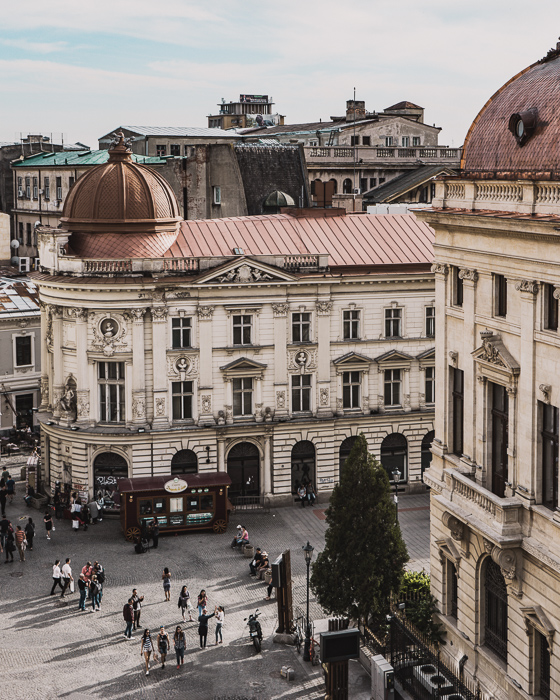 I love rooftops bars, and I try to visit at least one in every city I travel to. In Bucharest, I visited Pura Vida Sky Bar that offers some of the best views over the Old Town. The bar is part of the hostel, so this is a great place to stay if you’re looking for budget accommodation. 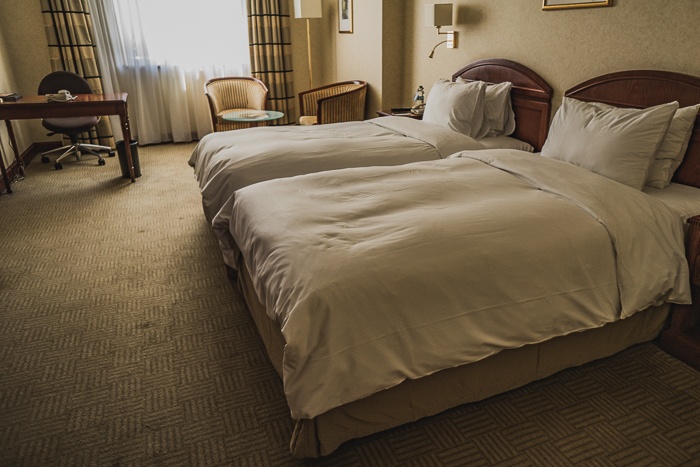 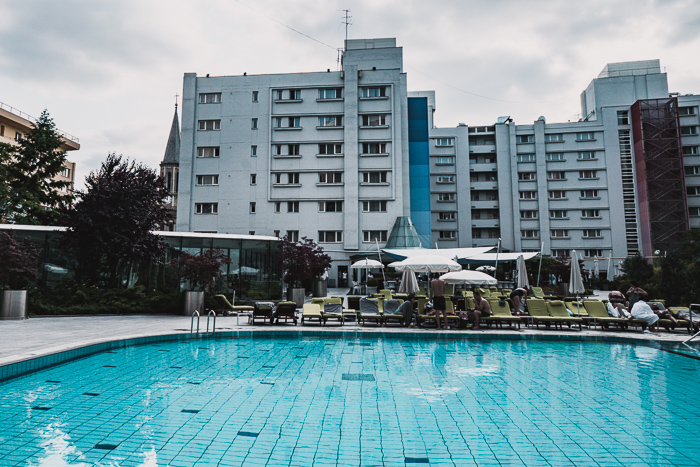 Bucharest offers many accommodation options for all budgets. There are plenty 5-star hotels too, and I had a chance to stay at two of them: Athenee Palace Hilton Bucharest and Radisson Blu. Both were stunning with great facilities and what I liked about Radisson was the outdoor pool, whereas from Hilton you can get the best view of the Romanian Athenaeum and free drinks if you have the lounge access. For more pictures and the latest availability, check out the hotels on HotelsCombined: Hilton and Radisson Blue. 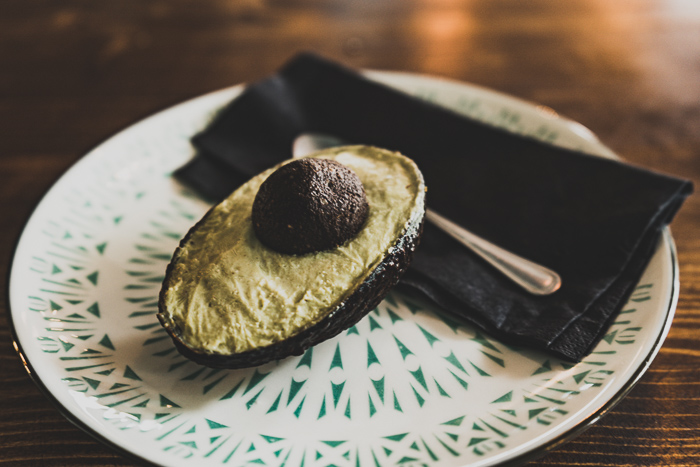 Bucharest is a great city to visit for foodies and vegans are not forgotten! There are many vegan and vegan-friendly restaurants offering delicious vegan meals. I even had a chance to taste an avocado ice cream similar to what they sell in London – I just paid a third of the price. 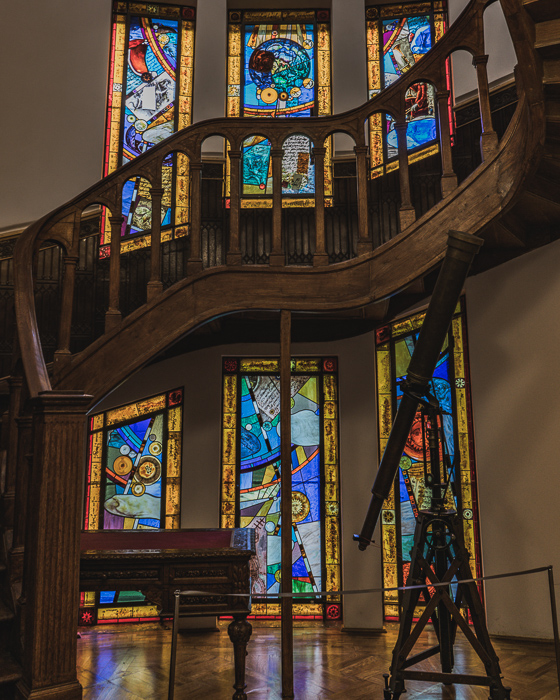 The Astronomical Observatory of Bucharest is a beautiful, old building and open for public during visiting hours (check them out here). Try to go there during a clear night so you’ll have a chance to use their telescope for observing. 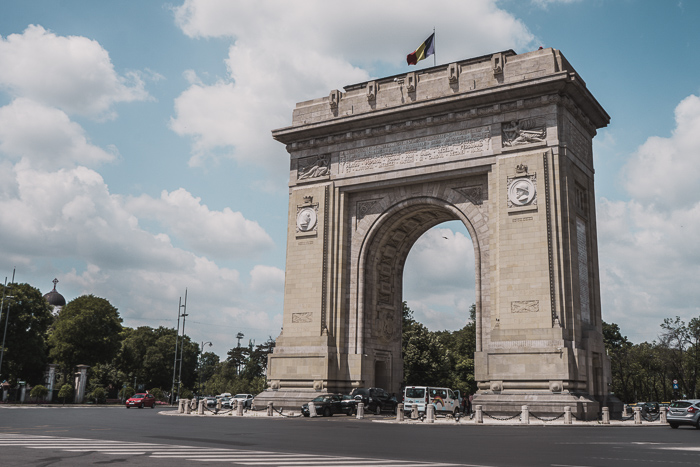 Paris is not the only city with The Arch of Triumph, Bucharest has its own too. The first version of it was built in 1878 after Romania gained its independence. It has then been replaced several times, and the new arch you can see now is from 1936. 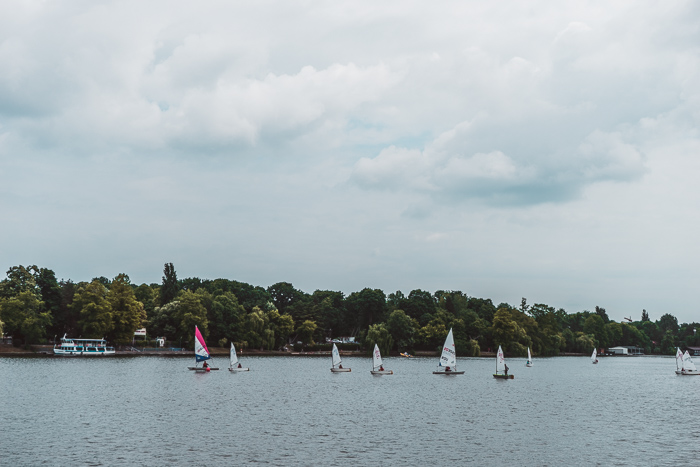 This beautiful lake is located on the northern side of the city. If you need a break from the city life without leaving the city, spend a few hours touring the lake by boat. 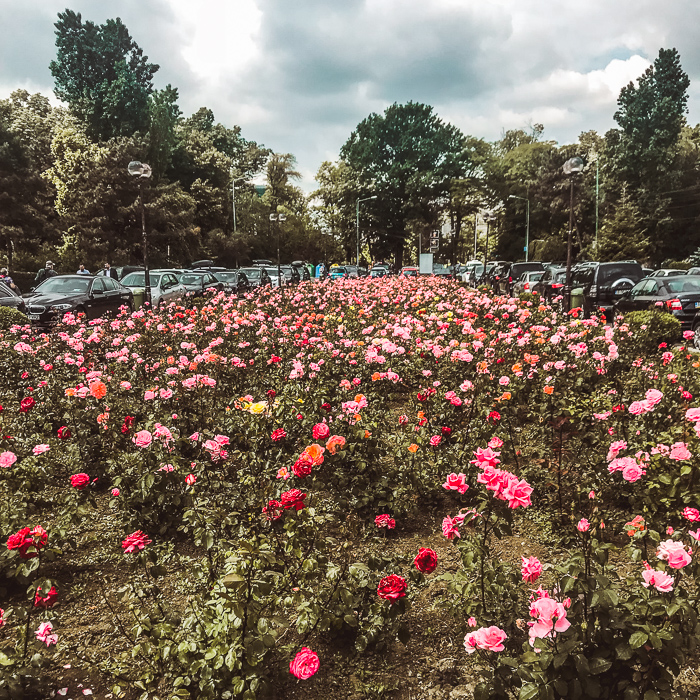 Bucharest also has some green spaces like parks and gardens. The Herăstrău Lake is surrounded by a park and other places worth checking out are for example Cișmigiu Gardens and Parcul Alexandru Ioan Cuza. 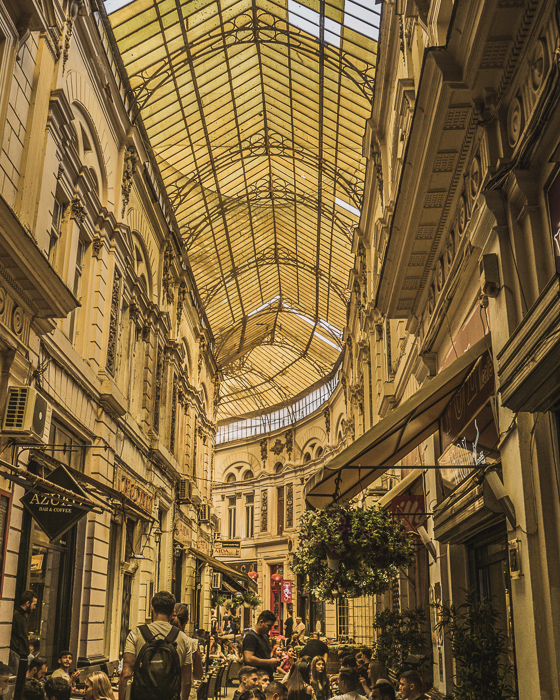 Pasajul Macca-Vilacrosse is a unique place in Bucharest. This passage hides some restaurants and bars inside, and it’s covered with yellow glass making the light softer and warmer. Here you can see a lot of people smoking sheesha, and it’s a great place to have a drink or two. 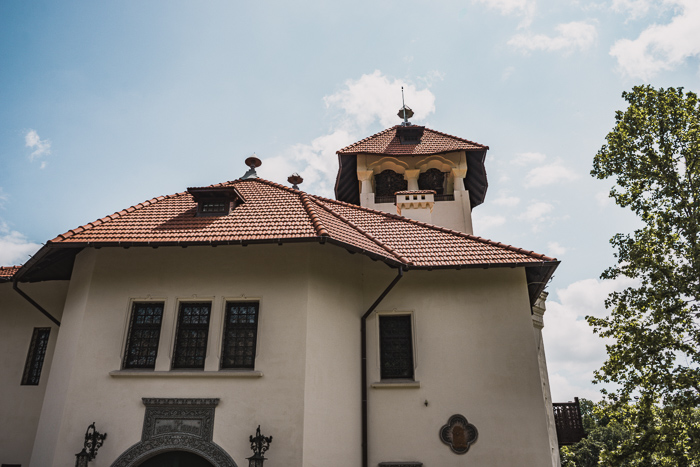 Muzeul Nicolae Minovici was the first museum dedicated to folk art in Bucharest. The place is also worth visiting for the architecture as the villa is one of the first neo-Romanian constructions in the city. 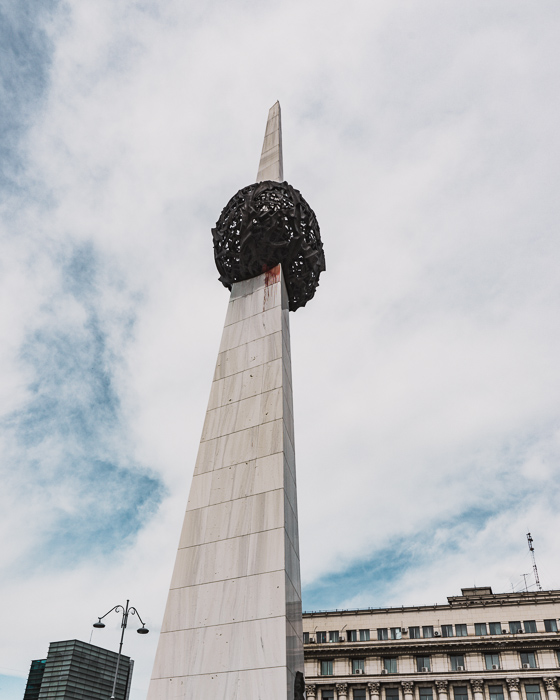 The Memorial of Rebirth honors the victims of the of the Revolution of 1989 which saw the end of Communist rule in Romania. The revolution took place at the Memorial Square where the statue was built in 2005. Many local people have mixed feelings about the statue, and they have given it nicknames like the “potato on the stick.” The statue is located in front of the former Central Committee of the Communist Party building from where Nicolae Ceaușescu, former communist politician fled by a helicopter. To learn more about Romanian communist history, I highly recommend doing a communism-themed history tour. 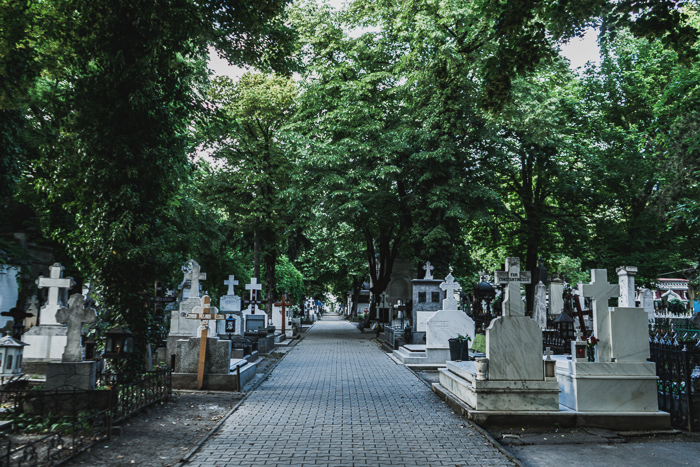 Bellu Cemetery is the largest and most historic cemetery in Bucharest. It’s interesting to visit on your own, but I highly recommend doing a guided tour to learn about the history and hear all the interesting stories. 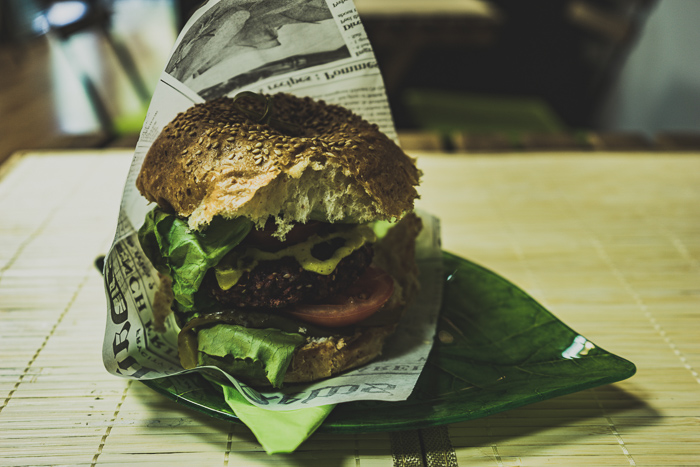 Bucharest is very cheap compared to many other European capitals. Romania is part of the EU, but they use Romanian leu instead of euros. This means that for example taking an Uber won’t break the bank. For instance, I pad 40 lei (equals around 8€) for a half an hour taxi ride to the airport. Food and drinks are also very affordable. 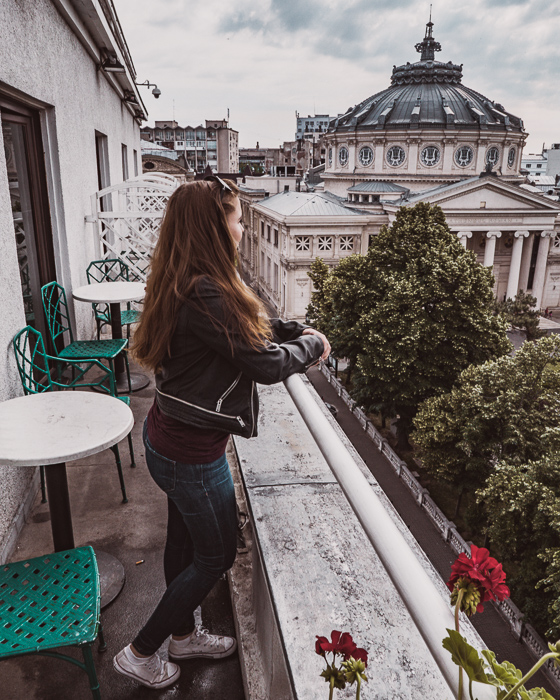 Bucharest is a very safe city to visit, and as a solo female traveler, I never experienced any street harassment, even when walking back to my hotel late at night. You also won’t experience any hassle you do in very touristy destinations – no one is trying to scam you or sell you anything.

Bucharest is a great place to start your adventures in Romania, and there are also tons of options for day trips you can make to other parts of the country. Here are some suggestions:

Sphinx, Babele and Ialomitei Cave – See the natural wonders on the Bucegi Mountains, Babele and the Sphinx.

If you have more time, check out these multi-day trips:
3-Day Medieval Transylvania Tour – Discover Transylvania on a 3-day sightseeing tour of Sibiu, Brasov, Sinaia and more. 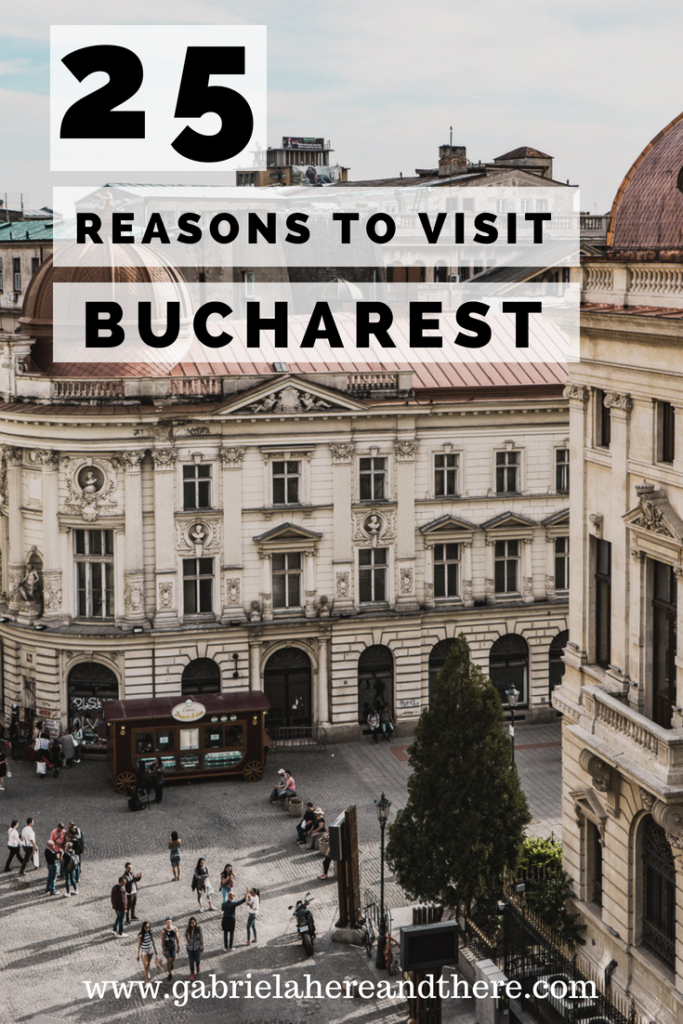 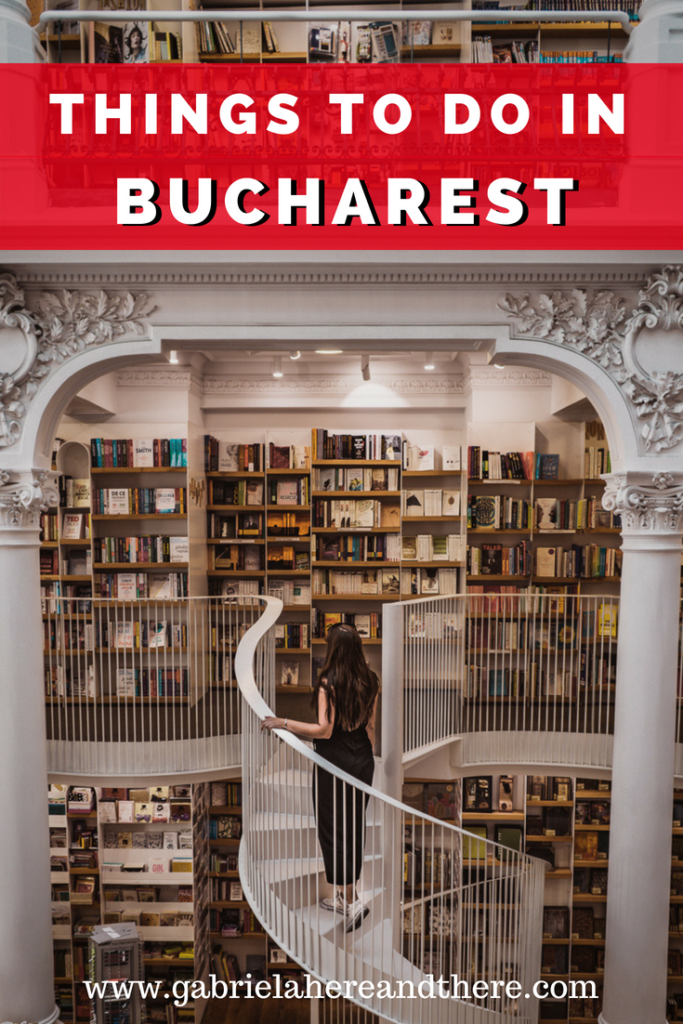 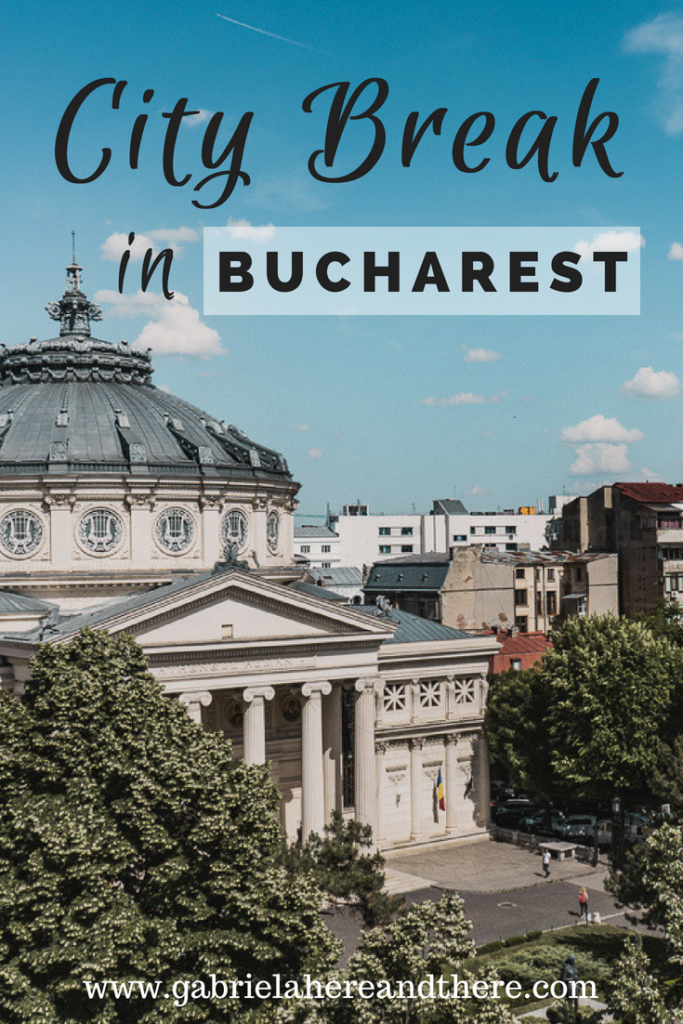 Malta: One Week Itinerary for Malta, Gozo and Comino

The Best Places for Sunsets & Sunrises in...

How to Buy Alhambra Tickets

10 Pictures That Prove San Marino Is the...

Lovely, lovely pictures of Bucharest. It has been eluding me or me eluding it, the fact is I haven’t been there. But friends have been and their and your pictures say I’m missing something. I must plan something soon.

Thank you! You really should travel to Bucharest. It’s a beautiful city 🙂

How beautiful! I am obsessed with the umbrella street. Need to see one of these in real life. C

Yes, the umbrella street was lovely!

Wow! Bucharest is successfully added to my bucket list 🙂 And I’m really really motivated by seeing your country count!!! Thanks for being the inspiration.

Hi, Gabriela. I’m so glad you also included some interesting spots in Bucharest that are less known by tourists like the Bellu cemetery or the Nicolae Minovici museum. It’s always interesting to explore different sides of cities.

Hi! I’m Gabriela - adventurous solo female traveler, blogger, and photographer. I’m on a quest to visit every country in the world and have already seen over half of the world (100+ countries). In this blog, I share stories and photos of my adventures, destination guides, and vegan travel tips.