Lake Assal is a crater lake in Djibouti. More than 150m below sea level, it’s the lowest point in Africa. I would call this place the Dead Sea of Africa. Just like the Dead Sea, the water is also very salty making it possible to float there. For anyone traveling to Djibouti, visiting Lake Assal is a must! 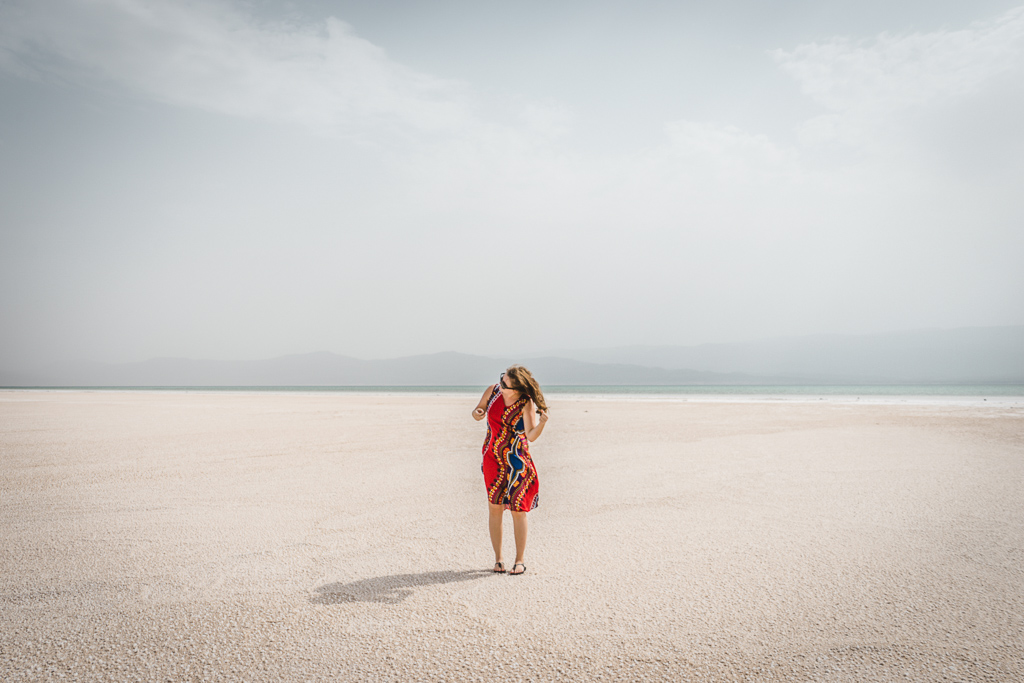 Lake Assal is a cool place to visit for sure, but it won’t come cheap. Djibouti is a very expensive country to travel. Food, transportation, and accommodation are all more expensive than in neighboring countries. Ask any tour company, and they will quote you an extremely high price just for a short day trip to Lake Assal. 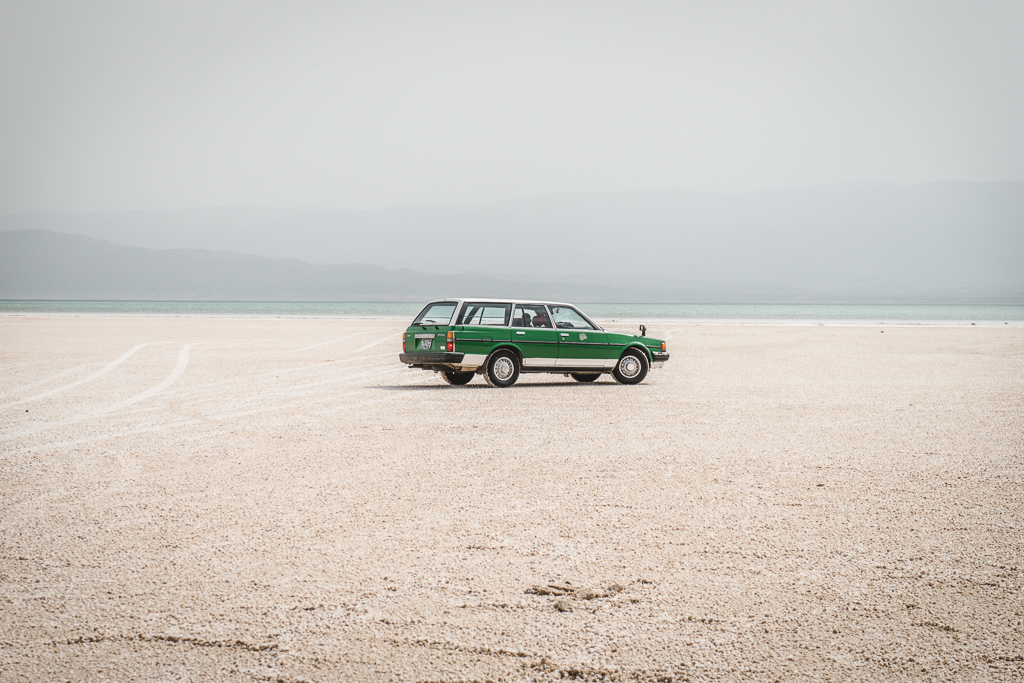 The cheaper option will be taking a taxi there. I read all kinds of things online that you should only take a 4WD car, but no, you don’t need one. I took a cheap, old taxi and it was just fine. And by cheap I mean cheap in Djiboutian standards. I organized the taxi a night before so that we could leave early in the morning. The first price the taxi driver quoted was whopping $200 (and believe me, this is still cheaper than the tours). I managed to get the price down to $140. If sharing the car with four people, this would be quite reasonable actually – only $35 per person. However, I was traveling alone and just like in Somaliland, there were no other tourists in the country. So I sucked it up and paid because what are the chances I would ever come back to Djibouti? 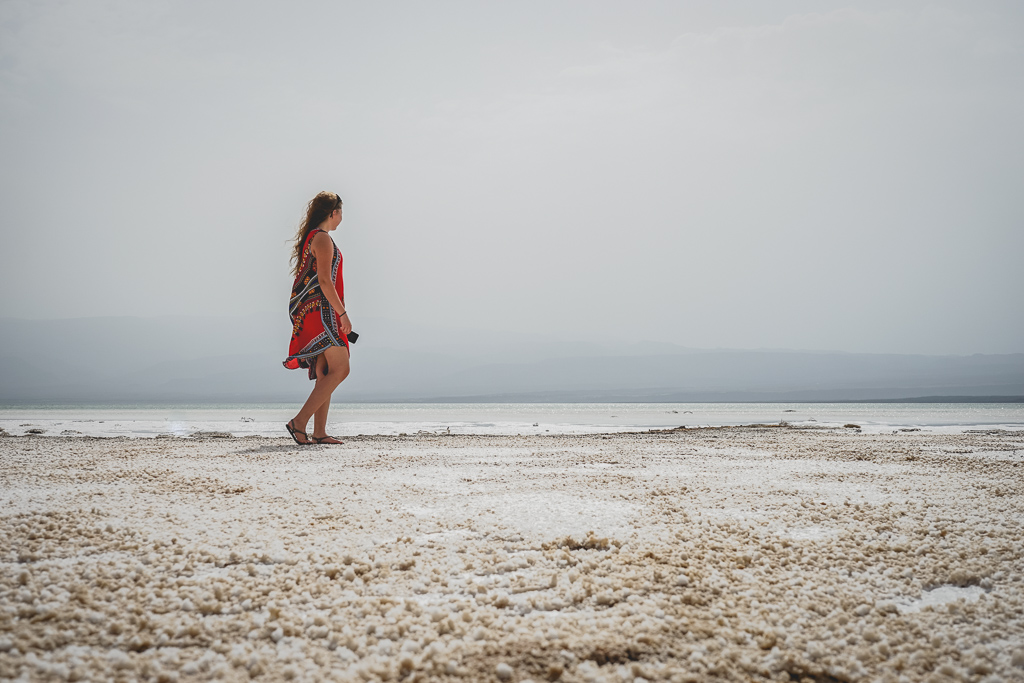 I hadn’t really planned my visit to Djibouti so that I would be there during the best season. Visiting Djibouti was part of my bigger Cape Town to Cairo trip, so I ended up getting to Djibouti in the hottest time of the year. And in Djibouti, the country which is mostly desert, the summers are extremely hot. The temperature was around 50 °C (122 °F) during my stay there, and it was too hot to do anything. For the day I visited Lake Assal, I bought a “beach dress” from a local market because I foolishly thought you could go swimming there. The truth is that you can’t if you go there in the summer because the water is just unbearably hot.

The drive from Djibouti City to Lake Assal takes around two hours one way. It’s better to leave as early as possible to be there before the harsh midday sun. Take a lot of water with you because there are no facilities or shops anywhere near the lake. You will need it not only for drinking but also for rinsing if you go swimming (or if you just get your feet wet as I did). The water is extremely salty, and it will hurt if you don’t rinse it. I only got my feet wet but could still feel the salt water burning. Also on the way to Lake Assal, you’ll pass some remote villages where people live in very harsh conditions. We stopped for a little girl who was waving on the side of the road. Luckily, both my taxi driver and I had some extra food and water to give to her. I can’t even imagine people living in the extreme heat in the middle of nowhere with no water sources and hardly any food! 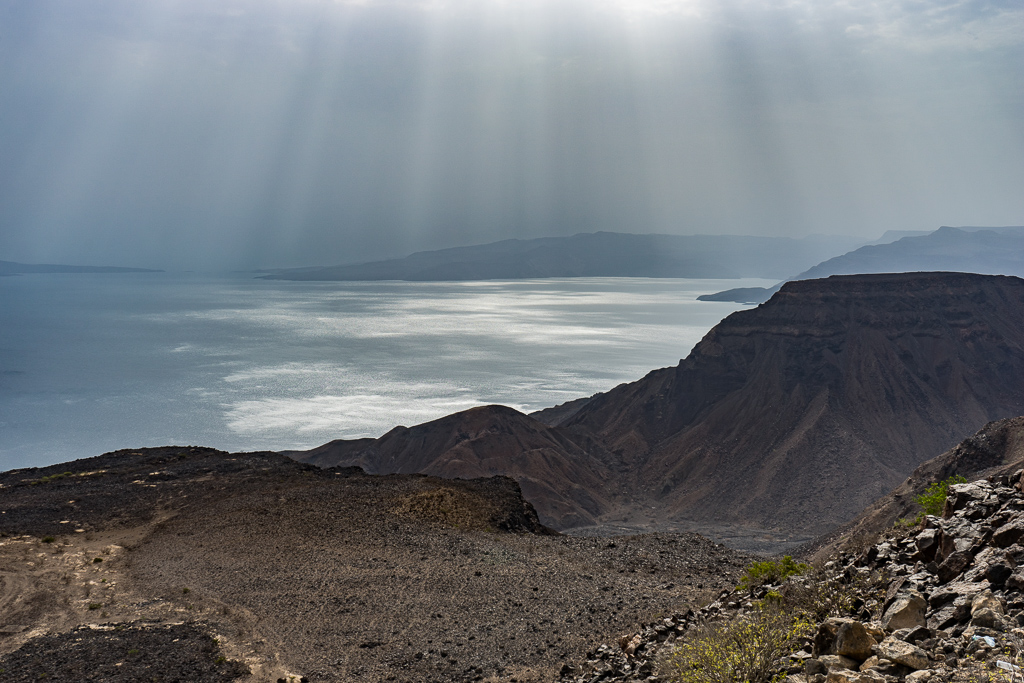 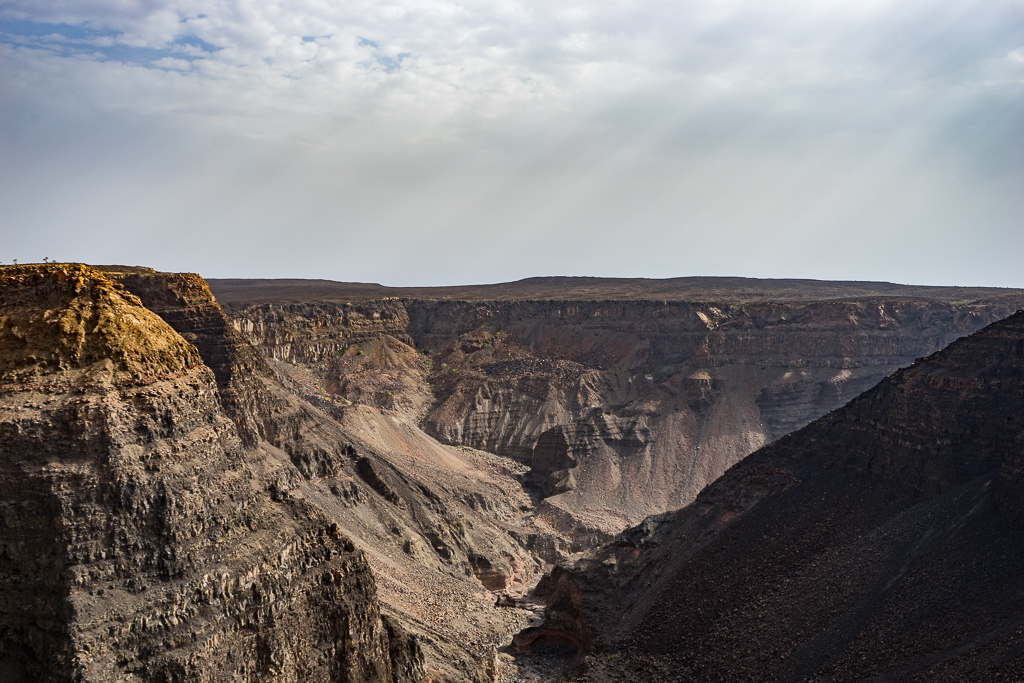 Just before arriving at the lake, there is a viewpoint which is worth checking out. It gives you a view of a canyon and nearby sea. 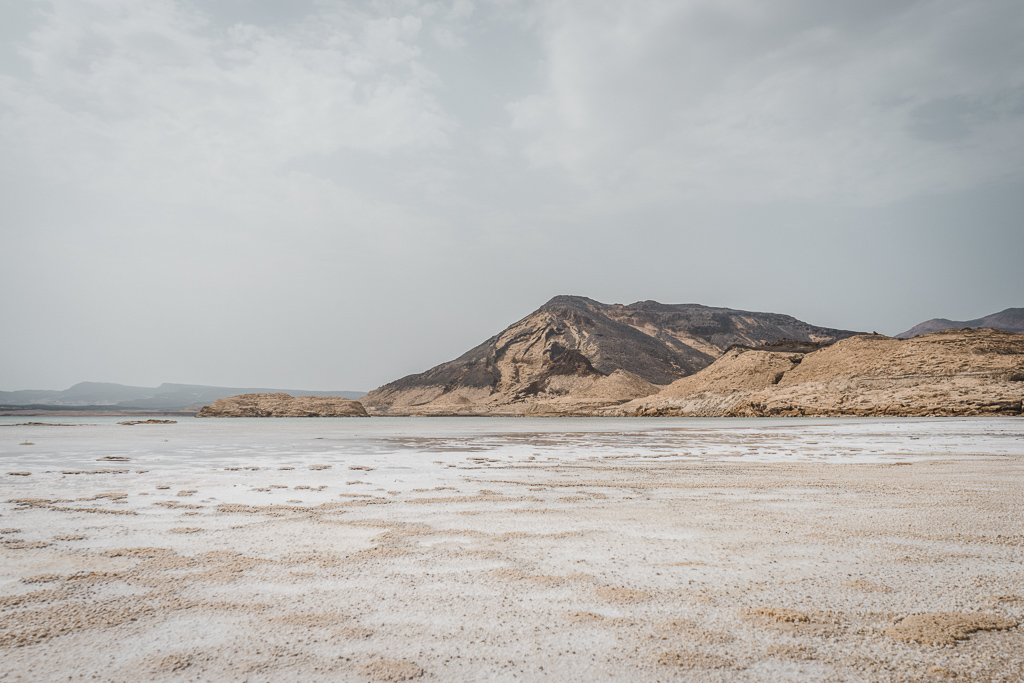 When you arrive at the lake itself, you are free to walk around and do whatever you want. There are no other people anywhere near, and you can have the place all to yourself. I couldn’t spend that much time outside because the heat was just killing me. I wished I had had a hat because there is no shade and I could almost feel my brain melting. Never in my life have I experienced heat like that. 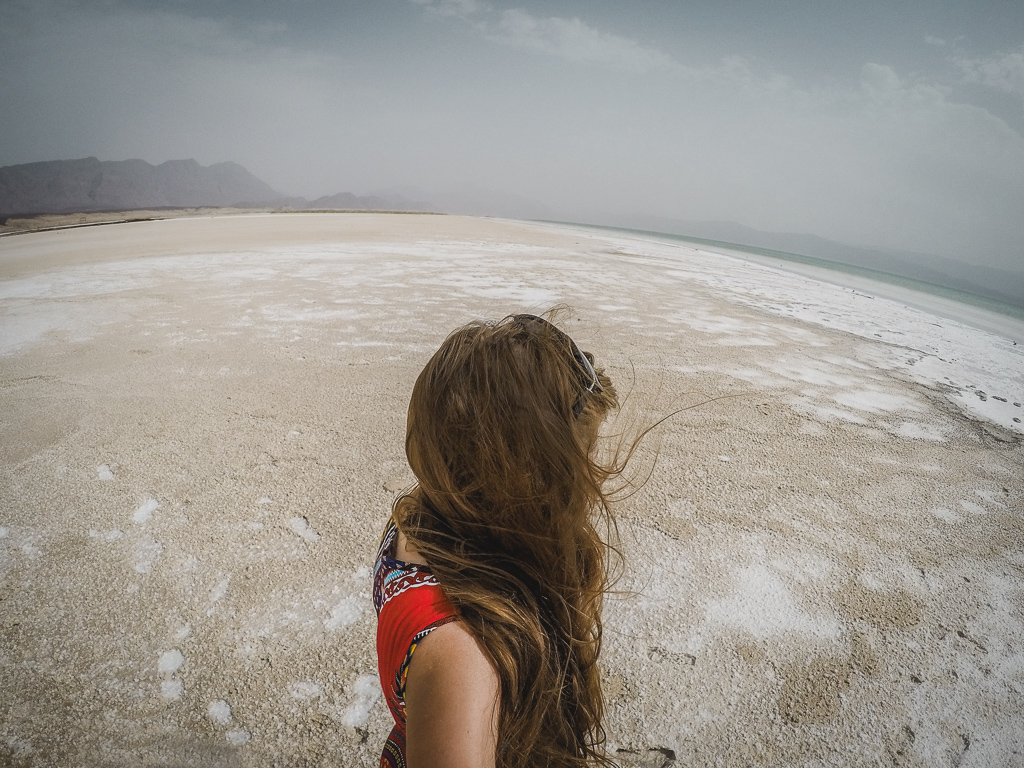 If you visit the lake in the ‘winter,’ you could go swimming there and try floating like in the Dead Sea. I had been prepared to swim there, so I had a swimsuit under my dress. My taxi driver then tried to find possible swimming places for me when we drove back (the sea is just next to the lake) but they weren’t particularly that nice, so I just skipped swimming.

Where to Stay in Djibouti

As I mentioned before, Djibouti is an expensive place. The cheapest hotel you can find in the capital is called Hotel Horseed. I paid nearly $40 for a very basic room with shared bathroom. The bathroom was small and dirty with no toilet paper, and the shower only had hot water. This was probably the only time in my life when I complained about shower only having hot water, but when the outside temperature was nearly 50 °C (122 °F), the only thing I wanted to do was to take a cold shower. The room had an air-condition at least, and the wifi was kind of working (quite slow but still working). You can’t book this place online, so your only hope is just to turn up there and hope that they have rooms available.

If you would like more of a luxury stay, there are two hotels in Djibouti I can recommend: Djibouti Palace Kempinski and Sheraton Djibouti. These are also the only places in town where you can find a swimming pool (okay, there’s also a hotel called Les Acacias, but it’s not that good). I went to Kempinski just to use their swimming pool, and the hotel looked very nice.

Getting Visas for Somaliland, Djibouti, Sudan, and Egypt...

10 Pictures That Will Make You Want to...

The Best Hostels in South Africa

Wow, it seems like Lake Assal is a beautiful place, in spite of it being not too pleasant due to the weather. Thanks for sharing your experience there. Maybe someday you’ll be back in winter and can go swimming! 😉

Wonderful photos! What an amazing adventure, though expensive. But sometimes it can be worth it. I was melting just reading about the heat. Thanks for bringing this hidden gem to everyone’s attention.

love the contrast of this place vs the dead sea. and the fact you were there at the height of summer too! love it.